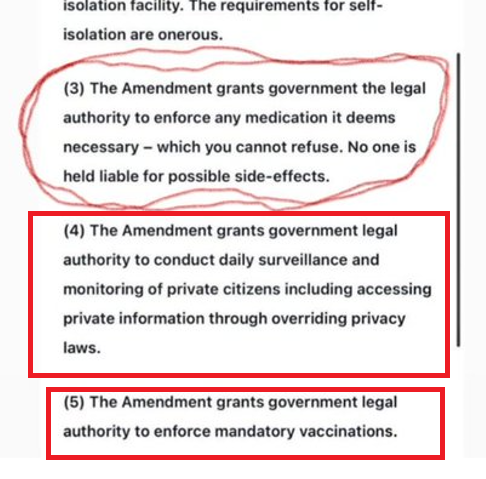 Big Tech is still trying to control the message, they do not want anyone to find out how deadly the Covid injections are. But German vaccine-injury insurance claims and 1250+ peer-reviewed studies reveal what Big Tech is trying to keep hidden.  To add to Big Tech’s woes, Canadian court documents reveal that travel bans imposed on the vaccine-free had no scientific basis.

Africa is waking up to Big Pharma and the “world government.”  In the USA, 130 coast guards take legal action against vaccine mandates. Italy makes a resounding U-turn and announces all medical staff who had been suspended for not having a Covid injection can return to work. And some good news out of Israel – Israelis refuse to inject their youngest with expired gene therapy drugs.

We tried to run a simple two-question survey to find out just how safe or unsafe the vaccines are. Google refused to let us ask the questions.

Clearly, they don’t want anyone to know the truth. The only truth they want you to know is what the government tells you.

Social Media Continues to Try to Control the Message

On Thursday, July 21, in the lead-up to World Ivermectin Day, Twitter permanently suspended the World Council for Health from the platform without warning.

Stephanie Seneff, a Senior Research Scientist at MIT who published a recent paper with Dr. Peter McCullough looking at whether mRNA vaccines may be causing illness and death, had her account suspended last week as well.

The list of attendees at this ‘blocked party’ is, truthfully, too hard to keep up with.

Google Is a Vaccine Company and They’re Harvesting Your Data

Robert F. Kennedy Jr. said that Google is a vaccine company as its parent company, Alphabet, has a series of subsidiary companies that manufacture vaccines and has partnered with other pharma companies. Google has a $761 partnership with Glaxo.

Google is harvesting medical information, including coughs and other information picked up by Siri’s surveillance system, and then they sell it to pharma companies.

The cesspool of vaccine side effects in Germany is finally completely open. According to the Dutch news site, Blckbx,five months after a WOB* request, it appears that 437,593 of the 11 million insured persons of the country’s largest Health Insurance fund, Techniker Krankenkasse (TK), had to undergo medical treatment in 2021 for Covid vaccine side effects. That is 1 in 25 and an increase of 3000 per cent.

*A WOB (Wet Openbaarheid Bestuur) request is the Dutch equivalent of a Freedom of Information request.

A case study of a 73-year-old Japanese woman who received two doses of the Moderna Covid “vaccine” was published in the Journal of Diabetes Investigation (“JDI”) in January.  The Covid injection has been reported to potentially cause or worsen diabetes, the study authors wrote.

“Although most of the cases concluded to be the onset or exacerbation of type 2 diabetes occurred early after the first or second vaccination, the diagnosis of type 1 diabetes took a relatively long period (4–8 weeks) after the second vaccination, including the previously reported case as well as the present case. The difference in the duration between the vaccination and the onset of hyperglycaemia could imply multiple and complicated mechanisms for the development of hyperglycaemia associated with the vaccination.

“The administration of adjuvants to individuals genetically predisposed to the disease can cause serious adverse effects through activation of autoimmune cascades and pathways, which is called autoimmune/inflammatory syndrome induced by adjuvants (ASIA syndrome).

“Although Moderna Covid-19 vaccine does not contain any additional adjuvants, polyethylene glycol lipid conjugates contained in the Covid-19 mRNA vaccines might act as an adjuvant and induce autoimmune responses, and mRNA appears to have self-adjuvant properties.

“In recipients with the disease-susceptible haplotypes, one should be cautious about autoimmune responses for several months after the vaccination.”

On August 13, 2021, the Canadian government announced that anyone who hadn’t been vaccinated against Covid would soon be barred from planes and trains. In many cases, The Backward could no longer travel between provinces or leave the country.

If you lived in Winnipeg and wanted to visit your mother on her deathbed in London or Hong Kong or, perhaps, Quebec City, you’d better get jabbed—or resign yourself to never seeing your mother again.

The Canadian Medical Association Journal, in a June 2022 article, observed that “Canada had among the most sustained stringent policies regarding restrictions on internal movement.”

But recently released court documents—which capture the decision-making behind the travel mandate—indicate that, far from following the science, the prime minister and his Cabinet were focused on politics.

The court documents are part of a lawsuit filed by two Canadian residents against the government. Until last month, they were under seal.

Both plaintiffs are business owners. Both have family in Britain. Both have refused the vaccine on the grounds of bodily autonomy. Both were reluctant to identify their businesses out of fear of losing customers.

Africans Rising Up Against Big Pharma and World Government

Africans are waking up to the dangerous agendas being pushed by Big Pharma and the one-world-order crowd, South African journalist and Children’s Health Defense Africa Chapter Executive Director Shabnam Palesa Mohamed told The New American in Conversations That Matter.

Africans were already sceptical of governments, international organizations and corporate colonialists. But the Covid pandemic has super-charged that awakening. Still, globalist institutions are fighting back, working to undermine the sovereignty of African nations.

Click on the image below to watch the video on Rumble.

“Some of the people are not aware of the relationship between the proposed National Health Regulations amendments that the South African government is pushing in line with the attempt to have an African Pandemic Preparedness Treaty which in itself speaks to the proposed global Pandemic Preparedness Treaty,” Sabelo Sibanda explained in the video below.