Our next chart shows how crucial the $1800 level is for gold. The 55-day moving average stands at $1790, and the 12-month at $1830. Gold needs to move above the latter level with conviction before technical analysts will turn convincingly bullish. But so far, the pattern is looking positive. 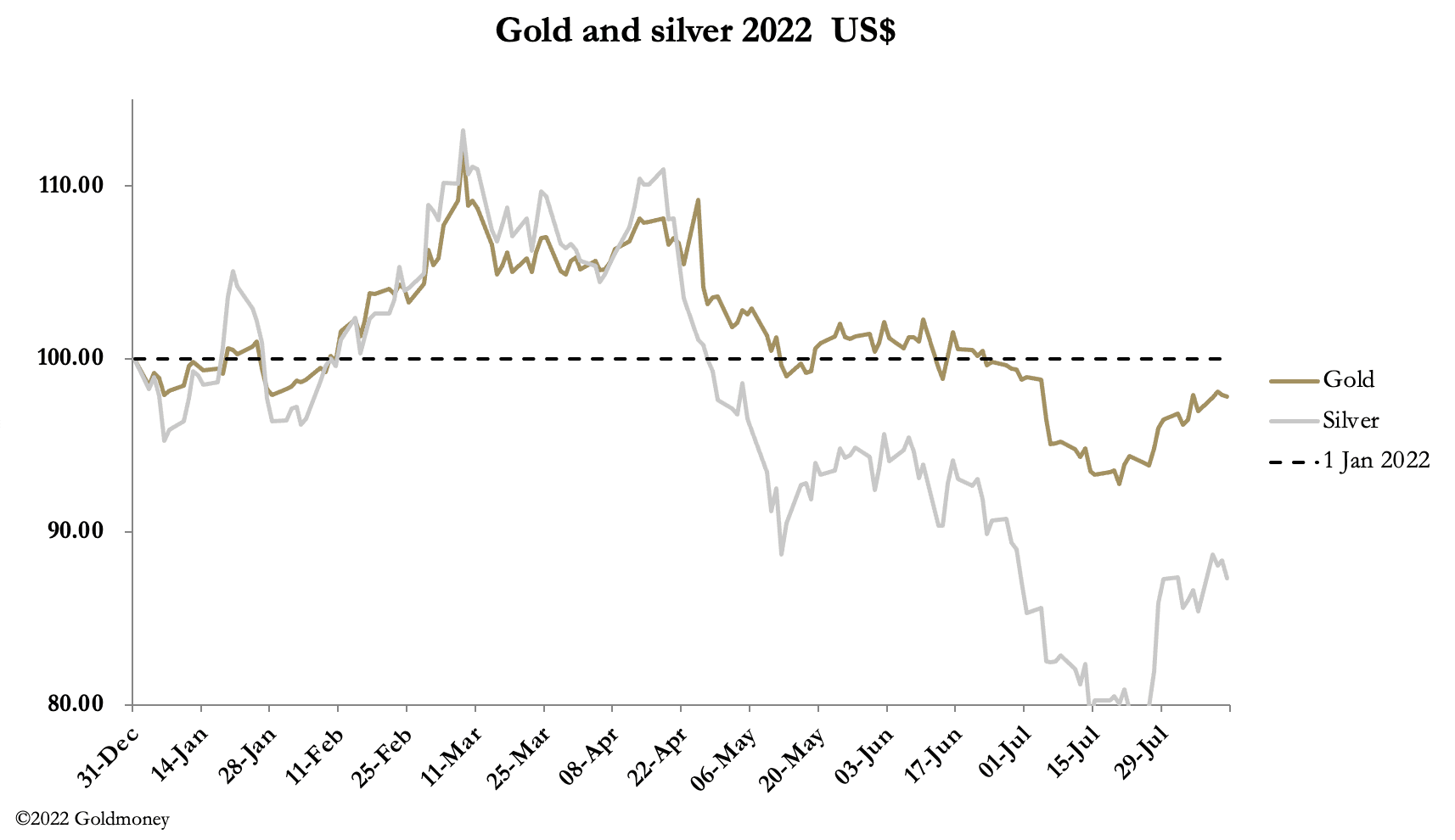 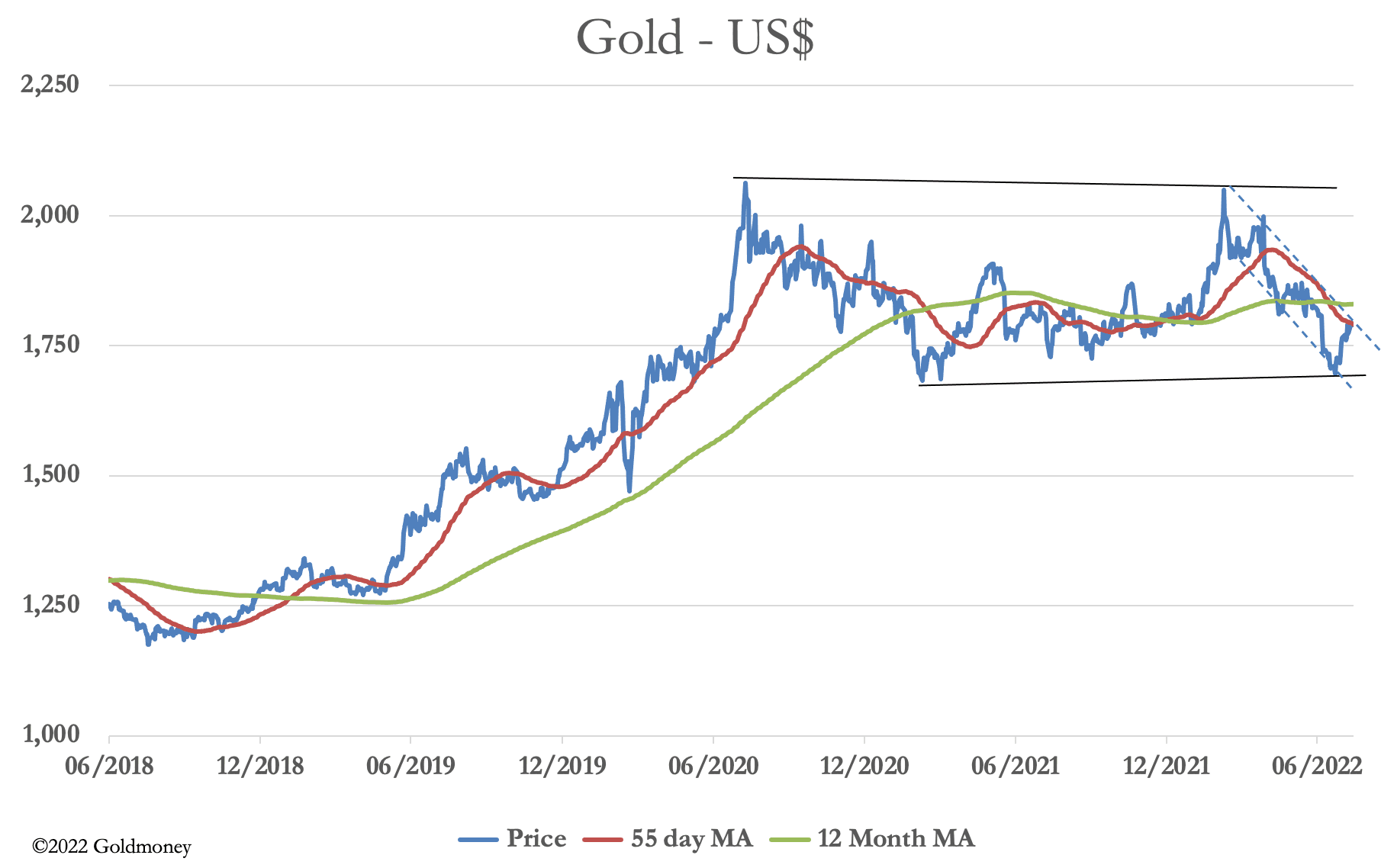 The problem for hedge fund traders is that the dollar’s trade weighted index has been rising due to euro, yen, and sterling weakness. They are primarily interested in currency crosses. While the dollar’s TWI has backed off in a general consolidation of commodity and bond yield rises benefiting the weaker currencies, it feels like a pause in this bear phase for non-USD currencies.

While traders are dithering over dollar prices, in the other major currencies gold is not too shabby, as our next chart illustrates. 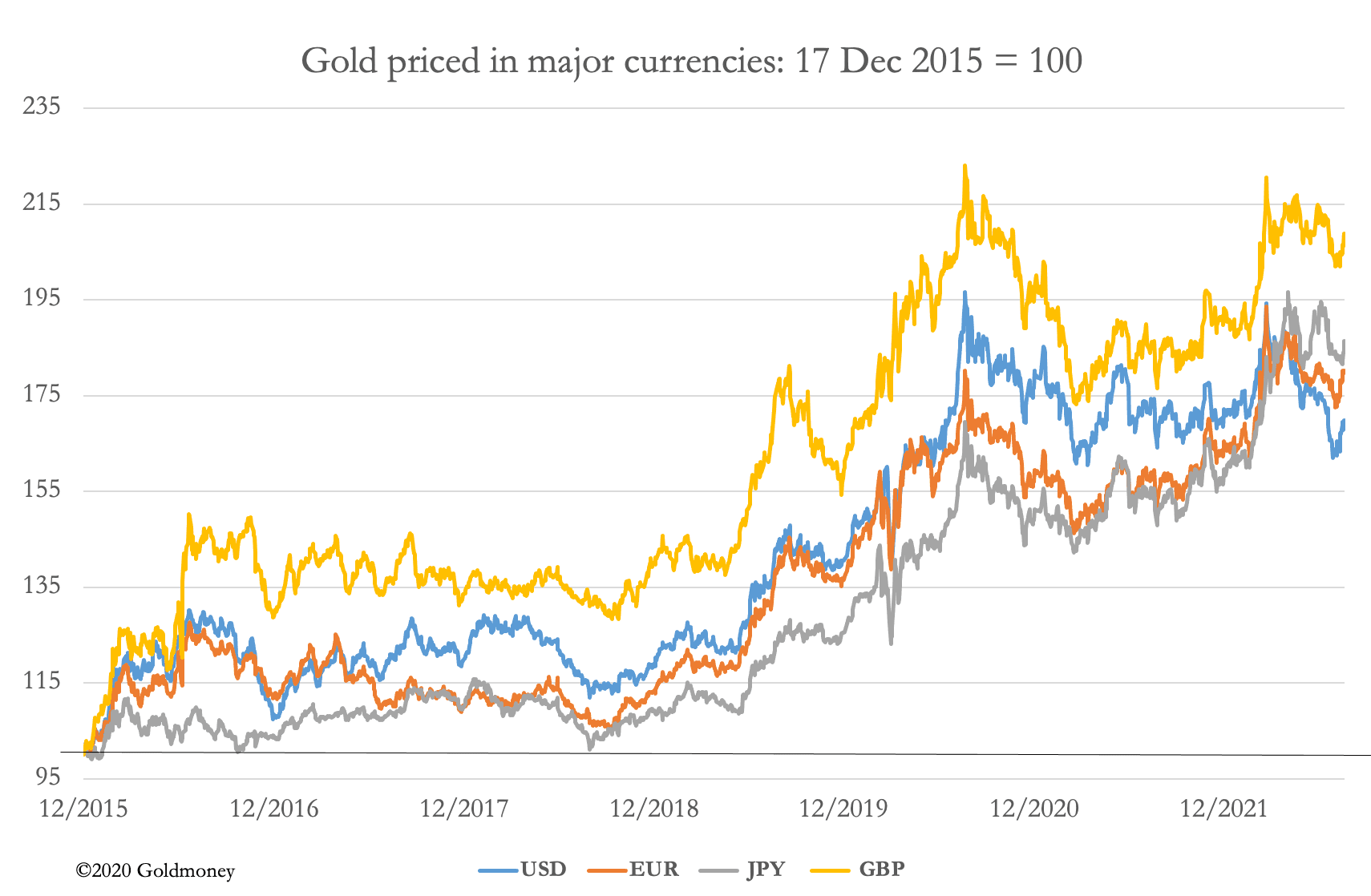 Since the start of the current bull market for gold, in dollars it has risen by 69%, but in sterling by 109%, with the euro and yen prices up 80% and 86% respectively. Given the uneasy calm in currency markets, gold’s gains so far make sense.

If we turn this chart the other way up, to reflect the fall in these currencies against gold, this argument shows a more relevant economic perspective. 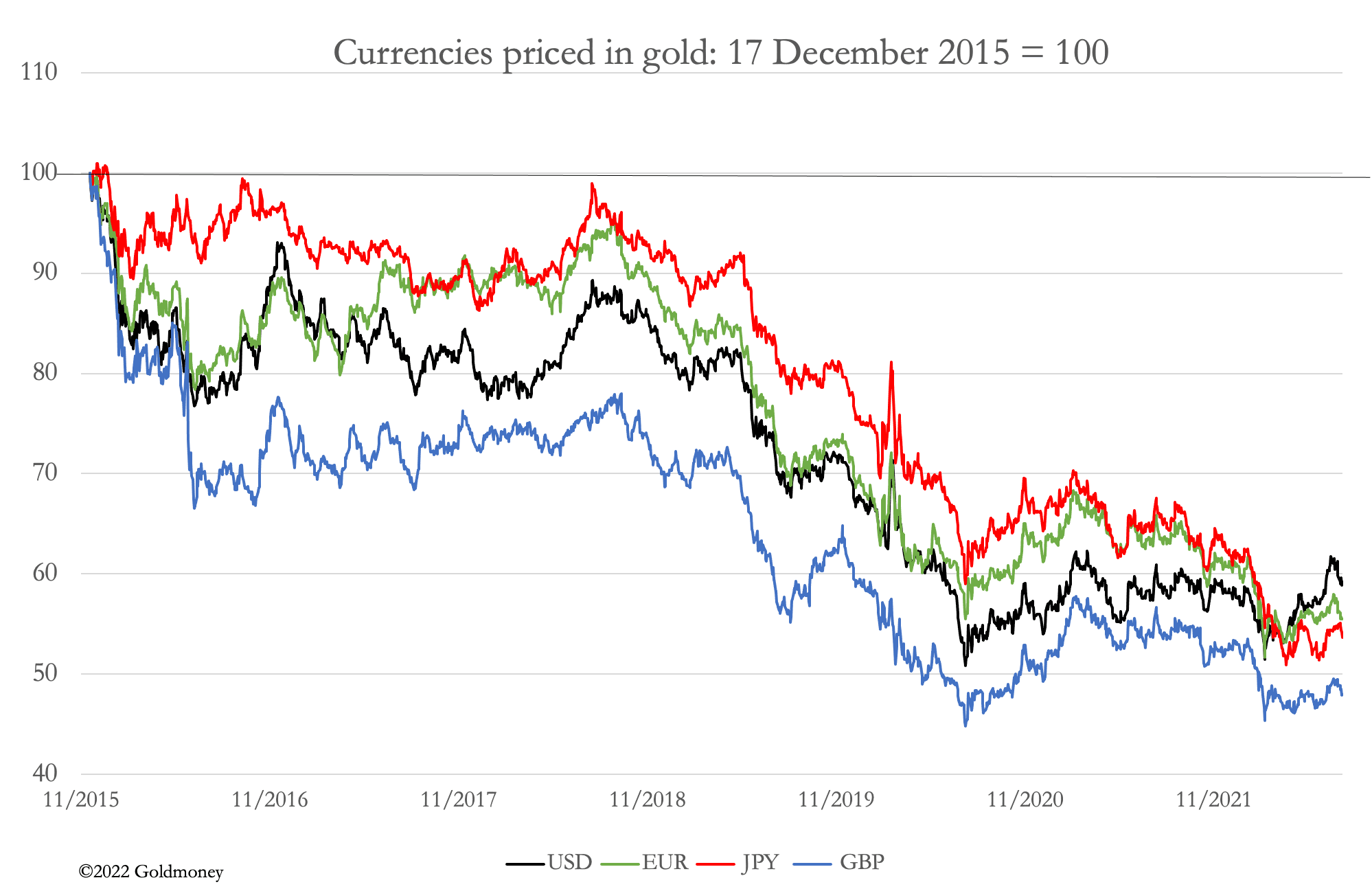 We can now see the consequences of monetary inflation and how it has eroded purchasing power. Remember, that in spite of what the investment establishment believes, that legal money, as opposed to fiat credit, is and always has been gold coin. Gold is the only valid measure of a currency’s purchasing power. And now we can see that sterling has more than halved, the yen lost 46%, the euro 44%, and the dollar 40%.

So, where is the volatility? Clearly, it is in the fiat currencies, not gold.

The gold/silver ratio has declined significantly from its recent peak of 93 to 88. This is our next chart. 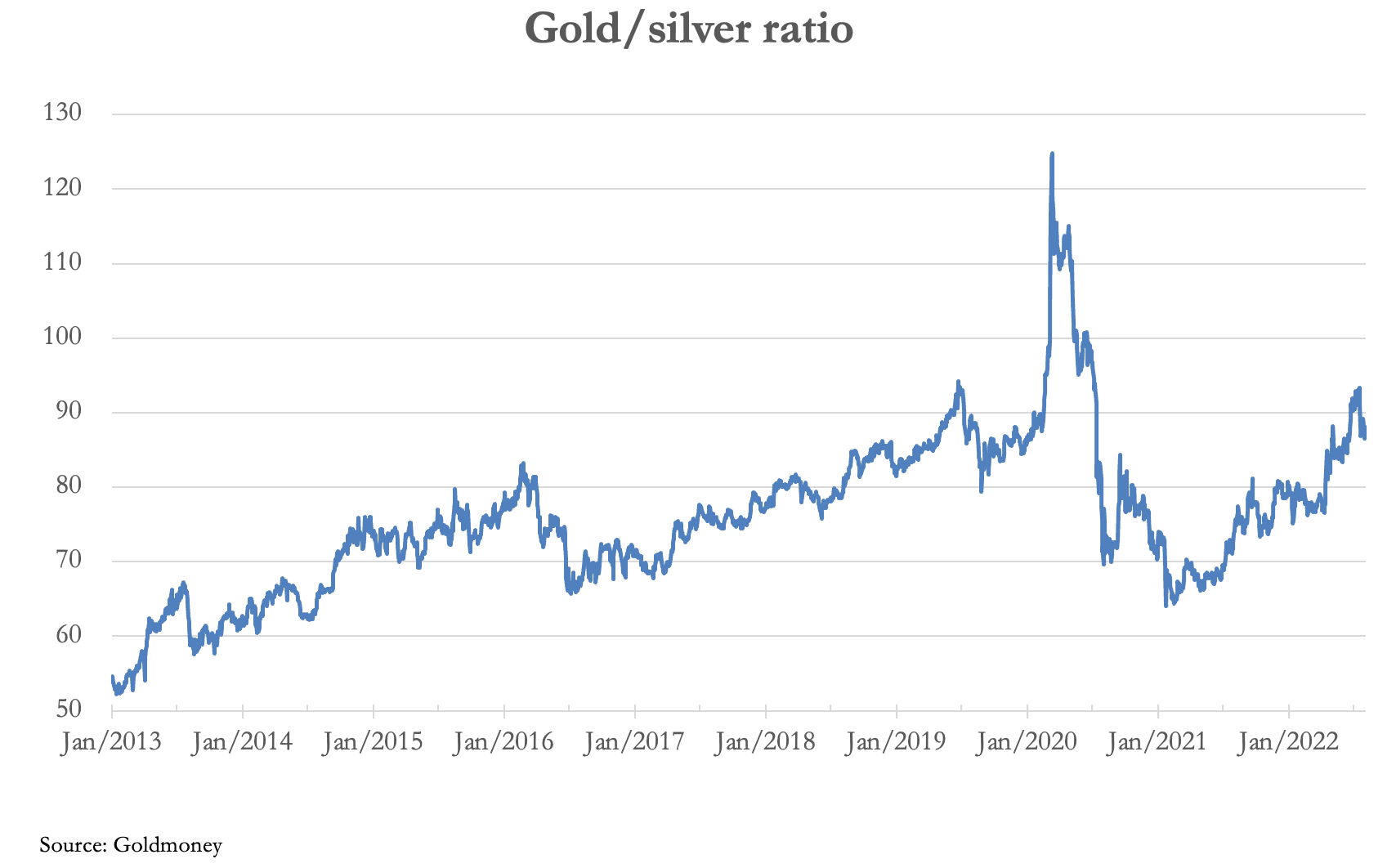 As a rule of thumb. We can expect silver to be nearly twice as volatile as the gold price, and when gold clears the $1800 hurdle, silver should move back to test the $30 level, assuming gold challenges its previous high of $2070.