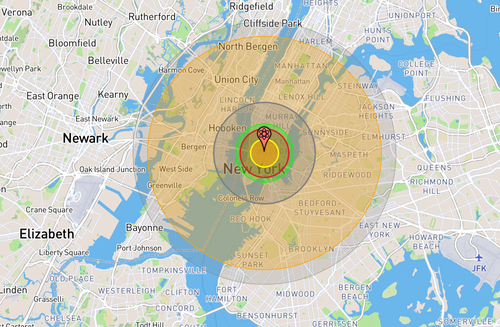 You may have heard about that story that New York City actually aired – for the first time since the 1960s – a televised public service announcement about what to do in case of a nuclear attack.  When I heard about it, I couldn’t help but recall those ridiculous drills I had to do as a very young boy in grade school, crouching beneath my desk and covering my head in case those never-to-be-trusted-and-always-cunningly-byzantine-Rooskies-and-their-evil-criminal-mastermind-Vladimir-Putin-I-mean-Nikita-Khrushchev decided to waste one of their h-bombs by dropping one on Sioux Falls, South Dakota, a key metropolitan center to any protracted American war effort… NOT.

I thought the whole thing was ridiculous then, and I still do. I was one of those enfant terrible kids who kept asking awkward questions in class, like, “why don’t the trees just grow taller by evolution to escape the giraffes growing longer necks thanks to evolution, which seems to explain everything and nothing all at once by arguing in a circle?” and “why would the Russians want to bomb Sioux Falls? There’s nothing important here”, and “since when do bullets do that?” when I saw the cute cartoon diagram of the magic bullet in our local newspaper after the lie that was the Warren Report came out.

Fortunately, the local school board seemed to have come to its senses after the second grade, and quit making us duck and cover. Mind you, we still had fire drills, where we would all have to exit the building quickly, and stand outside  on the playground.

I can’t help the impression that, after the covid planscamdemic sputtered to a halt, the  great reset appears to be encountering the great resist, and in general all the schemes of Mr. Globaloney appear to be laughed at more than taken seriously, that Mr. Globaloney – running out of new tricks – has reached to the very bottom of his bag of dirty tricks to dust off a helpful old stand-by: the nuclear apocalypse (story courtesy of V.T.):

Peace advocates on Tuesday derided a New York City public service announcement meant to prepare residents for a nuclear attack as a 21st-century version of the absurd Duck and Cover civil defense film of the early Cold War era.

“So, there’s been a nuclear attack,” the narrator of the NYC Emergency Management video begins. “Don’t ask me how or why, just know the big one has hit.”… “So what do we do?” she continues before instructing viewers to “get inside, fast,” “stay inside… and get clean immediately,” and “stay tuned; follow media for more information.”…

“All right? You’ve got this,” the woman assures viewers.

While New York City Mayor Eric Adams called the PSA a “great idea,” some critics accused officials of unwarranted fearmongering amid increased nuclear tensions with Russia over its invasion of Ukraine and NATO’s response.

Others lambasted the PSA as latest in a line of nuclear war informationals like the U.S. Civil Defense Administration’s Duck and Coverand the British government’s Protect and Survive films that offer little more than delusive contentment for millions of people who likely would not survive a full-scale thermonuclear attack.

“The reality is, if this comes to pass, you don’t ‘got this,'” tweeted the International Campaign to Ban Nuclear Weapons (ICAN), which was awarded the 2017 Nobel Peace Prize for its work leading to a landmark treaty outlawing nukes.

Calling the PSA “outrageously misguided,” ICAN said it’s difficult to get inside fast during a nuclear explosion “when, in a matter of seconds, houses up to 175 kilometers away from the epicenter crumble like they are made of cards.”

According to NukeMap, a single Russian 800 kiloton warhead airburst over midtown Manhattan would destroy or severely damage much of New York City and cause an estimated 4.5 million casualties.

A higher-yield weapon, like the five-megaton warheads atop China’s Dong Feng-5 intercontinental ballistic missiles, would destroy most of the city while killing or wounding around eight million people. In an actual full-scale nuclear war, multiple warheads would likely be launched against a target as important as New York.

Millions of people not instantly incinerated or obliterated by the fireball—which is hotter than the sun’s core—and immense blast wave of a nuclear explosion would suffer severe burns, blinding, lacerations, blunt-force injuries, and, for many, the slow death of radiation poisoning.

And there you have it…

But you’ll note something: the whole analysis of New York City’s “nuclear public service announcement” is predicated on the idea of a large yield nuclear weapon being detonated. This in a city that suffered the 9/11 attacks, which some people to this day maintain were the result of “mini-nukes.”  The fact of the matter is, that the nuclear weapons of Russia and the USA have now entered the period of “dial-a-yield”, and can be made to be quite small. Indeed, nuclear “devices” are so sophisticated now that dial-a-yield is not fiction: one can literally modify the intended yield of a particular device depending on what one wants to accomplish. The trend in nuclear weapons, contrary to the article, is not to larger and larger yields, but the reverse, to smaller and smaller yields   with much more efficient burns, and with commensurately smaller radioactive effects.  We’ve known for a very long time how to design big yields, think only of the Soviet Union’s massive 57 megaton yield Tsar Bomba of 1961.

There’s also another possibility, one that a friend – K.M. – mentioned in private discussion with me, and one with which I concur. If one examines the actual statements of the New York City PSA, they are more condign to the detonation of a low-efficiency low-yield “dirty bomb” than they are of an actual nuclear or thermonuclear detonation.   They are more suited to the detonation of a “home-grown” dirty bomb act of terrorism, than of the nuclear weapons in the arsenals of the world’s nuclear powers. In other words, a narrative is being prepared, perhaps for yet another “false flag” conducted by a desperate – and desperately evil – Mr. Globaloney.

And one final note: why even bother with nuclear weapons any more at all, when a rod of god dropped from a satellite can accomplish similar levels of mass destruction, without all that nasty fall out? One wonders what sorts of PSAs (Public Service Announcements) New York City will concoct for those? Or is the whole point to misdirect people to think of nuclear weapons, and not acknowledge the existence of kinetic weapons at all…  One thinks of that strange “chemical plant explosion” in Tianjing, China, and how everyone – well, almost everyone – said it looked like a mini-nuke going off…