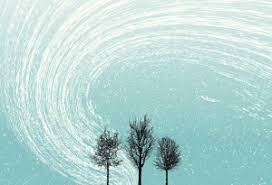 Bacon also pioneered the key understanding of the world as a machine, a development completed by two towering figures of western civilisation, Descartes and Newton. Descartes famously viewed pedestrians in a Paris street hurrying home as ‘machinery cloaked with a raincoat’. Drawn by the era’s yearning for certainty, Descartes perceived how he could “give the public … a completely new science which would resolve all questions of quantity, continuous or discontinuous”.

It made mind more certain for him than matter, and led him to the conclusion that the two were separate and fundamentally different. Newton complemented this paradigm by viewing the cosmos (again) like a machine, governed by immutable laws – a giant cosmic machine, completely causal and determinate.

This history may seem abstract and remote. Yet it is not. Many of us broadly still reside in the ‘new understanding’ outlined above. Yet, if so, we are dinosaurs. Because science has since mutated. The geo-political consequences plague us today.

This mechanical thinking may have made western Europe very powerful then, but taken to extremes (as it has been) and remodelled as a divisive ideology of radical human transformation, it is now taking Europe to disaster (The Fourth Turning). The recent G7 is a clear example. Faced by the innumerable and grave crises in Europe, its’ leaders obsessed about Ukraine, effectively ignoring their disintegrating House – implicitly making plain their indifference to the plight of the peoples’ living within.

What is so new and different today from four hundred years ago? The Renaissance manner of thinking and seeing essentially was conjunctive: the ‘eye’ and intellect, in this tradition, can be pointed towards a ‘something’ (the ‘eye’ and intellect emits its acies), and when it touches this other being, it was, as if one were to meet another person – though this being is what we would now term a ‘thing’ (in today’s world we express something of our self in the personal encounter, and yet, we somehow become transformed by the other’s presence, too. Both interpenetrate and alter the substance of the other.

Enlightenment (that is to say our contemporary mode) of seeing and knowing, however, essentially is disjunctive. The ‘eye’ or the intellect is separated and disengaged from the ‘objects’ under scrutiny. (The Wrong Turning that much of the world – the non-Western world – did not emulate.)

What is fundamental, therefore, is our attention, or put differently, our disposition, towards the world. The mode of attention we bring to bear on the world changes what kind of a ‘thing’ comes into being for us. In that way, it changes the world. And, in that way too, we create ‘our World’, (or at least our representation of it). If we determine to imagine the world as machine, then ‘reality’ will present itself as a machine.

This is how ‘it is’. With the G7’s political leaders off in orbit on some imagined ‘representation of the world’, they are seemingly unaware of what they wrought: They do not hear or see. They are in thrall only to the plaudits of peers in their credentialled bubble. i.e., the like-minded.

Moral philosopher Alasdair MacIntyre in After Virtue, makes the point of how these ‘chaotic’, disintegrative forces of today have very nearly obliterated moral inquiry from European culture. The contemporary characteristics of shrillness and interminability of debate stand as the direct outcome to this catastrophe (the Enlightenment) in our past, he writes. A catastrophe so great, MacIntyre notes, that the very vocabulary of moral inquiry has been very nearly exorcised from our language.

Any moral discussion today, given a group of sufficient diversity, has the potential of escalating into a shouting match … or worse (fistfight, cancellation, ruin …). But the more striking feature of moral debates is their tendency never to reach resolution: Lines are drawn early, and participants rush to take sides. But in taking sides they appear to render themselves incapable of hearing the other. “Everyone feels the heat, but no one sees the light”.

Well, one consequence, as Professor Neil Kutzman has noted, is the contamination of Newtonian Science. Science advances by questioning the current state of knowledge. Consider the fracas between Albert Einstein and Niels Bohr on the implications of quantum mechanics. Einstein constantly peppered Bohr with a litany of objections. Eventually, Bohr and others were able to answer all of Einstein’s objections to quantum mechanics, but the field was immeasurably advanced by having to deal with the complicated and sophisticated issues raised by Einstein.

Science, by its very nature therefore, is never settled. The answer to any problem is not only subject to future modification, but it also invariably raises many more questions than it answers. Yet, many of the great scientific issues of today are governed by dogma rather than debate – and with the cancellation of those questioning “The Science”.

This is understandable because the ‘new ideology’ coming from Silicon Valley and Davos has turned the Newtonian world literally ‘inside out’. The ‘new wisdom’ which emerged in the wake of cybernetics revolution of the 1960s asserted that technology ‘grows’ with life, yet quite detached from it, as a synthetic and deterministic ‘elan vital’ without any regard for human thought or free will.

This will seem alien to the experience of most readers, but Science is, in this new vision, no longer at the service of humanity: The human mind, in an influential segment of the West, is viewed as nothing more than the sum of its’ non-living atoms; something apart from advancing technology as an autonomous evolving being, on the brink of becoming sentient.