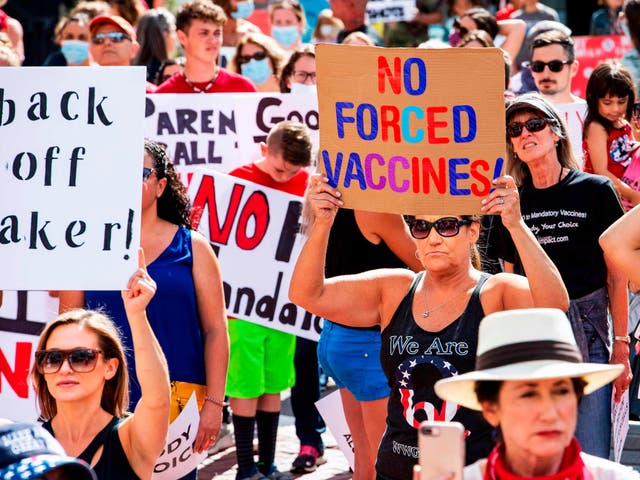 In the interview above, Dr. Andrew Wakefield and Mary Holland, president and chief legal counsel for Children’s Health Defense, discuss their new documentary film, “Infertility: A Diabolical Agenda,” which we published yesterday. If you missed it, you can watch it here.

“Infertility: A Diabolical Agenda” is Wakefield’s fourth film. The first was “Who Killed Alex Spourdalakis?” followed by “Vaxxed” and “1986: The Act.” This latest film details the World Health Organization’s intentions to produce an anti-fertility vaccine in response to perceived overpopulation, and how such vaccines have been used without people’s knowledge or consent since the mid-’90s.

“It’s a very important story, and it’s a story that I’d been aware of for some years,” Wakefield says. “I think a lot of people heard about this intentional infertility vaccine program being conducted, primarily in women in developing countries such as Africa. But it had gone into abeyance so I hadn’t paid due attention.

I should have paid more attention to it, because people had asked me over the years, ‘Do you think there is a population control agenda?’ …

The allegation had been that the World Health Organization, under the guise of a neonatal tetanus prevention program, had been deliberately sterilizing women [in Kenya] — either using a vaccine to abort existing pregnancies or to prevent future pregnancies. They had done this under the guise of protecting children rather than actually reducing the population.”

As explained by Wakefield, it was no secret that the WHO had been working on an anti-fertility vaccine since the 1970s.1 Papers were published, and the WHO itself even admitted it. The real issue here is that of informed consent. The WHO has been caught more than once deliberately deceiving women into thinking they were vaccinated against tetanus, when in fact they were being sterilized. This is an ethical and moral low that is hard to beat.

The story detailed in this film begins in 1995, when the Kenyan government launched a WHO vaccination campaign against tetanus among women of childbearing age. Dr. Stephen K. Karanja, former chairman of the Kenya Catholic Doctors Association, became suspicious of the program when he learned that involuntary sterilization programs posing as tetanus programs had occurred.

That same year, 1995, the Catholic Women’s League of the Philippines actually won a court order halting a UNICEF tetanus program that was using tetanus vaccine laced with hCG. Anti-hCG-laced vaccines had also been found in at least four other countries.

This anti-hCG-laced tetanus vaccine perfectly matched the anti-fertility vaccine the WHO had announced in 1993. The paper trail reveals that by 1976, WHO researchers had successfully conjugated, meaning combined or attached, human chorionic gonadotropin (hCG) onto tetanus toxoid, used in the tetanus vaccine. As a result, when given to a woman, she develops antibodies against both tetanus and hCG.

HCG is a hormone that is produced as soon as the sperm enters the egg and the embryo begins to form. In response to this signal, the woman’s ovaries then produce progesterone, which maintains the pregnancy to term. The conjugated vaccine effectively ends and prevents pregnancy as her own immune system will immediately attack and destroy the hCG as soon as it forms.

At the time, Karanja, who passed away in 2021, convinced leaders of the Catholic Church — one of the largest health care providers in Kenya — to test the tetanus vaccine being given, to make sure there was no foul play. Without explanation, the WHO abandoned the 1995 campaign, but in 2014, they were back with a neonatal tetanus program.

Girls and women, 15 to 49 years of age, were instructed to get vaccinated with a series of five injections, six months apart. Suspiciously, this is the exact schedule required for the anti-fertility vaccine to produce sterility. Regular tetanus prevention requires only one injection every five to 10 years, and under no circumstance would you need five of them.

The Catholic Church decided to test the vaccines and collected three sample vials directly from clinics during the 2014 campaign. The samples were tested by three independent laboratories and, as feared, they contained hCG. Another six vials were then collected and tested. This time, half were found to contain hCG.

When the Catholic Church went public with the findings, urging girls and women to not comply with the vaccination campaign, the Kenyan government went on the defensive, insisting there was nothing wrong with the vaccine. Wakefield says:

“They used the media to demonize the Catholic Church and insinuate there had been deliberate contamination of these samples with hCG to produce the result they wanted.

That’s where it remained until — and this is where it gets really interesting and where the film really comes into its own — our cameras were invited back into the laboratory where these tests were done … [and] the truth was revealed.

It came down to a resolution of this key question of who was lying and who was being honest? Who was cheating, who was not? It’s really an extraordinary story that woke me up to the importance of this issue. There is an extraordinary prophetic statement at the end from the late Dr. Karanja, OBGYN from Africa. who was at the heart of all of this.

He said, ‘When they are finished with Africa they’re coming for you’ … That’s probably a pertinent place to hand over to Mary, because never could a prophecy have been more apt, more true.”

“It’s been very hard to answer … when people would ask us, ‘Is there a depopulation agenda?’ People would point to things Bill Gates said, like how vaccines would reduce the population. There was an interpretation that it was going to make people healthier, and therefore they would choose not to have more children.

It was murky. I think this film really helps us understand that this is not a conspiracy theory. It’s an absolute reality … The film makes that 100% clear. There’s just no question about it. And you see the deceit and deception. Just to point out, the Rome statute for the International Criminal Court that most countries of the world have signed onto … makes forced sterilization a war crime.

This is not a trivial thing, to deprive people of informed consent and to sterilize them. That’s exactly what happened. One of the interviews in the film that is so poignant is of a woman who cannot carry a pregnancy to term. She comes to realize that she has antibodies to hCG, and she realizes that somebody, somewhere, made her infertile. It is, as she calls it, a diabolical agenda …

We can now look back at what happened with the human papillomavirus (HPV) vaccine, which I co-wrote a book about in 2018. One of the things we saw was that … the teen pregnancy rate dropped 50% from 2007 to 2018 — 50%! Now, whatever one wants to think about unplanned pregnancies, that is a staggering drop over 10 years.

People were reporting extreme reproductive effects from the HPV vaccine. Now we’re hearing the same thing, only much more so, with respect to COVID shots. We’re hearing that women are having miscarriages, babies are literally dying from breastfeeding mothers who have been recently vaccinated.

Congenital deformities are being reported to the vaccine adverse event reporting system (VAERS). It’s now, I think, beyond the realm of conspiracy theory to say it is very plausible that these vaccines that are being pushed on the world — particularly the COVID shots — have strong anti-fertility effects.”

Is There Such a Thing as Vaccine Safety?

It’s important to realize that no study has ever proven that any of the vaccines on the childhood vaccination schedule are safe, especially when given in various combinations. As noted by Wakefield, vaccine manufacturers and people like Dr. Anthony Fauci present “an almost kindergarten-like approach” to safety.

The blanket statement given is that vaccines in general, and the COVID shots in particular, are “safe and effective,” and that they have no adverse effects on reproduction and fertility. This, despite the fact they’ve done no reproductive studies at all.

Women who hear such assurances will assume the necessary studies HAVE been done when, in fact, that’s a complete lie. The reality is, you cannot find evidence of harm if you’re not looking for it. Another reality is that assumptions and guesses about science are not the same as scientific evidence. One major assumption that has now turned out to be completely wrong is that the mRNA injection stays in the deltoid muscle, the site of injection.