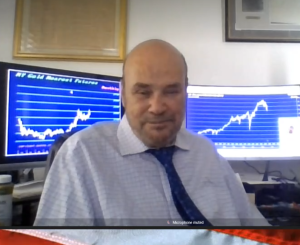 Legendary financial and geopolitical cycle analyst Martin Armstrong says, “If my computer had legs, it would hide under my bed.”  That’s how bad things are looking for the rest of 2022 and 2023, according to Armstrong’s “Socrates” program that foresees future geopolitical and economic trends and events.  Let’s start with war that is already underway with Russia.  Armstrong says, “They wanted war.  It’s all been provoked, and it’s intentional. . .”

Armstrong points out, “Ukraine President Zelensky already has hundreds of millions of dollars stashed off-shore.  He’s been offered a golden parachute, and he’s willing to fight until the last Ukrainian dies on the battlefield.  This is nothing more than a proxy war between the United States and Russia, and they know that.  Russia knows Ukraine is not the enemy.  It is the United States.”

How close are we to all-out war with the U.S. directly involved against Russia?  Armstrong says, “I can tell you I have a friend whose brother is in the U.S. military here, and they have already been told to prepare for war.  The U.S. is shipping more troops over to Europe.  They are not shipping troops to Ukraine, but to NATO countries.  They want war.”

So, are higher energy prices coming?  Armstrong says, “They need to get gas prices to $10 a gallon so people will drive less, and that way they can get their electric cars.  This is the insanity of what is going on in Washington.”

One rumor that Armstrong is hearing from his Washington D.C. sources is talk about granting citizenship to illegal aliens flooding across the southern border with a Presidential Executive Order shortly before the mid-term election in November.  That would allow illegals to vote, and that sort of outright cheating could touch off violence.  Armstrong says, “I am concerned if they pull that and they grant all these people citizenship.  He’s been flying them in and dropping them off in the middle of the night, why are they doing that?  It is to change the election. . . . I am concerned you would be talking about civil unrest going into 2023 that is going to be significant.  You have already divided the country between blue and red to begin with.  They have misrepresented the abortion thing.  Now, with the aliens, how much more are we going to take of this?”

Armstrong talks about the dumbest world leaders he has ever seen.  He also talks about Soros and defund the police.  Armstrong tells us the importance of silver and cash if there is a total break down on the financial system, the disease cycle that started in 2022 and the decline of the global population that will keep falling until 2040.

In closing, Armstrong says, “The higher the gasoline prices, the greater the economic stress and not just in the U.S and EU, I am talking everywhere.  This is why they need war.  They need the great distraction, and that is manufacturing World War III.”

There is much more in the 1-hour and 7-minute interview.