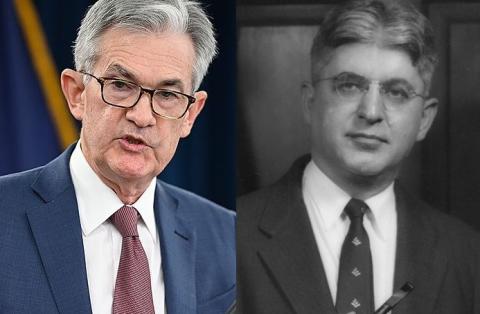 Last year, just as it was becoming increasingly clear that price inflation was mounting, Jerome Powell repeatedly denied there was any reason for concern. He called inflation “transitory.” A few months later, he admitted it was not transitory, but denied it was “entrenched.” Then, by late 2021, he admitted price inflation was getting out of control but still took no action of any consequence. Through it all, the Powell plan was repeated delay and opposition to any lessening of the Fed’s established policy of ramming down interest rates again and again.

In other words, Powell’s Fed is a Fed that does no more than is absolutely necessary to convince the public and policy makers that it is “doing something” about inflation. This is all short-term political posturing, and reflects that fact Powell—like Janet Yellen before him—is a politically minded technocrat who thinks in terms of using the central bank to protect the regime. The regime needs to look like it is “managing” the economy. But the regime also needs low interest rates to keep down interest payments on its massive $30 trillion debt. Powell is apparently more than happy to oblige on all fronts.

When it comes to actually doing something to address the core causes of price inflation, however, Powell seems uninterested. The plan right now is apparently to trust in hope that inflation can be “fixed” with some very minor tinkering with the federal funds rate and the Fed’s portfolio. And then everything will be fine.

This mirrors the thinking of Arthur Burns and his Fed during the 1970s. While inflation mounted in the late 1960s and early 1970s, Burns—who became chairman in 1970—chose to avoid doing anything that might upset the inflation-fueled economy that had prevailed during the previous decade. The result was 12 percent inflation by the mid 1970s and an inflationary period that only came to an end after Chairman Paul Volcker finally had to take the anti-inflationary measures that Burns was unwilling to take.

With his current timid, weak, and prevaricating position on price inflation, Powell is positioning himself as the new Arthur Burns. He’s only interested in doing just enough to get inflation rates down far enough to deflect political pressure from taxpayers, consumers, and others who suffer most from price inflation. It’s nothing more than kicking the can down the road. That is Burns’s legacy, and Powell is embracing it.

Fueled in part by big spending on the Vietnam War and on Lyndon Johnson’s new welfare programs, Consumer Price Index inflation rose from 2 percent in the mid-1960s to 6.4 percent by February 1970. At that point, inflation was at the highest rate it had been since the Korean War. Burns, however, was not exactly one for bold action. Outgoing Fed chairman William McChesney Martin had already attempted to rein in inflation with a rising discount rate in 1968 and 1969. (The discount rate was the key policy rate at the time.) As a result, the discount rate hit 6 percent and a recession ensued. Burns was only too happy to bring rates back down as the 1969–70 recession subsided. Thanks to the short recession—and to the usual disinflationary factors such as growth in worker productivity—price inflation temporarily and moderately declined for the next two years. But by 1973, price inflation was surging again, and inflation hit 12 percent in November 1974. At the worst of it, the Fed raised the discount rate from 5 percent in 1973 to 8 percent in 1974. That looked like it “did the trick” because price inflation then fell back down to 5 percent by December 1976. But then price inflation soon began an upward surge that would not end until 1980. The CPI inflation rate rose from 5 percent in December 1976 to 8.9 percent two years later. It finally peaked in 1980 at 14.4 percent.

In other words, Burns’s methods did not bring inflation under control for anything more than the short term. Nor did Burns’s policies bring robust growth, as the country endured another recession from 1973 to 1975, and again in 1980. Stagflation set in. Meanwhile, the Burns Fed, much like the Powell Fed, sought to portray price inflation as a temporary matter related to short-term shocks. As noted by Ricardo Reis:

[Burns] thought the inflation of 1973 was due to food and oil prices, and the further increase in 1974 was due again to budget deficits (even though those had been small). There was always a temporary shock to explain the persistent drift. Meltzer (2005, 160) describes this period as one when, among the Federal Reserve staff, “they gave special explanations—a relative price theory of the general price level—in effect claiming that the rise in the price level resulted from one-time, transitory changes that they did not expect to repeat.”1

Arthur Burns would have been right at home in the Powell Fed, where inflation is to be blamed on temporary one-time events such as logistical supply shocks and the Russian invasion of Ukraine.

It was only after Paul Volcker was installed as the new Fed chairman in August 1979 that the Fed would take the drastic action that was needed.