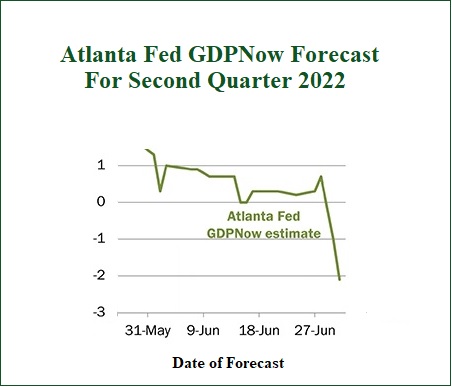 The Department of Commerce’s Bureau of Economic Analysis (BEA) will release its advance estimate for U.S. Gross Domestic Product (GDP) for the second quarter of 2022 at 8:30 a.m. on July 28. All eyes on Wall Street will be glued to that number as a gauge of where stock prices are headed.

As of this morning, the highly respected number crunchers at the Atlanta Fed’s GDPNow model are forecasting a contraction of -2.1 percent in U.S. economic growth in the second quarter. (That’s the real GDP growth/seasonally adjusted annual rate.) The Atlanta Fed’s GDPNow modelers will update their forecast five more times, based on additional economic data releases, before the advance estimate for second quarter GDP is officially released by the BEA on July 28.

GDP contracted at a -1.6 percent annualized rate in the first quarter. Two quarters of negative GDP growth has been the criteria on Wall Street for characterizing the economy as in recession. The definition of recession at the National Bureau of Economic Research (NBER) is “a significant decline in economic activity that is spread across the economy and that lasts more than a few months.” NBER’s Business Cycle Dating Committee is the official word on classifying when a U.S. recession has begun and ended.

The S&P 500 closed out last year at 4,766.183. If it were to reach 3,000 this year, that would be a year-to-date loss of 37 percent – and that could actually be the good news compared to what is likely to happen to Nasdaq if there is a significant GDP contraction.

The Nasdaq composite index closed out last year at a reading of 15,644.97. The Nasdaq closed Friday at 11,127.85 – a year-to-date decline of 29 percent. A GDP contraction would be likely to hit the Nasdaq much harder than the S&P 500 because the Nasdaq is stuffed with tech companies trading at lofty price-to-earnings multiples; numerous companies with negative earnings histories; many companies paying no dividends; and companies which should have never been brought to public markets in the first place. (See our report: SEC Chair Jay Clayton Left Markets in the Biggest Mess Since 1929.)

According to a study (see Table 9) released last year by Professor Jay Ritter in the Department of Finance at the University of Florida, there were more traditional IPOs with negative earnings issued in the four years of the Trump administration than at any time in the last 40 years. (The study only goes back to 1980.)

The study focuses on traditional IPOs and eliminates the following: “IPOs with an offer price below $5.00 per share, unit offers, ADRs, closed-end funds, partnerships, acquisition companies [SPACs], REITs, bank and S&L IPOs, and firms not listed on CRSP [Center for Research in Security Prices] within six months of the offer date are excluded.”

Morgan Stanley is not the only trading house on Wall Street that is making bold predictions of what might lie ahead for markets. In a communique on July 1, analysts at JPMorgan Chase predicted that “global oil prices could reach a ‘stratospheric’ $380 a barrel if US and European penalties prompt Russia to inflict retaliatory crude-output cuts….”