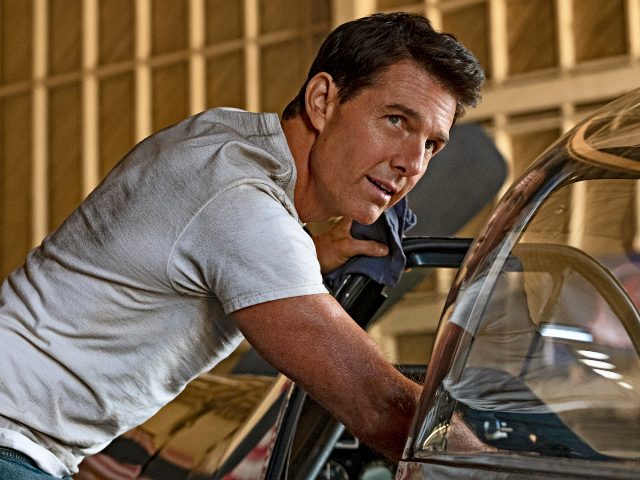 With a domestic take nearing $300 million after only ten days in release, Top Gun: Maverick continues to prove the obvious: moviegoers of all ages will show up in droves if you entertain and inspire us.

Per the far-left Deadline:

Moviegoers aren’t losing that loving feeling for Top Gun: Maverick this weekend as the movie is destined to become Tom Cruise’s top-grossing movie ever at the domestic box office with $273.6M. The 3x Oscar nominee’s previous high earning title was Steven Spielberg’s 2005 sci-fi title War of the Worlds at $234M.

Top Gun 2 is expected to beat War of the Worlds on Saturday; the Joseph Kosinski-directed sequel eyeing a second Friday of $20M, -61% against last Friday (+ previews) on its way to a 3-day of $68M, -46%. Some rival studios see it much higher, but again, it’s still early.

A second-weekend hold of just -46 percent is extraordinary. Most blockbusters dip 60 percent or better. In other words, Top Gun: Maverick has real legs and is almost certainly benefitting from repeat business.

Leftists are already mad that a non-woke movie that doesn’t violate human nature with woke lectures, woke perversion, woke revisionism, and woke emasculation, is not only breaking records but being embraced by wingnuts like me.

Here’s a sneer from Vanity Fair:

Aside from the Defense Department propaganda inherent to most of Hollywood’s military-themed creations, the film is not overtly political in a way that is recognizable to Americans who have grown accustomed to Air Force flyovers at the Super Bowl and World Series. In many regards, Top Gun: Maverick feels like a product of the ’80s—a decade that saw the U.S. invading countries like Grenada and Panama while also in the throes of the Cold War with Russia. And like the original 1986 movie, it is an exhilarating, beautifully produced military recruitment ad that favors neither Republican nor Democratic sensibilities. It manages to portray a conflict over nuclear weapons as downright fun.

Despite acknowledging that he had not seen the film, Breitbart columnist John Nolte preemptively lauded Top Gun: Maverick as a “masculine, pro-American, stridently non-woke blockbuster,” adding, “Rather than apologize for being an ’80s ‘relic,’ it embraced what everyone loved in 1986 and still loves today.” While citing a number of Hollywood’s “woke flops,” Nolte wrote that Top Gun: Maverick avoided that fate by “respect[ing] human nature” and eschewing progressive commentary. “It didn’t do what James Bond did—turn itself into a mewling little pajama boy gerbil of a movie,” he added. “It didn’t do what Star Wars did and pervert a romantic adventure series into a shrill Womyn’s Studies lecture.”

Damn, did I really write all that? Pretty snappy.

Salon is in their favorite position,  besides themselves… “No, ‘Top Gun’ isn’t an anti-woke success story, but rather a tribute to aging Tom Cruise and balls,” reads the defensive headline. And yet “balls” is exactly what’s missing in the growing mountain of woke flops, no?

You know, balls as in masculinity instead of creepy men in high heels.