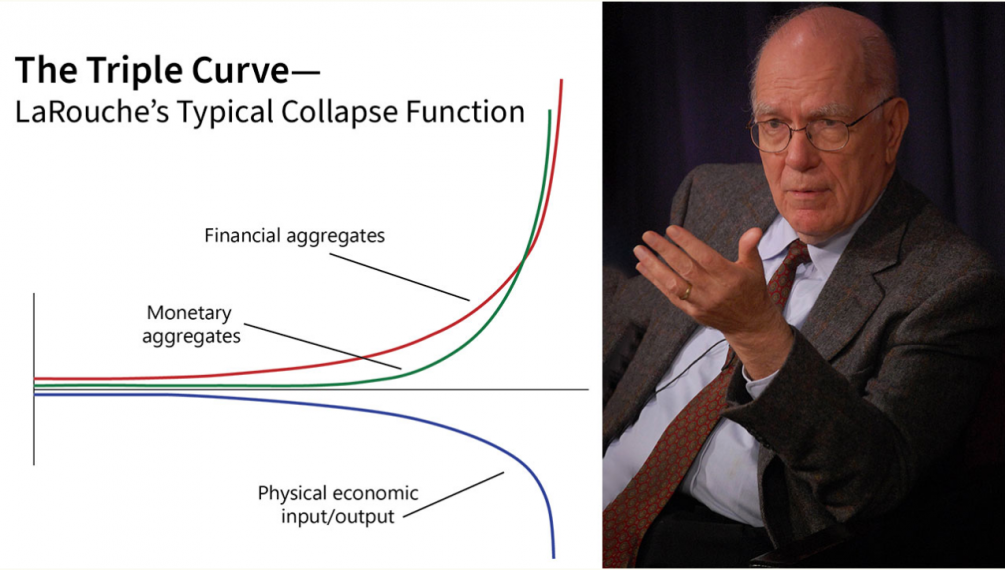 June 10—There is only one competent approach to understanding why the trans-Atlantic economies are in the midst of an inflation spiral threatening hundreds of millions of lives globally: That is to return to the method of analysis developed by Lyndon LaRouche in the unveiling of his “Typical Collapse Function” at a conference at the Vatican in 1995.

In what is also known as the “Triple Curve,” LaRouche rejected the standard axioms of monetary theory, which describe inflation as “too much money chasing too few goods.” Instead, he argued that one must begin with the dynamic interrelationship between three processes: the rise in the volume of financial aggregates, as debt incurred; the rise in monetary aggregates, to provide “liquidity” to service the debts; and the subsequent collapse of physical production, as no credit is available for necessary improvements, or even maintenance, of physical goods production.

Applying this method, he was able to forecast a series of crises which occurred at the end of that decade: the Asian “Tiger” collapse in 1997; the 1998 Russian financial crisis; and the popping of the U.S. “dot-com” bubble in 2000. He also warned of the approaching collapse of the mortgage bubble in 2007–2008. In the latter case, he advocated a broad bankruptcy reorganization. It included a debt moratorium and cancellation of speculative financial assets, and a return to Glass-Steagall banking regulation to protect the function of commercial banks for credit generation, to restore manufacturing and agriculture while protecting homeowners.

Instead, the Bush and Obama administrations bailed out the banks, turning on the monetary printing presses, providing the liquidity which allowed financial institutions to continue to function even though they had unsustainable debt overloads on their books which they could never pay. They were thus enabled to build ever-larger speculative bubbles, while physical production declined further—exactly what LaRouche’s Triple Curve forecast.

What Made the ‘Everything Bubble’

The so-called Obama “recovery,” and the Trump “recovery” which followed, were the result of continuing the flood of money from the Federal Reserve, in the form of low interest rates for banks and financial institutions. This produced what some called the “everything bubble,” in which the real economy stagnated further and, in many areas, continued to contract, while consumer and producer prices rose, as did valuations in equities and real estate.

This reached an existential crisis stage on Sept. 17, 2019, as the major banks which made overnight loans to cover outstanding corporate loans coming due on the “repurchase market”—known as 24-hour “repo” loans—pulled back, fearing a wave of defaults. At that point, the Federal Reserve stepped in, for the first time since 2008, and opened the spigots, unleashing a new wave of liquidity. As reported by Wall Street on Parade, using the Fed’s records for the 4th Quarter of 2019—which were not made public until the end of Dec. 2021—the Fed pumped out more than $13 trillion in emergency “cumulative loans at below market interest rates to the trading units of the megabanks.” Nearly $11 trillion of these emergency loans went to six banks: Nomura, JPMorgan, Goldman Sachs, Barclays, Citigroup and Deutsche Bank, and were extended beyond the 24-hour period, to 14-day, 28-day and 42-day loans—becoming virtually “perpetual loans.”

By the end of the 1st Quarter of 2020, a total of $28 trillion had been extended by the Fed, with nearly $18 trillion going to six banks. This orgy of liquidity pumping to save the speculators occurred months before the COVID-19 crisis hit, and more than two years before Russia’s special military operation in Ukraine, and has continued until the present. As both financial (debt) and monetary aggregates were going through the roof, credit was cut to firms engaged in production, partly justified, by 2021, by the Green agenda! This conforms precisely to the dynamic described by LaRouche in his Triple Curve theory, and explains why inflation is raging out of control today.

On June 3, President Biden was trotted out to present his “plan to fight inflation.” Whoever drafted it showed contempt for the reality of what is causing impoverishment and despair among those hit by inflation. After stating that fighting inflation is his “top economic priority,” Biden said that inflation is a good sign, as it is caused by the strength of the “economic rebound” from the COVID period. This has been the “most robust recovery in modern history,” he claimed, boasting that this is due to his economic policies, which will make the “transition from rapid recovery to stable, steady growth to bring inflation down.”

He added that today, “families are carrying less debt, their average savings are up” and more Americans “feel financially comfortable.” All three of these points are false, as per capita household debt continues to rise, per capita savings has fallen from 16% to 4.5% of disposable income, polls show that over 70% consider inflation the biggest threat, and over 80% say the U.S. economy is moving ”in the wrong direction.”

Biden then pivoted to his real point: Food and gas prices are up due to what he called “Putin’s price hike,” i.e., the result of the “invasion of Ukraine”—ignoring,  among other factors, the effects on inflation of the Congress backing his request to spend over $60 billion to send arms and provide logistical support to Ukraine! Compounding this dreadful disconnect from reality, he said his first rule in making sure the transition works is to give “the Federal Reserve the space they need to operate.”

As Biden was expressing confidence in the Fed, Janet Yellen, the Treasury Secretary who served as the previous chairwoman of the Fed, was admitting that she “failed to see” inflation coming, as she had said it would be “moderate” and “transitory.” In Congressional testimony, she stated that she “didn’t anticipate multiple variations” caused by COVID and the effect on food and energy prices caused by the “Russian invasion.” She concluded, “I do expect inflation to remain high,” demonstrating a total lack of confidence in the Fed’s stewardship and Biden’s “anti-inflation plan.”

As for current Fed chair Jerome Powell, he faces the dilemma that if the Fed raises interest rates to counter inflation, the higher borrowing costs would likely trigger a chain reaction of corporate bond defaults; but if there is a return to Quantitative Easing (Federal Reserve money-printing by buying securities from major banks), as some regional Fed chairs are proposing, the result will be to accelerate the hyperinflation.

On the same day as Biden’s announcement of his “plan,” Russian President Putin gave an interview to Rossiya 1 TV, in which he identified Wall Street as responsible for inflation. Pointing to the process of the bailouts typified by the Fed takeover of the repo markets, Putin reported that the “money supply in the United States grew by $5.9 trillion in less than two years,” quipping that this demonstrated “unprecedented productivity of the money-printing machines.”