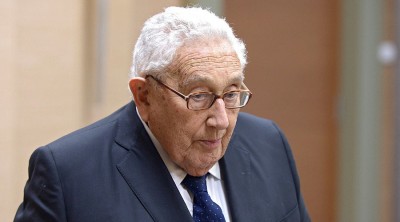 When Henry Kissinger surprised the world with his address at the recent World Economic Forum (WEF) in Davos (22-26 May 2022), by telling Ukraine’s President Zelenskyy, he had to make some concession in return for Peace, he was right.

The Master of “Realpolitik”, Nixon’s Chief Diplomat with the reputation of “opening up” China for the US and the rest of the world in the early 1970s, this very Henry Kissinger, Peace Nobel Prize winner – and let’s not forget, one of the world’s most notorious war criminals still alive – yes, this Henry Kissinger, surprised the world, but he had foresight. There is no Peace without Zelenskyy’s concessions. See this.

There is so much wrong with Ukraine, crime and corruption at all levels, plus MSM-unreported direct NATO interference, plus US funded war-degree (Grade 3) bio-labs throughout Ukraine, Russia would never give in. The war would become either a never-ending war of attrition (à la Afghanistan), or develop into a (nuclear?) WWIII scenario.

At this point, nobody is interested in a WW, let alone a nuclear WW. There would be no winners, as President Putin said many times. It would most probably become a Reset, far, very far, from Klaus Schwab’s dream.

So, yes, addressing the WEF’s keynote speaker, Volodymyr Zelenskyy, whom Klaus Schwab invited to give the Forum’s opening speech, Kissinger said in no mistaken words, that Ukraine has to make some concessions, in return for Peace. He didn’t specify. But looking at the Big Picture, it is pretty clear what type of concession Kissinger was thinking about.

By now, almost everybody knows that Ukraine has no trained military to handle the sophisticated weaponry coming from the US and from NATO countries. Most of these weapons may – or will rather – end up in the hands of criminal mafiosi gangs, so-called terrorist groups.

The billions of dollars of cash Ukraine gets from the west, let alone the 40 billion from the Biden Administration, can under no circumstances be absorbed by a country as bankrupt and corrupt as is Ukraine. The West knows that. Yet, they keep funding the Ukraine’s “fighting” against Russia. The flow of funds is kept alive, with intense lie-propaganda, that Ukraine will win the war against Russia.

All these billions are accumulating as debt, somewhere, especially in the US Treasury and the European Central Bank. But don’t forget, in the US and the EU, debt doesn’t count. Debt will never be paid back. The western monetary system is an enormous, debt-based pyramid system.

How ludicrous is the propaganda assertion that Ukraine will win the war against Russia!  If not stopped, it will become a hopeless and endless war – with tens or hundreds of thousands mostly Ukrainians killed.

Maybe the economic support and weapons money doesn’t even leave the US and NATO countries’ treasuries, but goes straight into selective bank accounts, including of the military industrial complex on both sides of the Atlantic.

Just a few days ago, Jens Stoltenberg, NATO Secretary General, said at the Kultaranta Talks in Finland, following a meeting with Finnish President Sauli Niinisto, that the US-led bloc [NATO] aims to strengthen Ukraine’s position at the negotiating table, but added that any peace deal would involve compromises, including on territory. See this.

Is it Kissinger’s Realpolitik observation at the WEF Davos Conference in May that prompted key “decision-makers” like Biden and Stoltenberg, to come to their senses and tell Zelenskyy that Peace has a price?

Or is it the other way around? The US / NATO military controllers, Biden and Stoltenberg, sent Kissinger as a messenger to tell Zelenskyy just that? In which case it looks like a plan that integrates fully into the Great Reset. A war that kills some tens of thousands of people, destroys vital infrastructure of a country, called Ukraine – however corrupt – in the end the people have to pay the price in lives and money.

Russia-Ukraine: A Light at the End of the Tunnel?

Maybe Ukraine can be rebuilt as a country of integrity, with a new non-corrupt leadership?

Independently of who does the bidding, Kissinger or the Biden / Stoltenberg hawks, Russia will be able to control not only the Russian speaking and inhabited Donbas area, but also cut Ukraine virtually off sea and waterways access, as Russia controls the Port of Mariupol, the Sea of Azov, the Kerch Straight, linking Crimea with mainland Russia via a newly built bridge. (See Michel Chossudovsky, Black Sea Geopolitics and Russia’s Control of Strategic Waterways: The Kerch Strait and the Sea of Azov) 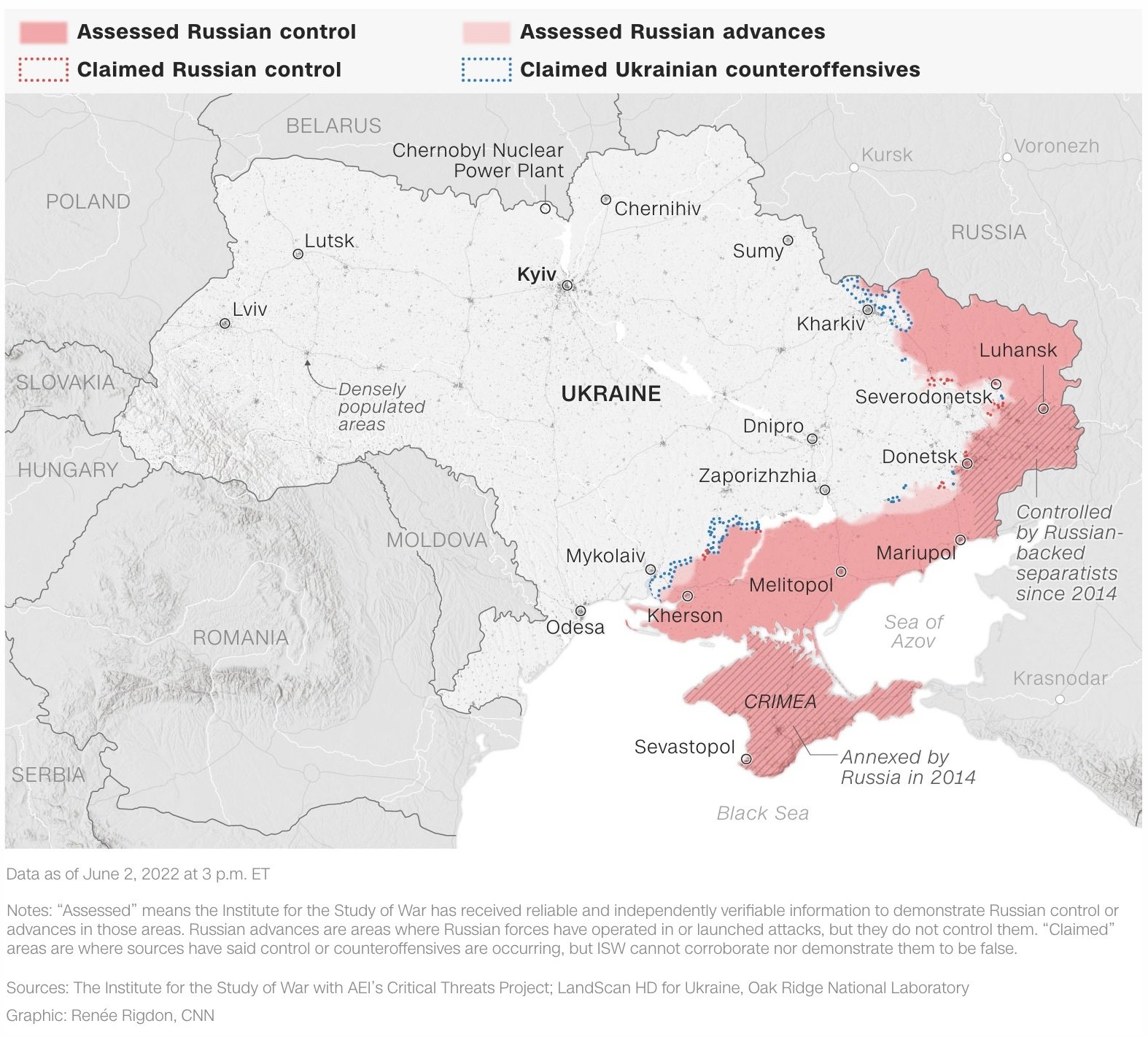 Russia may also have much influence over the control of the Dnieper River – a huge navigable water way – that runs from Belarus through Ukraine to the port of Kherson, Ukraine, at the Black Sea. 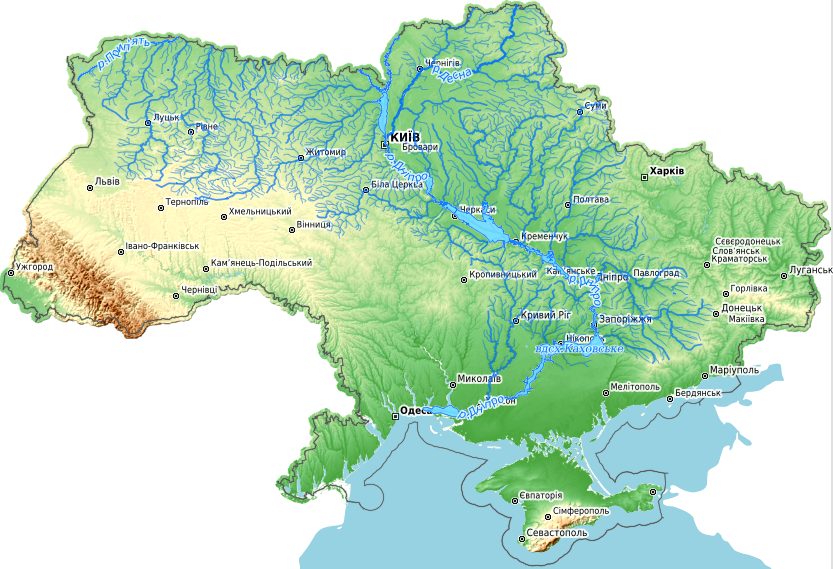 The Black Sea is virtually controlled by Russia, as Odessa, Ukraine’s largest port, for the time being is practically non-operable, because it has been mined by Ukraine’s own forces, preventing Ukraine from exporting up to 75 million tons of grains this year.

Russia has already said, they would demine the Black Sea to assist Ukraine shipping her grain to the Middle East and Europe.

Maybe that’s not what the West wants, because the plan is to bring about a tremendous famine to North Africa the Middle East and Europe.

Sadly, this is part of the Great Reset’s and the UN Agenda 2030’s agenda of depopulation and mental submission to the emerging One World Order (OWO). Many people may die. The survivors will suffer various degrees of famine, famine-related diseases and will be weakened, not only physically, but also in mind and spirit. They won’t have the energy to resist, thus become vulnerable for manipulations by the Dark Cult, or the Deep State, whatever term suits you best. 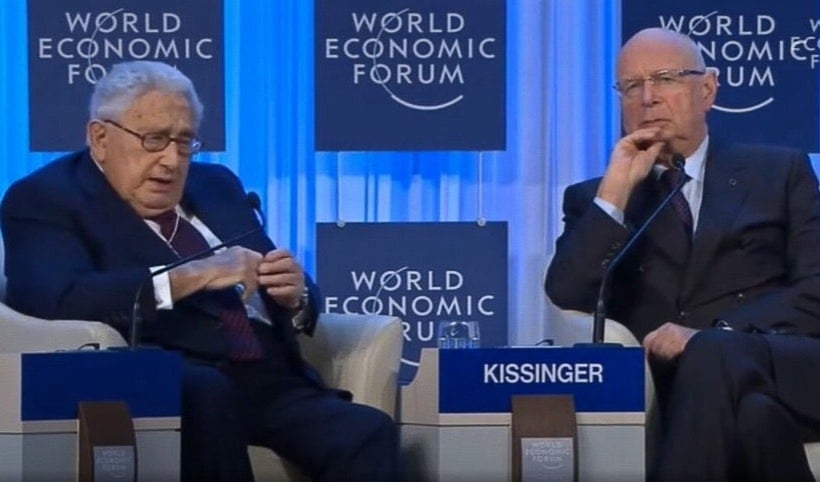 If Kissinger was indeed only a messenger, it would confirm that the Ukraine war – the NATO provocation of crossing Russia’s Red Line – was but an instrument to:

(i) allow Russia to save the population of the Donbass Region from Kiev’s and the Nazi-Azov Battalions’ atrocities. Since the US-instigated Maidan Coup in February 2014, more than 14,000 civilians, the majority women and children, were killed by Ukrainian (Kiev) forces and the infamous Nazi-Azov Battalions; and

(ii) to draw the world’s attention on the US – Russia proxy-war, so that the seamless continuation of UN Agenda 2030, alias the Great Reset, could be planned and implemented undisturbed behind the noise of bombs and canons.

An important element of this plan is to convert the World Health Organization (WHO) into an all-overarching, tyrannical world health-dictator, abolishing individual nations’ health sovereignty, by pushing through the infamous “Pandemic Treaty”. The first attempt, the first vote at the World Health Assembly (WHA) a couple of weeks ago, failed thanks to a block of 47 African countries, voting vehemently against it.

Incidentally, the WHA conference took place in Geneva, in parallel with the WEF. Strangely, Switzerland is hosting both, the WEF and the WHO. No questions asked about their criminal, world-destructive plans.

While no war is ever justified, ever – it maybe important to illustrate what may have led to this armed conflict in Ukraine. From the very beginning, and after the US instigated Maidan Coup in February 2014, Kiev did not adhere to the Ukraine France Germany Russia Belarus February 2015 Minsk 2 Agreement which, inter-alia, guaranteed autonomy within Ukraine to the Donbas Provinces of Donetsk and Luhansk.