“Why the current tightening cycle is unlike anything we’ve observed in the past.”

When Canada’s Consumer Price Index for May was released a couple of days ago, it was – “as expected,” I would say – a lot lot worse than expected, and exceeded once again by a huge margin the inflation forecasts by the Bank of Canada. According to the exasperated economists at the National Bank of Canada, CPI inflation runs 1.5 percentage points above the BoC forecasts of CPI, outrunning those forecasts at every step along the way. May was “the biggest miss yet in what has been a systematic underestimation of inflation,” they wrote in a note.

“So if May’s CPI report doesn’t set alarm bells ringing at Governing Council [of the Bank of Canada], someone should check their collective pulse,” they noted.

The headline CPI for Canada spiked by 7.7% in May compared to a year ago, the worst inflation rate since 1983, according to Statistics Canada: 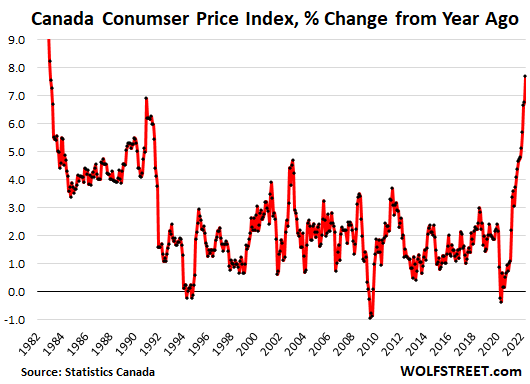 The BoC has already hiked its policy rates by 125 basis points, to 1.50%. At its last meeting, it included hawkish language of more and bigger hikes than expected, such as a 75- basis point hike at the July meeting. The BoC has also embarked on QT, and its balance sheet has been shrinking since March 2021. But the rate hikes and the hawkish language of future rate hikes were based on the BoC’s inflation forecasts which have been “a systematic underestimation of inflation.” So this rate-hike cycle is going to get interesting.

The month-to-month CPI rates of March, April, and May, annualized, spiked to an annual rate of 12.5%.

The red-hot month-to-month increases came across the board, and not just in a few commodities-linked items. It gave the BoC more than enough reasons to pull the trigger on a 75-basis point hike at its meeting on July 13.

“Inflation forecasts aren’t worth the paper they’re written on.”

The BoC’s inflation forecasts that it released at each of its prior meetings going back to April 2021 are depicted in different colors in the chart below from National Bank of Canada’s Financial Markets shop. The red line is the actual CPI rate for each quarter. The BoC’s estimates start at each meeting with the then current CPI rate.

So at its April 2021 meeting (light blue, first line from the bottom), as inflation had begun to surge, the BoC estimated that CPI would peak at just under 3% by mid-2021 and then decline to 2% by March 2022, hahahaha.

The above chart shows how ridiculously far off these inflation forecasts where, and how this inflation is a big wild card that just keeps getting worse, even as commodities prices have started to come down.

“For BoC watchers trying to compare today’s inflation trajectory with earlier monetary tightening episodes, give up. There’s simply no comparison in the overnight rate target era (that started in the mid-1990s). That’s why the current tightening cycle is unlike anything we’ve observed in the past,” said National Bank of Canada’s Warren Lovely and Taylor Schleich in their note.

“As aggressive as the past couple of BoC actions may have seemed at the time, it’s time to turn the screws even tighter,” they said.

“A 75 bp rate hike on July 13th won’t fix Canada’s inflation problem, not with labour markets as tight as they are. As an aside, job vacancy data are clearly worrying, and Canada’s acute labour shortage won’t be remedied quickly despite a resumption of healthy population growth [through immigration],” they wrote.

And they added – sprinkled with stark inflation humor:

“To summarize: We have out-of-control inflation. Simply sending more money to households like some governments have done (or intend to do) is just like adding gasoline (itself already expensive) to the fire.

“Indeed, with inflation data like this, securing a ‘soft landing’ might be like threading the eye of a needle. We haven’t totally abandoned hope, but today’s CPI report should sober up even the most enthusiastic among us.”

The Fed was also ridiculously off with its inflation forecast every step along the way and by now has gotten burned at the stake for its use of “temporary” and transitory.” The ECB too has been ridiculously far off with its inflation forecasts. And their monetary policies – their refusal to hike rates starting in early 2021, and their refusal to end QE and start QT at the same time – were driven by this ridiculous underestimation of inflation. But now they’ve gotten the memo.