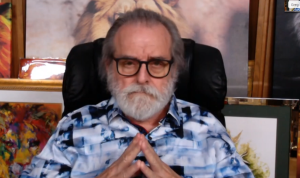 Renowned radio host, filmmaker and book author Steve Quayle says the world is being lied to about our ancient history.  Why?  The governments of the world want to control the narrative about who made us and the truth in the Bible about End of Days predicted in Revelation.  For many months, Quayle has had an excavation crew digging up ancient artifacts in Mexico that are thousands of years old.  They look like aliens found in the movies, and some artifacts have Egyptian hieroglyphs.  These new recently dug up artifacts from Quayle prove the history you were taught is a distortion and a lie.  Quayle says, “We are talking about the greatest coverup and cover over of ancient history. . . . There are different groups of aliens, but at the end of the day, they are evil spirits.  They are absolutely working against the plan and purpose of God.  Why? To deceive the world that God did not create the world–the anti-Christ did.  If you control all the artifacts in ancient history, you control the narrative.  You can put whatever meaning you want on those artifacts, that you want to build the ultimate deception.  That is so deceiving that most of the world will fall for it.”

The aliens, according to Quayle, are nothing more than the fallen angels of the Bible that mated with the daughters of man just as it says in scripture.  Quayle says, “The artifacts will show . . . . the symbols from different periods of time and different places in the world have the same meaning, and what they will show is the specific and general interplay of their plan to genetically corrupt the human race.  How does somebody have the double helix 6,000 years ago?  There are three of our relics that we found with that, and there are more.  How come some of them glow in the dark when hit with a UV light?  We have reptile and serpent artifacts. . . . What is the whole purpose on all of this?  It is to absolutely divorce human beings from the God of Heaven, who created man in his image and likeness, who Satan has been trying to pervert both before the flood and after the flood and now before the second coming of Jesus.  They want to do away with the human genome, and, hey, that messenger RNA (in the CV19 Vaccines), hello!! . . . . There is now upon us a period unlike any in history, and it only gets worse from here. . . . They are going to tell us that the aliens are here to save us, and that’s a big lie.  They are going to tell us that the aliens made us and not the God of heaven, and that’s a big lie too.”

There is much more in the 1-hour and 9-minute interview.