The Biden administration has been quietly mediating among Saudi Arabia, Israel and Egypt on negotiations for Straits of Tiran that, if successful, will be the next step on the road to the normalization of relations between Saudi Arabia and Israel, and the Two State Solution.

We told you from the start of the Abraham Accords, that that would end in the Daniel 9:27 and Isaiah 28:14,15 covenant that the Jews will make with the Muslims, and that Antichrist will confirm after the catching away of the Church in the Rapture. Today comes the stunning news that the Biden administration is quietly, some would say secretly, negotiating with Saudi Arabia to give the control of the Straits of Tiran. That’s the first thing they want in order to normalize relations with Israel via the Abraham Accords. What’s the second thing they want? The Two State Solution.

“For, behold, in those days, and in that time, when I shall bring again the captivity of Judah and Jerusalem, I will also gather all nations, and will bring them down into the valley of Jehoshaphat, and will plead with them there for my people and for my heritage Israel, whom they have scattered among the nations, and parted my land.” Joel 3:1,2 (KJB)

Your King James Bible tells you clearly, plainly and repeatedly that Israel will be divided and given to the Palestinians, also known as the Canaanites, this is what we here in the 21st century refer to as the Two State Solution. I can guarantee you, on the authority of scripture, that not only will this happen according to the prophets, it is happening right now. You can thank Donald Trump and the Abraham Accords for that, this is the end times covenant that has already ensnared the Jews.

Palestinian Authority President Mahmoud Abbas Now Claims That They Are The Biblical Canaanites, Zechariah Tells Them What Their Fate Shall Be

FROM AXIOS: According to the sources, the Biden administration believes finalizing an arrangement could build trust between the parties and create an opening to warm relations between Israel and Saudi Arabia, which do not have official diplomatic relations. 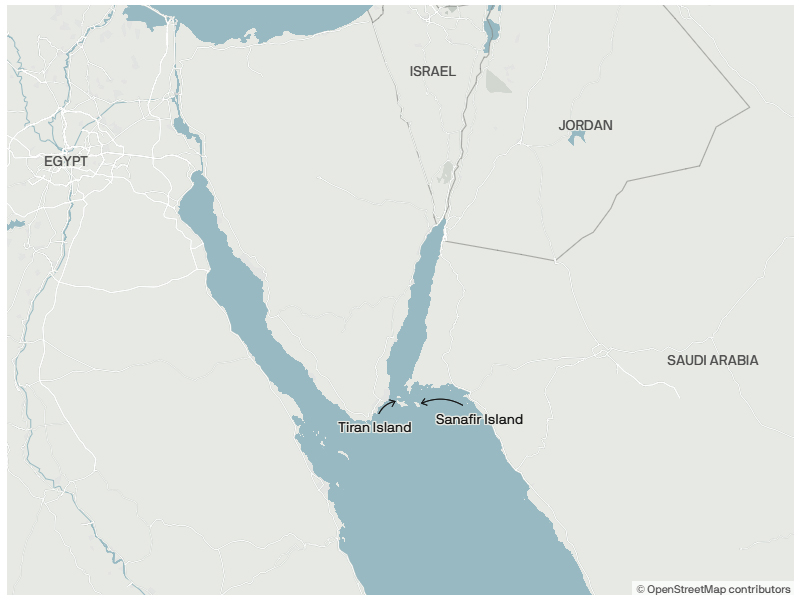 Transferring control of the Straits of Tiran to Saudi Arabia will be the biggest Middle East development since the Abraham Accords, all part of normalizing relations with Israel.

The Tiran and Sanafir islands control the Straits of Tiran — a strategic sea passage to the ports of Aqaba in Jordan and Eilat in Israel. Saudi and Egyptian officials say Saudi Arabia gave Egypt control of the islands in 1950. They were later demilitarized as part of the 1979 Israeli-Egyptian peace treaty.

It would be the most significant U.S. foreign policy achievement in the Middle East since the Abraham Accords, which were brokered by the Trump administration and led to normalization agreements between Israel, the United Arab Emirates, Bahrain and Morocco. Saudi Arabia supported the Abraham Accords but made it clear at the time they wouldn’t normalize relations with Israel unless there was serious progress in the Israeli-Palestinian peace process. READ MORE

When you contribute to this fundraising effort, you are helping us to do what the Lord called us to do. The money you send in goes primarily to the overall daily operations of this site. When people ask for Bibles, we send them out at no charge. When people write in and say how much they would like gospel tracts but cannot afford them, we send them a box at no cost to them for either the tracts or the shipping, no matter where they are in the world. Even all the way to South Africa. We even restarted our weekly radio Bible study on Sunday nights again, thanks to your generous donations. All this is possible because YOU pray for us, YOU support us, and YOU give so we can continue growing.

CLICK IMAGE TO ORDER YOUR BOX OF NTEB GOSPEL TRACTS

But whatever you do, don’t do nothing. Time is short and we need your help right now. If every one of the 15,860+ people on our daily mailing list gave $4.50, we would reach our goal immediately. If every one of our 150,000+ followers on Facebook gave $1.00 each, we would reach 300% of our goal. The same goes for our 15,900 followers on Twitter. But sadly, many will not give, so we need the ones who can and who will give to be generous. As generous as possible.