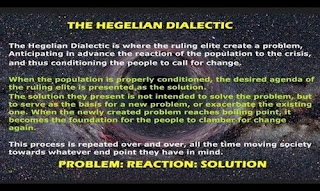 The twitter hashtag #BillGatesBioTerrorist was trending for a good part of the day Saturday after people in America and around the world put 2 + 2 together and realized Gates recently warned of a ‘pox‘ outbreak being the next big deal to come at the world, right before Monkeypox broke out in the West.

And as numerous people pointed out in that twitter thread, we’re now witnessing a perfect example of the Hegelian Dialectic at play in 2022, with the life-hating globalists once again launching a contagion upon the world which the dumbed down masses will ‘demand‘ a ‘solution to‘, that ‘solution‘ already pre-planned well in advance, though it certainly won’t ‘solve the problem‘.

With the Bulletin of Atomic Scientists putting out a story back on February 21st of 2020 titled “A biotech firm made a smallpox-like virus on purpose. Nobody seems to care” within which they reported that the smallpox-causing variola virus had been eradicated from nature with the only known samples of it have been held in two high-security facilities in the United States and Russia, as it also warned, developments in synthetic biology, a field which includes the art and science of constructing viral genomes, have made it possible to create the smallpox virus in a lab.

Reporting also within that story that evidence indicated back in 2020 that researchers are inching incredibly close to that line, their story also warned “the re-introduction of the disease—through negligence or malice—would be a global health disaster” with Smallpox responsible for the deaths of 300 million+ in the 20th Century.

With Monkeypox another such ‘pox virus‘, and very strong evidence emerging that this latest ‘outbreak‘ that is spreading quickly into the Western world was ‘manufactured‘, we’ll be taking a long look at that possibility in the next section of this story below but first, let’s listen to what the ‘scientific experts‘ who’ve been studying Monkeypox have to say and as you’ll see, something very strange is going on.

From this story over at Time titled “Monkeypox Spreads in West, Baffling African Scientists.”:

Scientists who have monitored numerous outbreaks of monkeypox in Africa say they are baffled by the disease’s recent spread in Europe and North America.

Cases of the smallpox-related disease have previously been seen only among people with links to central and West Africa. But in the past week, Britain, Spain, Portugal, Italy, U.S., Sweden and Canada all reported infections, mostly in young men who hadn’t previously traveled to Africa.

France, Germany, Belgium and Australia confirmed their first cases of monkeypox on Friday.

“I’m stunned by this. Every day I wake up and there are more countries infected,” said Oyewale Tomori, a virologist who formerly headed the Nigerian Academy of Science and who sits on several World Health Organization advisory boards.

“This is not the kind of spread we’ve seen in West Africa, so there may be something new happening in the West,” he said.

So as we’ll explore in the next section of this story below, with Bill Gates asking for money back in November of 2021 while warning of a future ‘pox terror attack‘ that he claimed could be much bigger than naturally occurring epidemics showing what twitter users claimed was some kind of ‘pre-knowledge‘, part of the reason why #BillGatesBioTerrorist was trending, we get huge new information from multiple sources that the US ‘deep state‘ has been working on just such a terrorist weapon in their once-secret Ukraine bioweapons laboratories. Is anyone surprised?