“The macroeconomic environment has deteriorated further and faster than anticipated.” Kathoomph. And Zoom gives up most of its knee-jerk mini-jump afterhours.

Shares of Snap fell through a trapdoor in afterhours trading today, WHOOSH, gone, after the company said in a filing with the SEC that “the macroeconomic environment has deteriorated further and faster than anticipated,” and that it therefore expects to “report revenue and adjusted EBITDA below the low end of our Q2 2022 guidance range,” without giving specifics.

It had issued this guidance just a month ago, on April 21. And now it walked it back. That didn’t last long. 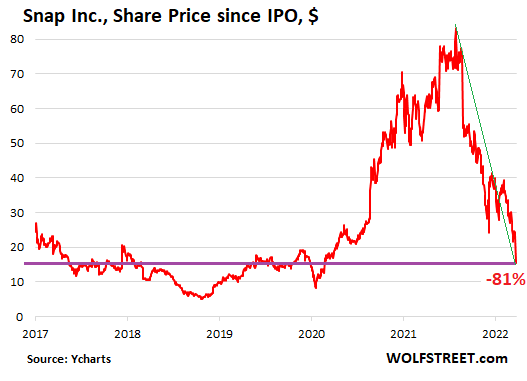 Back on February 2, Meta blew up the social media stocks, including Snap, when it said that Apple’s new privacy policy was hurting Meta’s spying business. Snap shares plunged 23%.

The next day, Snap counter-punches with its Q4 earnings and said everything is hunky-dory, and it hadn’t been hurt by Apple’s new privacy policies, and it reported its first-ever net profit, and it raised its guidance for revenues and active users.

In response, the stock [SNAP], which had been brutalized, knee-jerk-spiked as much as 62%! Dip buyers, if they dumped those shares right then and there, had a field day. Markets ate it up because Meta’s warning had just been a head-fake, and the good times were back. True believers that thought this was just another step toward infinity got re-crushed in what came next.

On April 21, Snap reported its Q1 earnings, namely a net loss that was 25% bigger than a year earlier, in what CEO Evan Spiegel infamously called a “challenging operating environment.” Some of the other metrics also missed analysts’ expectations.

It expected Q2 revenue to rise between 20% and 25%, below analysts’ estimate of 28%. But it forecasts daily users of about 344 million, above expectations of 341 million. And it said its profit measure of “adjusted EBITDA” would fall between breakeven and $50 million.

That was the guidance that Snap walked back today, with such spectacular effect.

During regular trading today, Snap shares had already dropped 3.4%, amid a huge rally for the rest of the world, which makes you wonder who knew what and when about this propitious announcement.

Snap thereby joined an ever-larger group of companies that have cut their earnings, often citing a laundry list of reasons, including surging costs of labor, materials, components, and transportation, shortages of all kinds, and waning consumer or corporate interest in their products. And so my column of Imploded Stocks gets more supply.

Even the shares of Zoom Video [ZM] gave up much of their knee-jerk 20% spike afterhours, and are now up just 4.8%, to $93.65, after the company reported that its net income plunged by only 50%, which was less bad than expected, and that its revenues rose 12%. And it raised its guidance for the full year.

That’s one of the few companies of that ilk that are profitable, even if less profitable than before, and that are now having to deal with the reality of investors no longer blindly buying all the hype and hoopla, but seeing revenue growth of 12% when inflation is 8%, and they’re seeing a P/E ratio that is still 20, and they’re suddenly seeing the uncertainties that were there all along, and they’re seeing that everyone and their dog among big tech has had a competing video conferencing services for years and decades, and it’s hard to get blindly excited.

Zoom’s 4.7% gain afterhours isn’t even visible on the chart. The shares are down 79% from their intraday high on February 16, 2021, yes, that infamous February when a bunch of these stocks now enshrined in my Imploded Stocks started coming apart. But at least, it’s still above its IPO price of $36 (data via YCharts):