The total amount of leverage in the stock market is unknown and takes many forms. The only form that is tracked and reported on a monthly basis is margin debt. The other forms, such as Securities Based Lending (SBL) and hedge funds leveraged at the institutional level are not tracked. Not even banks and brokers that fund this leverage know how much total leverage their client has from all brokers combined, which became clear when the family office Archegos imploded in March 2021 and wiped out billions of dollars in capital at the prime brokers that had provided the leverage.

But margin debt – the tip of the iceberg and indicator of the direction of the overall stock market leverage – dropped by $27 billion in April from March, to $773 billion, according to Finra, which gets this data from its member brokers. Margin debt peaked in October last year at $936 billion and started falling in November. Over those six months, it has dropped by $163 billion, or by 17%. But leverage is still massive, and the unwind has a long way to go: 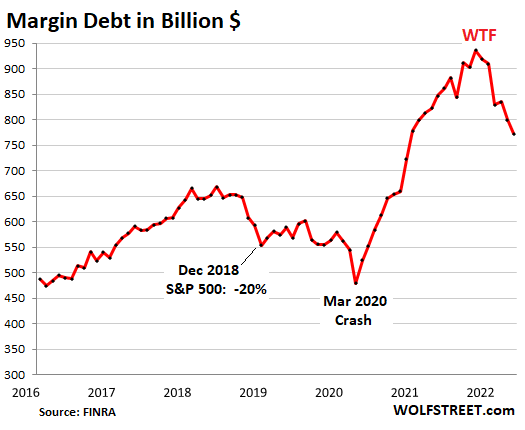 Not included in the margin debt data today is May. So far in May, the S&P 500, despite today’s rally, has dropped 6.2%, and the Nasdaq 8.3%, and many of the imploded stocks have gotten brutally crushed over those two weeks, including Coinbase, whose huge gigantic rally since Thursday morning didn’t amount to flyspeck compared to the devastating plunge in the prior two weeks and since its IPO and is barely visible on the stairway to heck since the IPO.

These kinds of selloffs trigger big bouts of forced selling amid margined stock jockeys that have concentrated on these stocks.

Hundreds of stocks have plunged by very large amounts, by 70%, and 80%, and even over 90% in a replay of the beginnings of the Dotcom Bust, only bigger and broader, and it’s going stock by stock, and it started in February last year, and seriously got going in November, and some of those I’ve captured in my special column Imploded Stocks.

Here is a sampling of well-known names amid the brutal bloodletting. The percentages are from their highs through the close on May 13:

Leveraged investors in those instruments had to reduce their margin as their collateral values vanished into the ether, something overnight, turning these investors into forced sellers to raise the cash needed to pay down their margin debt.

A margined investor that was heavily concentrated in these stocks and didn’t dump them in time could get wiped out and might be thinking about rejoining the labor force to help solve the labor shortages.

When lots of investors take on leverage to buy stocks, and leverage rises, it creates buying pressure with borrowed money, fueling heat in the market.

But when investors come under pressure because of their leverage and vanishing collateral values, they sell stocks, and it creates selling pressure.

The trick is to not get sidetracked by the absolute dollar amounts over the decades. They don’t really matter. What matters are the steep increases in margin debt before the selloffs, and the steep declines during the sell-offs. The chart shows the relationship between margin debt and “events” in the S&P 500 index.