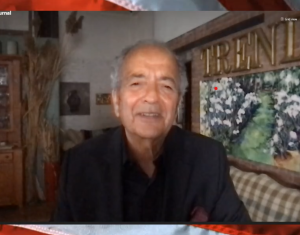 Renowned trends researcher and publisher of “The Trends Journal,” Gerald Celente, boldly stated in March “World War III has Begun.”  Don’t expect that trend to change anytime soon.  Celente explains, “Hey, I’m the President of the United States, and I am going to send weapons of death to kill more people.  Am I an accessory to the crime?  Yes.  It’s not a proxy war with the United States and Russia, it’s at war. . . . We have maniacs in charge, and Biden just said we will defend Taiwan. . . . World War III began with the Ukraine war and the United States and NATO giving others what they need to go kill.  Now, they are heating it up with China.  Anybody with a brain bigger than a pea would say if we go to war with China and Russia, it’s the end of the world.  There will be nuclear destruction.  That’s anybody with a mind bigger than a pea.  The people in charge, they are lunatics, and they are not men. They have cajones smaller than a pea.  These are the people leading us to death.  These are insane people.  They are mentally ill, and they cover it with a good act playing a politician.”

Celente sees a big trend for Russia this year.  Celente predicts, “Russia is going to become one of our top trends for 2022.  It will have a self-sufficient economy. . . . Go back to Davos, and they want to control all.  Russia, because of what the United States, along with 30 other nations, have done to them with sanctions, is going to become a self-sustaining economy.  They are pulling out of globalization. . . . They have all the natural resources they need.  What’s happening to Russia, and what the world is forcing on them, is going to be a gem for Russia. . . . It’s going to be a fight about over what they can’t get against those who have it.”

The trend on inflation is not good, and Celente says it’s mostly happening because of the current leadership in the Biden/Obama Administration.  Celente says, “The whole society is collapsing in front of us.  We have freaks and fools ruining our lives. . . .  It’s not going to be stag-flation, it’s going to be drag-flation.  We are dragging down as inflation skyrockets.  We have maniacs in charge.  These are people that could not get a real job that are running or ruining our lives. . . . We are going to see a global disaster the likes of which we have never seen before.”

On gold and silver, Celente says, “Gold and silver, right now, the prices are soft.  They are going to go down again when interest rates go up because the dollar gets stronger. . . . When will gold and silver go up?  Now hear this, when the equity markets crash because that’s when the common person knows how bad it is, and that’s when they start freaking out. . . . When Wall Street crashes, the common people that look up to these clowns will know how bad it is, and that’s when you are going to see precious metals spike.”

In closing, Celente says, “Absolutely, America will be hit by nukes in the upcoming war with Russia. . . . We need peace, and there is no peace movement in America.  If we don’t stop it, it’s going to be hell on earth. . . . United we stand, divided we die.”