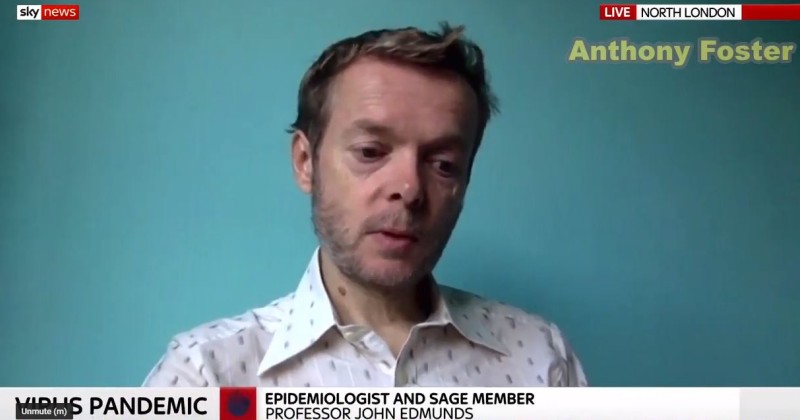 Another technocrat flees the sinking narrative.

A professor who advocated for longer lockdowns in his role as a SAGE government advisor now admits that the negative impacts of lockdowns were never included in SAGE modeling and that they should have been.

Professor John Edmunds was part of the SAGE team that told the government there would be 6,000 Omicron deaths per day in the absence of another lockdown late last year.

In reality, the death toll never got anywhere near that number as the doomsayers were proven spectacularly wrong yet again.

Now Edmunds admits that the economic harm and the knock-on health effects of lockdown were harms that “in principle” could have been factored into models “but in practice they were not.”

The professor called for an extended lockdown in Summer 2021 and said the government was “taking a risk” by lifting restrictions, but now says some of the alarmist death projections put out by SAGE were “truly eye-watering.”

“The epidemiological model is only one component [of decision-making] and I wondered and I worried that we’d had too much weight,” said Edmunds.

“There is of course an enormous economic impact from many of the interventions and other indirect impacts on psychological health and so on. Now these in principle could be included but in practice they were not,” he added.

“Joy shall be in heaven over one sinner that repenteth and all that – but you can’t help feel the recantation is very convenient as we move on from the pandemic and people start to look back with more objectivity at all the crazy, costly things that were done in the name of ‘science’ and at the behest of modellers,” writes Will Jones.

Edmunds is another individual who, having once vehemently advocated for stricter and longer lockdowns, is now having to concede that they were a mistake and is fleeing the sinking ship that is the entire lockdown narrative.

As we recently highlighted, figures from the World Health Organization show that Sweden had fewer COVID deaths per capita than much of Europe despite refusing to enforce strict lockdowns and mask mandates like numerous other nearby countries.

A study published in the Royal Society Open Science journal last month found that lockdowns in the UK caused around 60,000 children to suffer clinical depression.

A major study by Johns Hopkins University earlier this year concluded that global lockdowns have had a much more detrimental impact on society than they have produced any benefit, with researchers urging that they “are ill-founded and should be rejected as a pandemic policy instrument.”