The Japanese people are not amused.

OK, so here we go. The overall consumer price index for all items in Japan jumped by 0.4% in April from March, the third month in a row of 0.4% increases (4.8% annualized), and by 2.5% from a year ago, up from an increase of 1.2% in the prior month, Japan’s Statistics Bureau reported today. 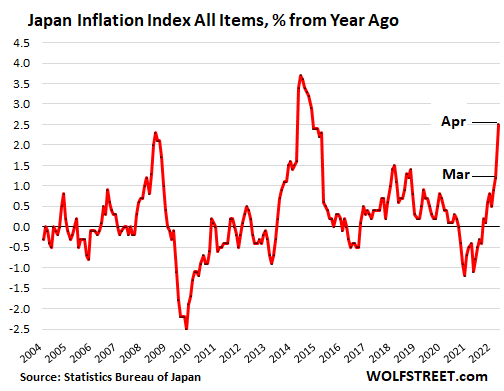 The Japanese people are not amused.

Prices for household durable goods, such as furnishings and appliances, jumped by 5%.

The now ended price wars amid wireless carriers still held down the overall inflation rate: The index for “communications” dropped by 10.9% year-over-year, but those price wars had peaked last year, with the steepest month-to-month drop in April 2021 (-24% from March). The year-over-year decline peaked by over 34% in December. Recent month-to-month changes indicate that rates have flattened. And going forward, this category’s downward pressure on the overall price index will dissipate, and the other price increases can carry the day.

Wholesale inflation blows out. On Monday, Japan’s wholesale price index for April was released, and it spiked by 10%, the worst jump in at least 40 years, as inflationary pressures are building up in the pipeline.

Inflation subsidies, of course. The government has passed a series of inflation relief packages, including one-time cash handouts of ¥50,000 ($391) per child to low-income families to help them pay for the higher prices.

Subsidizing wholesalers is an ingenious move because it pushes down the retail price of gasoline, and thereby the inflation index, which then makes the overall consumer price index seem less bad. These subsidies to wholesalers have been in effect since early this year, and the inflation index would look worse without them.

Healthcare “inflation” largely decided by the government: pushing down on it. Health insurance and healthcare in the US are huge budget items for Americans, and inflation has been rampant. That’s not the case in Japan, which has a government health insurance system for universal coverage, funded by taxes and individual contributions. Enrollment is required, either employment-based or residence-based. The amounts that the Japanese pay directly for healthcare (co-pays, etc.) are small, compared to what Americans pay. And a lot of the consumer-facing costs are determined by the government.

The Bank of Japan: It’s just transitory, throws yen under the bus.

So, true to form, the BoJ has been blowing off the inflationary pressures, and has been saying, in the best Powell imitation, that those pressures are just “transitory.”

“There is no need to tighten monetary policy in response to a transitory trend, as opposed to a sustained one,” BoJ’s head Haruhiko Kuroda told a nervous Parliament in April.

The yen has plunged all year (except for a bounce the past few days), which is where part of those inflationary pressures come from, as the plunging exchange rate of the yen against the dollar makes imported commodities and raw materials, including food and energy commodities, a lot more expensive.

The yen has plunged against the dollar because the BoJ refuses to budge off its negative policy rate and Yield Curve Control, even as the Fed is now grappling with inflation, and US yields have shot higher. Given the recklessness of the BoJ, the yen has paid the price, and the BoJ as thereby contributed to importing inflation.

But to its credit and despite all its endless money-printer rhetoric, the BoJ effectively ended its aggressive government-bond buying program at the end of 2020, and its holdings of Japanese government securities peaked in February 2021.