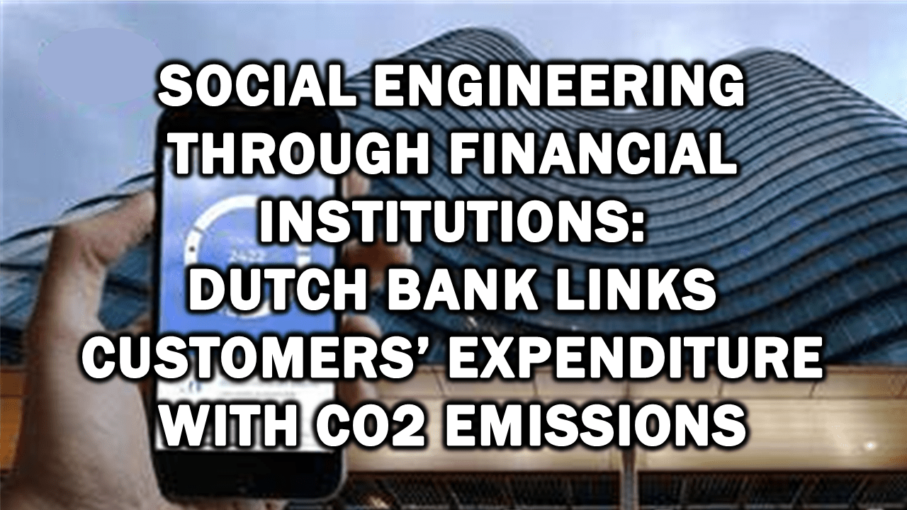 We’ve recently published articles about governments in Bologna, Vienna, Bavaria and Belgium making plans to implement social credit systems: those who consume less CO2 will be rewarded. In the Netherlands, starting on 22 April, the first Dutch bank, and possibly the first in Europe, is linking payment transactions with CO2 emissions.

Mastercard, in collaboration with a start-up, already has a credit card that monitors and automatically cuts off spending when purchases have reached their “carbon max” – an initiative praised by the World Economic Forum.

Now, the second-largest bank in the Netherlands, Rabobank, has begun to monitor CO2 emissions of every payment made. 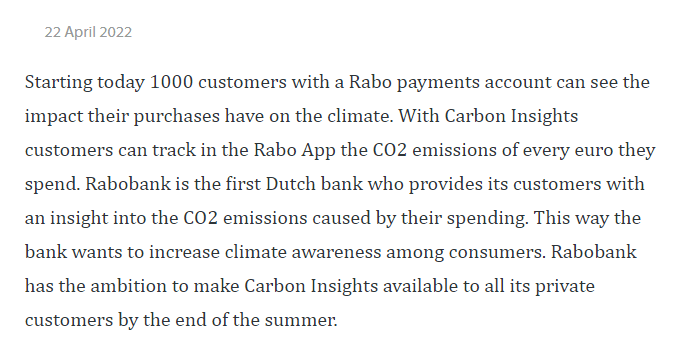 Rabobank customers gain insight into the CO2 emissions of their purchases, 22 April 2022.

Rabobank does not want to go as far as Mastercard. Its new tool is voluntary and is being sold as a service and not as a disciplinary procedure … for now.

The bank’s CEO, Barbara Baarsma, said: “The goal is absolutely not to point the finger as a bank and act as an advisor.”

To sell the idea to the public Baarsma wraps the innovation in fluffy language: “We want to give people insight into their own behaviour and if they want to, they can adapt their behaviour.”

Baarsma is considered an “expert” in the Netherlands: she advises the Ministry of Health through “expert commissions” and often makes guest appearances in the media.

The bank is also already issuing vouchers to farmers who are doing something about CO2 emissions.

“We’re making consumers part of the solution, just as we are doing with sustainable farmers who can earn carbon credits by storing carbon in their fields. Together, our eight million private customers can make a difference and fight climate change by changing their consumer behaviour towards a lower CO2 footprint. For example, by buying other, less carbon-intensive foods, they also encourage supermarkets to offer more sustainable products,” Baarsma said.

She also advocates that in future the CO2 emissions should be indicated on the products in the supermarkets. That’s what people want, they want “well-informed decisions and transparency.”

“This is a good first step for the bank,” said Laurens Sloot, a professor of retail entrepreneurship at the University of Groningen, “as a consumer, you don’t know exactly what damage the products you buy are doing, and you certainly don’t have to pay extra for it.”

What neither the bank nor “scientists” have considered is that Europeans’ disposable income is slowly being eroded and Europeans will factor in the price of goods, not the CO2 emissions, when making a purchase.