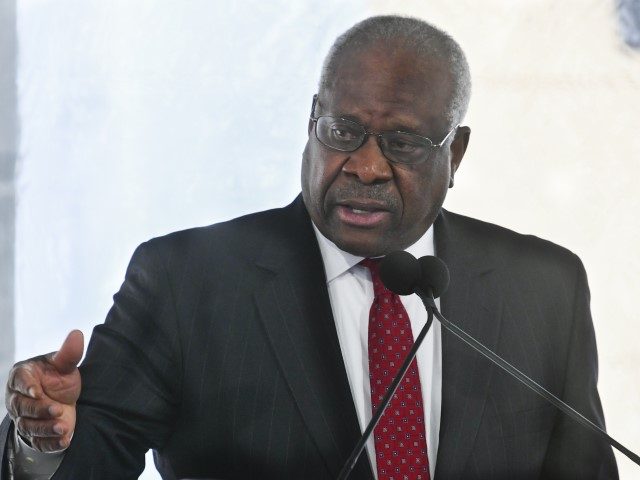 U.S. Supreme Court Justice Clarence Thomas spoke out about the leaked draft opinion on abortion Friday, saying such a breach brings into question how long our country’s institutions will last “at the rate we’re undermining them.”

Thomas, the longest-serving justice on the nation’s high court, was speaking at a conference for black conservatives in Dallas when he addressed the issue of the leak, saying “I do think that what happened at the court is tremendously bad.”

“I wonder how long we’re going to have these institutions at the rate we’re undermining them, and then I wonder when they’re gone or destabilized what we will have as a country. And I don’t think the prospects are good if we continue to lose them,” he continued.

The draft opinion, the authenticity of which was confirmed by Chief Justice John Roberts, was written by fellow Justice Samuel Alito. It was an explicit overturning of the infamous pro-abortion case Roe v. Wade as well as Planned Parenthood v. Casey — sending the issue of abortion back to state legislatures.

In confirming its authenticity, Roberts said that it was not necessarily the ruling that the Court will come down with, while at the same time directing the Marshal of the Court to open an investigation into the origin of the leak.

While many on the left lauded the leak as “brave,” those more concerned about the longevity of American institutions took a different view.

“When you lose that trust, especially in the institution that I’m in, it changes the institution fundamentally. You begin to look over your shoulder,” Thomas said. “It’s kind of like infidelity in that you can explain it, but you can’t undo it.”

“If someone said that one line of one opinion would be leaked by anyone, you would say that, ‘Oh, That’s impossible. No one would ever do that,’” the George H.W. Bush appointee, who has been sitting on the court since 1991, said. “That was verboten. It was beyond anyone’s understanding, or at least anyone’s imagination.”

Speaking about other justices with whom he has served, Thomas said the breach has changed the working climate of the Court.

“This is not the court of that era,” said Thomas, who was confirmed in 1991. “I sat with (famously liberal justice) Ruth Ginsburg for almost 30 years and she was actually an easy colleague to deal with. … We may have been a dysfunctional family, but we were a family.”

After the leak, leftist organizations doxxed the home addresses of conservative justices, leading to demonstrations outside their homes, high police presence, and at least one justice being taken to an undisclosed location for his personal safety.

Thomas, however, said that only leftists engage in such behavior.

“You would never visit Supreme Court justices’ houses when things didn’t go our way,” Thomas told the group of conservatives he was addressing. “We didn’t throw temper tantrums. … It is incumbent on us to always act appropriately and not to repay tit for tat.”