by MN Gordon, All News Pipeline: 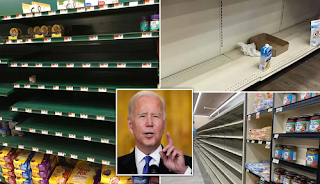 The latest iteration of the Russia-Ukraine war recently surpassed the 90 day marker. And there’s no foreseeable end in sight.

Henry Kissinger’s counsel at the World Economic Forum this week that Ukraine give up territory to Russia is a nonstarter for Volodymyr Zelenskyy. This war has only just beginning.

Do you remember what the fighting is for? If so, you’re one of few.

President Biden – the big guy – is entirely flummoxed. This week, at the Quad summit in Japan, Biden remarked that the Russian war against Ukraine was “unprovoked.” Once again, a firm grasp of the facts is not one of Biden’s strong suits.

Vladimir Putin, the invader, has over two decades of provocations he can point to. According to declassified U.S., Soviet, German, British, and French documents posted on December 12, 2017, by the National Security Archive at George Washington University, the U.S. promised to not expand the North Atlantic Treaty Organization (NATO):

“U.S. Secretary of State James Baker’s famous ‘not one inch eastward’ assurance about NATO expansion in his meeting with Soviet leader Mikhail Gorbachev on February 9, 1990, was part of a cascade of assurances about Soviet security given by Western leaders to Gorbachev and other Soviet officials throughout the process of German unification in 1990 and on into 1991.”

Yet, instead of maintaining the status quo, NATO has greatly expanded eastward towards Russia’s border. Russia considers the expansion of NATO to be a direct military threat. The Russian government also doesn’t like the U.S. conducting regular military exercises in countries bordering Russia for over 20 years.

Now, after 90 days of war, anything, including WWIII, can happen… 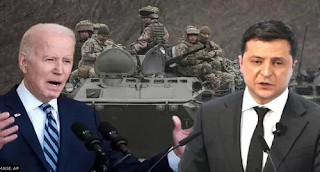 The U.S. is currently arming Ukraine with a dizzying display of weapons. American-made M777 Howitzers, FGM-148 Javelins, FIM-92 Stingers, and Switchblade Kamikaze Drones. These are good times to be an arms maker.

Without question, the technology of the military-industrial complex is remarkable. And its appetite for destruction is gluttonous. Too much ‘defense’ spending is never enough.

Yet the gross misallocation of capital for the purpose of destructive consumption will have consequences that remain for many decades. It will further enlarge America’s massive $30.5 trillion debt pile with no economic benefit in return. This guarantees a future that will be less prosperous for American workers who will have to pick up the tab.

What’s more, Biden, the commander in chief, is going all in. And why not? His public approval rating has fallen to 36 percent. The elderly fellow is seriously struggling. He needs a miracle.

“To put this giveaway to Ukraine in perspective: just since late February, the US has provided nearly $60 billion in ‘assistance’ to Ukraine. That is almost half that country’s entire 2020 GDP! Washington has literally adopted Ukraine in our name and on our dime.”

At the same time, and at a great cost, Putin is slowly succeeding. Invading Ukraine has proved much more difficult than annexing the Crimean Peninsula in 2014. Nonetheless, the recent taking of Mariupol has established a full Russia controlled land connection between the Peninsula and the pro-Russian areas in Donetsk and Luhansk.

Putin now has control over the entire Ukrainian coast of the Sea of Azov. And now controls much of the provinces of Kherson, Zaporizhia, Donetsk, Luhansk, and Kharkiv. The optimistic NATO narrative appears lacking.

Something terrible is setting in. A costly and protracted war in Ukraine. Certainly, the $40 billion aid could turn into several trillion – or more – over the next decade like it did in Afghanistan and Iraq.

Just 90 days in, and the implications are rapidly multiplying and ricocheting around the globe like metastatic cancer.