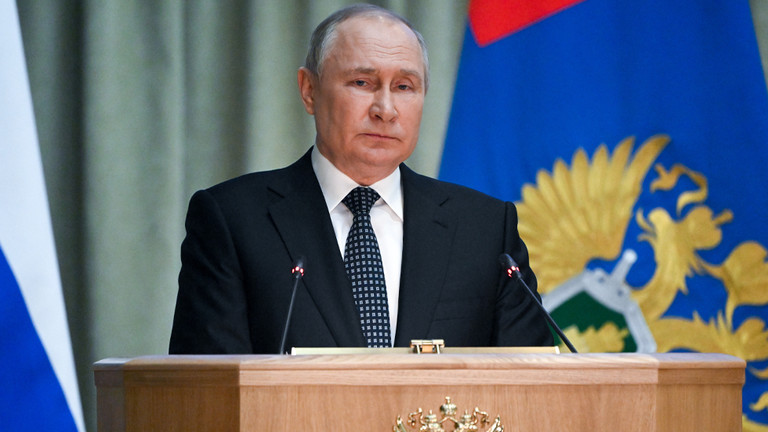 Failed attempts to “destroy Russia from within” forced Ukraine and its Western “handlers” to turn to terror measures, Russian President Vladimir Putin said on Monday.

Speaking at a meeting of the Prosecutor General’s Office Board, Putin outlined how, in his opinion, the priorities of Europe and the US in regard to Russia and its military operation in Ukraine had changed over the last few weeks.

First, he said, “high-ranking diplomats in Europe and the United States” were engaged in a “strange diplomacy,” urging their “Ukrainian satellites” to do everything possible “to win on the battlefield.”

Putin was apparently referring to a recent controversial statement by top EU diplomat Josep Borrell, who, following his visit to Kiev, said that “this war will be won on the battlefield.” During a conversation last week with European Council President Charles Michel, Putin pointed to the “irresponsible statements of the EU representatives about the need to resolve the situation in Ukraine by military means.”

In Putin’s opinion, the West has since changed its goal.

“… As they realise that this is impossible, they try to achieve a different objective instead – to split Russian society, to destroy Russia from within. But here, too, there is a hitch; this hasn’t worked either,” Putin said.

In his opinion, Russian society “has shown maturity, solidarity,” and supports its armed forces and the efforts “to ensure Russia’s ultimate security and help the people living of Donbass.”

After a ‘fiasco’ in the media field, Putin claimed, the West has turned “to terror, to arranging the murder of our journalists.”

He was referring to Monday’s announcement by Russia’s Federal Security Service (FSB) that it had detained a group of “neo-Nazis” instructed by the Ukrainian Security Service (SBU) to kill popular Russian TV host and journalist Vladimir Solovyov. Kiev has denied any role in organizing the assassination attempt.

“In this regard, it should be noted of course that we know the names of all the Western handlers, of all members of Western services, primarily the CIA, who are working with Ukrainian security agencies. Apparently, they are giving them such advice,” the Russian leader said.

“All they care about is their own rights, some cherishing imperial ambitions, others holding on to their colonial past in the old-fashioned way. But this will not work in Russia,” Putin claimed.

While the Kremlin has been accusing the West of attempting to divide Russian society, Western countries have been alleging that Moscow suppresses opposition, independent media, and even dissent in general. This kind of criticism has intensified following the launch of the offensive in Ukraine and subsequent measures taken by Moscow to crack down on “fake news” and so-called “foreign agents.”

Russia attacked the neighboring state in late February, following Ukraine’s failure to implement the terms of the Minsk agreements, first signed in 2014, and Moscow’s eventual recognition of the Donbass republics of Donetsk and Lugansk. The German and French brokered protocols were designed to give the breakaway regions special status within the Ukrainian state.

The Kremlin has since demanded that Ukraine officially declare itself a neutral country that will never join the US-led NATO military bloc. Kiev insists the Russian offensive was completely unprovoked and has denied claims it was planning to retake the two republics by force.