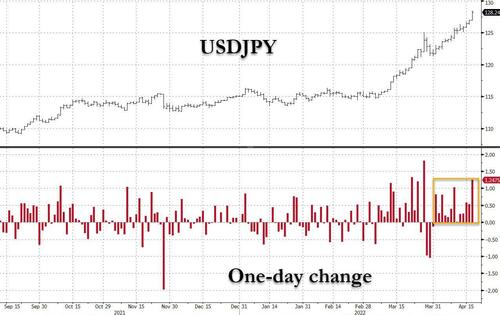 As we discussed earlier today in “Why you should pay attention to the crashing JPY“, with the Japanese currency imploding at a never before seen pace, sliding on 13 consecutive days – an uninterrupted streak never once seen in history – things are starting to get scary for the BOJ and adherents of the lunacy that is MMT.

And unfortunately for the BOJ, as Bloomberg’s resident FX experts Mark Cudmore writes, the yen has plenty more downside in 2022 as the BOJ is yet another central bank being lulled into misplaced complacency on inflation.

Below, Cudmore explains why it about to get much uglier for any remaining yen bulls out there.

Remember the 2021 idea that “inflation is transitory”?! That was laughable. And so is the idea that Japan won’t see above-target inflation in 2022. The problem is that too many people trust economists on this issue even though the only thing we know from the past year is that, in aggregate, economists, globally and also particularly in Japan, are very poor at forecasting inflation.

When we suggested in December that consumer price inflation in Japan was a 2022 black swan to watch for, the reaction was extremely dismissive. At the time, the consensus forecast for full-year inflation was 0.7%. It now has jumped to 1.5% and will keep being revised higher by economists chasing the trend rather than looking at the real world around them:

I’m told that Japanese companies struggle to raise prices in a country that hasn’t had inflation for so long. I get that. But reality will overtake them and force everyone to adapt, because the hard facts are that input prices are going parabolic in Japan, and to such an extent that it can’t be ignored any more.

The Bloomberg Commodity Spot Index rose 8.2% in JPY terms over just the past week. It’s up 29% since end of Feb., more than 48% ytd and 177% over the past two years (all in JPY terms). These are incredible moves:

With the BOJ sticking to its extraordinarily easy policy, the yen’s negative real yields will deepen. And the central bank is trapped because the country’s large sovereign debt pile means that higher rates create a new problem, where the stress outlet will again likely be the currency.

This post isn’t making any particular call on the short-term price action, but, as outlined last week, any yen rally in 2022 won’t be sustainable without a global growth shock.