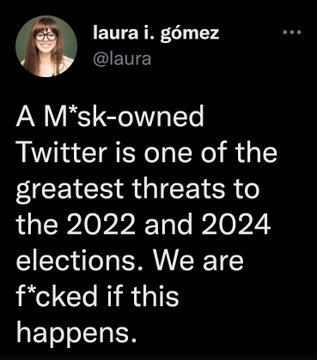 Twitter finally agreed to Elon Musk’s offer on a takeover bid deal for $44 billion on Monday.

Twitter was reportedly re-examining Elon Musk’s $43 billion takeover offer after the billionaire lined up financing for the bid over the weekend. They reached an agreement on Monday.

Twitter is well-known for stifling, censoring and banning free speech in America. Twitter silenced The Gateway Pundit, Joe Hoft, Tucker Carlson, Alex Jones and even the President of the United States. Only conservatives get banned. There should be laws against this.

Elon Musk previously said his interest in Twitter was not so much to make money as it was to restore free speech on the internet. He now has that opportunity.

Already there are calls to reinstate prominent conservative accounts banned by the social media giant.

I still fear that having Elon Musk take over Twitter is bad for democracy, as I argued, but I fervently hope he proves me wrong. He can do some good if he cleans out the bots and fine-tunes, rather than jettisons, the content moderation policies. https://t.co/NyDMBSu5TX

If he really thinks he can create that same toxic, high school bully, 80s South Africa world here and somehow monetize that, he should maybe stick to sending compensatory technology to “near space” for his fellow men with more money and time on their hands than interesting ideas.

Hi Twitterverse. Many thanks for the knowledge and sharing over the past ten years or so. If Musk takes over Twitter I will be off within a few hours. Might be just as well for my well being but I’ve learned a lot of valuable stuff from many of you.Thank you all. Howard