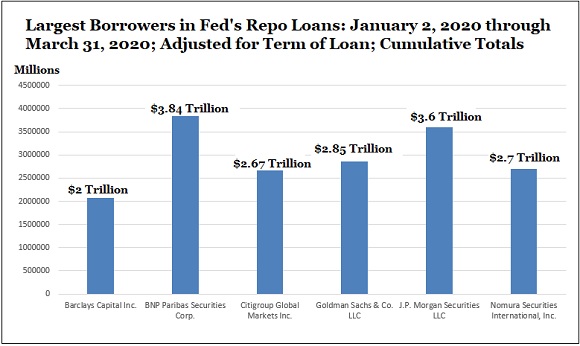 As thousands of businesses were forced to close in the U.S. as a result of the coronavirus outbreak in March of 2020, and millions of Americans were financially struggling, the Federal Reserve was pumping what would become a cumulative $3.84 trillion in secret repo loans into the U.S. trading unit of the giant French global bank, BNP Paribas, in the first quarter of 2020.

The repo loan market is where banks, brokerage firms, mutual funds and others make loans to each other against safe collateral, typically Treasury securities. Repo stands for “repurchase agreement.” The Fed only comes to the rescue of this market when there is a liquidity crisis and Wall Street firms are backing away from lending to each other. September 17, 2019 was the first time the Fed had to intervene in the repo market since the financial crisis of 2008 and it was months before the first case of COVID-19 was discovered anywhere in the world.

BNP Paribas is not just any ole global bank. It’s the bank that the U.S. Department of Justice fined $8.8 billion in 2015 for flouting U.S. sanctions, covering its tracks, and pleading guilty to a criminal charge.

What may have led to the scramble for money by BNP Paribas Securities is – wait for it – risky derivatives, the same financial weapons of mass destruction that blew up the U.S. financial system and economy in 2008 and led to the biggest bailout of Wall Street in history by the Fed.

The BNP Paribas information comes from a repo loan data dump by the New York Fed this morning – the regional Fed bank that handled all of these secret repo loans from their inception on September 17, 2019 to July 2, 2020.

The Fed has withheld the release of the names of the banks that got these massive loans for two years but is now forced to release them under the provisions of the Dodd-Frank financial reform legislation of 2010. This morning’s data covers the first quarter of 2020. The Fed has previously released the banks’ names for its repo loan bailouts from September 17, 2019 through December 31, 2019 – also after a two-year lag. All of the repo data released thus far is available here. (You have to manually remove reverse repo data before summing the repo columns.)

Mainstream media has heretofore instituted a news blackout on the names of the banks that received the repo loan bailouts and the Fed’s data releases. (See our report on January 3 of this year: There’s a News Blackout on the Fed’s Naming of the Banks that Got Its Emergency Repo Loans; Some Journalists Appear to Be Under Gag Orders.) As of 4:00 p.m. today, we see no other news reports on this critical information that the American people need to see.

The Fed data released this morning shows that the trading units of six global banks received $17.66 trillion of the $28.06 trillion in term adjusted cumulative loans, or 63 percent of the total for all 25 trading houses (primary dealers) that borrowed through the Fed’s repo loan program in the first quarter of 2020.

The normal repo loan market is typically an overnight (one-day) loan market. The Fed started out with one-day overnight loans but then periodically also added 14-day, 28-day, 42-day and other term loans. We had to adjust our cumulative tallies to account for these term loans in order to get an accurate picture as to who was grabbing the bulk of these cheap loans from the Fed. For example, let’s say a trading firm took a $10 billion loan for one-day but on the same day took another $10 billion loan for a term of 14 days. The 14-day loan for $10 billion represented the equivalent of 14-days of borrowing $10 billion or a cumulative tally of $140 billion.

If we simply tallied the column the New York Fed provided for “trade amount” per trading firm, it listed only $10 billion for that 14-day term loan and not the $140 billion it actually translated into.

The trade amount column for the first quarter of 2020 comes to $4.4 trillion while the term-adjusted total comes to $28.06 trillion.