– When The Food Runs Out And Full-Scale Food Riots Hit, ‘The Masses’ Will Finally Believe Their Own Eyes

While we’ve been reporting on ANP for over a year now since soon after the arrival of Joe Biden in the White House back in January of 2021 of growing shortages of all kinds of food products all across the country, with our stories both featuring and based on photographs emailed to ANP from our readers nationwide and around the world who’ve encountered such empty store shelves in their own communities, up until March of 2022, Biden’s White House called shortages of food and supplies in America a ‘conspiracy theory’.

Before Biden finally admitted back on March 24th of 2022 that “the world will experience food shortages as a result of Russia’s invasion of Ukraine” and “it’s going to be real”, as the independent media has been pointing out now for over a year, long before Russia invaded Ukraine, all of these shortages had everything to do with the devastating COVID lockdowns and horrific decisions by US politicians.

So while Biden attempts to blame Putin and Russia for the skyrocketing food prices and shortages in America, anybody who has been paying attention at all to what’s been happening knows that what is nothing less than ‘an attack‘ on America’s food supply began long ago, and can be seen now playing out all across the world in story titles such as these out in the past week+ alone.:

From New Food Magazine: “Civil unrest may not be far away – History has warned us that as food prices rise, rioting is likely to follow. Here, Professor Chris Elliott points to a few key moments in history and calls on the UK Government to wake up.”

From the India Tribune: “Waging war for sustenance: Disruption in supplies due to Ukraine crisis may create food shortage, price distortions“

From the Business Insider, April 10th, 2022: “The war in Ukraine is sending fertilizer prices through the roof. That could spark food shortages in countries already struggling with widespread hunger”

From the Middle East Monitor, April 14th, 2022: “The war in Ukraine has an economic domino effect fueling global social unrest”

From the Hill, April 11th, 2022: “Cindy McCain: Ukraine war ‘forcing us to take from the hungry to feed the starving’”

From CNN, April 9th, 2022: “From Pakistan to Peru, soaring food and fuel prices are tipping countries over the edge”

And with it long warned that only 9 meals separate a civilized society from total anarchy as seen in the videos at the bottom of this story showing us food riots in various locations all across the planet that have happened just recently, the globalists ‘big picture‘ is quickly coming into play and it looks a lot like famine and starvation for ‘the masses’ and all of us ‘useless eaters.’

So while finally, after over a year, the msm is finally reporting on all of this, why now? As we’ve reported time and again on ANP, we’re much better off believing our own eyes than what the msm/white house tells us, and while not all stores across America are experiencing the same shortages, with the MSM finally putting out stories such as this NY Post story titled “Looming food shortages is the next ‘slow-moving disaster’ to hit world”, the handwriting is on the wall.

(ANP EMERGENCY FUNDRAISER: Due to a heavy, new censorship campaign by ‘big tech’ upon ANP articles, we’re being forced to run an emergency fundraising drive. We also want to thank everybody who has donated to ANP over the years. With donations and ad revenue all that keep ANP online, if you’re able, please consider donating to ANP to help keep us in this fight for America‘s future at this absolutely critical time in US history. During a time of systematic, ‘big tech’ censorship and widespread institutional corruption, truth-seeking media and alternative views are crucial, and EVERY little bit helps more than you could know!) 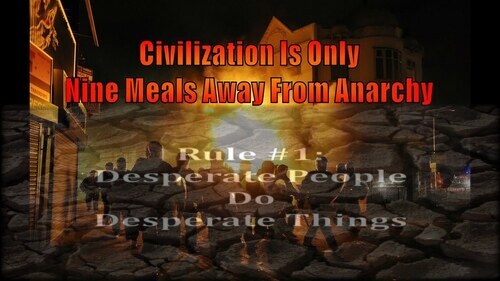 As the above mentioned story from New Food Magazine points out, while food riots and severe civil unrest caused by food shortages might not weigh heavily on the minds of most people in the UK (or here in the US for that matter), things could change in an instant.

With food and water two things of the things that people can’t do without, along with air to breath and some kind of shelter in harsh environments, their story points out that historically, skyrocketing food prices and food shortages have led to all kinds of societal and political chaos and turmoil. Because with hungry people likely to do anything to get their own meals if it means avoiding starving to death, including stealing and killing others if necessary to get food to survive, check out how food shortages and high prices through history have led to chaos and then think about what’s happening today.: