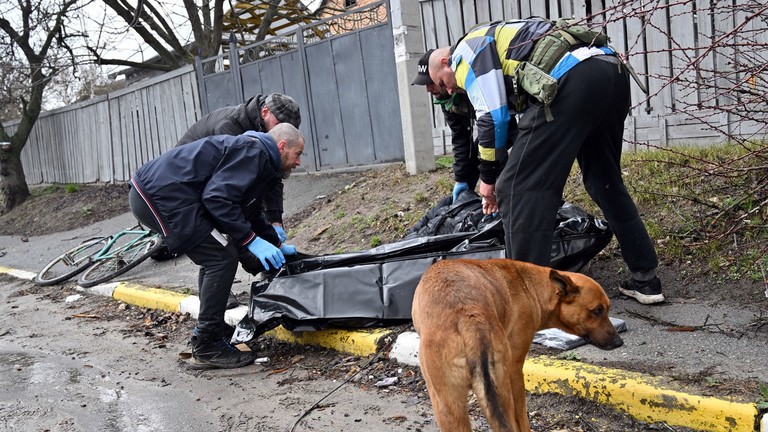 Defense Ministry accuses Kiev of trying to frame its soldiers

Russia’s Defense Ministry claimed, on Tuesday, that Ukrainian security services have staged more alleged killings of civilians in several towns and villages in order to elicit sympathy by prompting media headlines in the West. Officials believe that Kiev is trying to create a narrative of Moscow being responsible for war crimes.

Moscow insists that the same tactics were used by Kiev to blame Russian forces for atrocities in the town of Bucha last week.

The troops of the 72nd Ukrainian Main Center for Psychological Operations conducted another staged filming of civilians allegedly killed by violent actions of the Russian armed forces in order for it to be distributed through the Western media,” spokesman Major General Igor Konashenkov said during a briefing.

According to “confirmed information,” the filming took place in the village of Moschun some 23km northwest of the Ukrainian capital Kiev on Monday, he insisted.

Similar false flag operations have been carried out by the Ukrainian side in the cities of Sumy, Konotop and elsewhere, Konashenkov insisted. He didn’t provide direct evidence to support his claims.

On Saturday, Ukraine distributed graphic footage of multiple corpses lying in the streets of Bucha, alleging that they were executed by Russian troops. Again, no unequivocal proof was furnished.

Moscow, which insists that it has not targetted civilians during its operation in Ukraine, has rejected those accusations as a “provocation” and accused Kiev of mounting a false flag operation.

Officials pointed out numerous inconsistencies in the Ukrainian story, including the fact that the video emerged several days after the Russian forces withdrew from Bucha, and that the local mayor didn’t mention any killings in his video address declaring the “liberation” of the city.

Despite this, the West has immediately decided who to blame for the purported atrocities. US President Joe Biden has demanded a “war crimes trial” for his Russian counterpart Vladimir Putin. However, unlike Moscow, Washington doesn’t recognise the International Criminal Court.

Meanwhile, the EU promised to send its experts to aid Ukrainian authorities in collecting evidence at the site.

Moscow launched a large-scale offensive against Ukraine in late February, following Ukraine’s failure to implement the terms of the Minsk agreements signed in 2014, and Russia’s eventual recognition of the Donbass republics in Donetsk and Lugansk. The German and French brokered protocols had been designed to regularize the status of those regions within the Ukrainian state.