Total assets on the Fed’s weekly balance sheet as of April 20, released this afternoon, declined to $8.955 trillion, roughly the same as on March 16 and below the levels of March 23 and April 13. Beyond the week-to-week ups and downs, caused by the peculiarities of Mortgage Backed Securities (MBS), which we’ll get to in a moment, the balance sheet has flattened out. Balance sheet growth has ended. QE has ended. That part of the marvelous show is over. 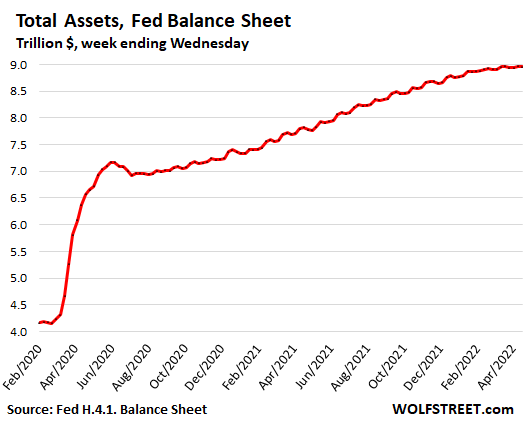 QE was designed to repress long-term Treasury yields, mortgage rates, long-term interest rates of any kind, and to inflate asset prices. It thereby created the biggest wealth disparity ever, documented by my Wealth Disparity Monitor, based on the Fed’s own data.

But then raging inflation got in the way. And the Fed finally started “tapering” its asset purchases in mid-November. Tapering means that the Fed bought less of Treasury securities and MBS than it did before tapering, when it was increasing its assets by about $120 billion a month. After the tapering began this monthly increase began to shrink. Now the balance sheet is no longer increasing, tapering is finished, and QE has ended.

The Fed has also unwound and brought to zero numerous of its emergency measures that it had started in the spring of 2020, including its repos, which it ended in mid-2020, and its corporate bonds and bond ETFs, of which it never bought much to begin with. We’ll get to them in a moment.

Since the beginning of March 2020, the Fed’s holdings of Treasury securities have ballooned by $3.24 trillion, to a total of $5.76 trillion. The balance has now remained roughly flat for several weeks. 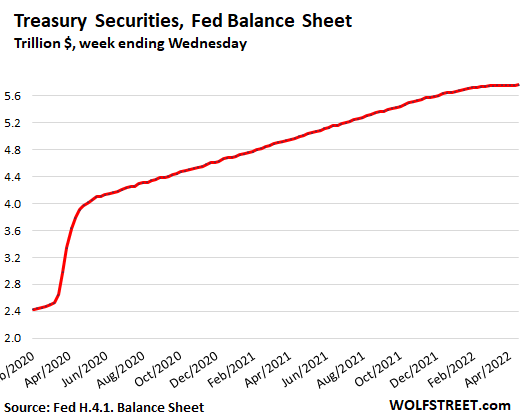 The $5.76 billion of Treasury securities include Treasury Inflation-Protected Securities (TIPS) and the accumulated Inflation Protection on those TIPS. The government compensates TIPS holders for CPI inflation by increasing the principal of the TIPS. The Fed tracks this “Inflation Protection” amount separately from the face value of the TIPS. On its balance sheet today:

The Fed’s sleight of hand with TIPS on market-based inflation expectations.

Since March 2020, the Fed’s proportionally huge purchases dominated the relatively small TIPS market and pushed the TIPS yields into the negative.

With its purchases, the Fed pushed the 10-year TIPS yield into the negative throughout the pandemic. But the Fed has now stopped buying TIPS, and the balance of TIPS is declining on its balance sheet, and TIPS yields began to rise in January (from -1.1% at year-end) to just above 0% on April 19, the first time since March 2020 that 10-year TIPS yield closed in the positive, though for only one day.

Manipulating the TIPS yield to show that “market-based inflation expectations” were “well-anchored,” though inflation had already begun to rage, was one of the cleverest monetary sleights of hand.

The Fed’s holdings of MBS dipped to $2.73 trillion on the balance sheet today, and was roughly flat with the balance on March 16. Since March 2020, the Fed has added $1.36 trillion in MBS.

During period of low and declining mortgage rates, such as during the pandemic, mortgage refis are a huge thing, and the passthrough principal payments become a torrent, and the balance of each MBS shrinks rapidly.

Now it is buying just enough MBS to fill in the estimated amount of passthrough principal payments in order to keep the MBS on its balance sheet level.

But there are two problems with it: