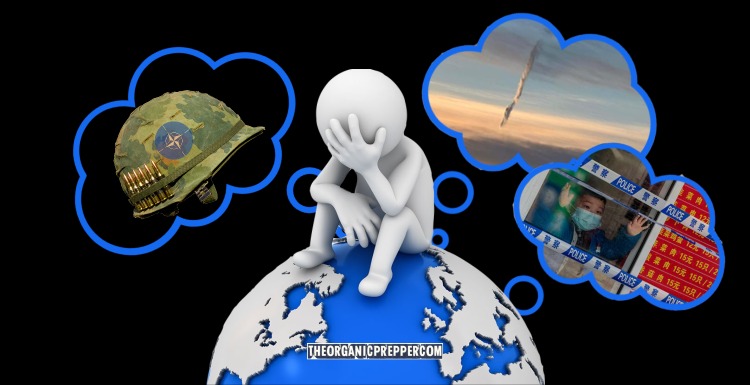 What in the world is going on? Does it not seem as if right now, everything is going crazy? NATO expansion, Shanghai lockdowns, and strange things falling from the sky in Anchorage, Alaska? We’re in the beginnings of a good month.

For starters, do you remember how we here at The Organic Prepper pointed out that talks of NATO expansion into Ukraine were going to lead to a war? Then, it happened. And it looks like we’re geared up to do this again.

It was just two months ago that Moscow told the two Nordic countries that retaliatory measures would be taken against the two nations if they joined NATO. As Russian Foreign Ministry spokeswoman Maria Zakharova said, “It’s obvious that if Finland and Sweden join NATO, which is, first of all, a military organization, it will entail serious military-political consequences, which would require retaliatory steps by the Russian Federation.”

Zakharova went on to say, “We view Finland’s course for maintaining the policy of military non-alignment as an important factor contribution to stability and security in northern Europe and on the European continent as a whole.”

“We can’t fail to see consistent efforts by NATO and some of its members, primarily the US, to drag Finland as well as Sweden into the alliance.”

Finnish Foreign Minister Pekka Haavisto said, “We’ve heard this before,” giving the impression that this was nothing more than Russian saber-rattling.

Shortly afterwards, Russia stated that “Finland’s accession to NATO would have serious military and political repercussions.”

Now, there are alleged reports coming out that up to 60% of Swedes support joining NATO now – up from just 34% a year ago. Those are polls coming out of a media machine, so believe what you will, but those figures at least tell  where the narrative is pushing this all to go.

There was even apparently a meeting amongst foreign ministers of NATO and the Nordic countries discussing the potential of joining NATO.

What happens if those two countries join NATO? Will it be nothing other than saber-rattling that they will experience? Or will there be another massive troop buildup along the border of Finland for another “military drill?”

And let’s not forget. The moment that one of these countries joins NATO, the rest of NATO must become involved if they’re attacked. You could very easily end up in a situation where the entire world gets dragged into something particularly nasty if Sweden and Finland keep pushing this.

Let’s also not forget that the Kremlin gives its battlefield commanders full discretion in whether or not they’ll use tactical nukes (and the definition of a tactical nuke would encompass something the size of Hiroshima).

And then there’s China.

Do you remember the rumors that had been going around about a hemorrhagic fever going around China? Dr. Malone was the man who really popularized this story. I can’t help but think of that when I see things like this come out of Shanghai:

What the?? This video taken yesterday in Shanghai, China, by the father of a close friend of mine. She verified its authenticity: People screaming out of their windows after a week of total lockdown, no leaving your apartment for any reason. pic.twitter.com/iHGOO8D8Cz

Is that what’s happening in China right now? Who knows? But it is the first thing that comes to my mind when I see videos like these come out of there once more.

(For information on how to not starve in your home, check out our free QUICKSTART Guide to building a 3-layer food storage plan.)