by Justin O. Smith, via All News Pipeline: 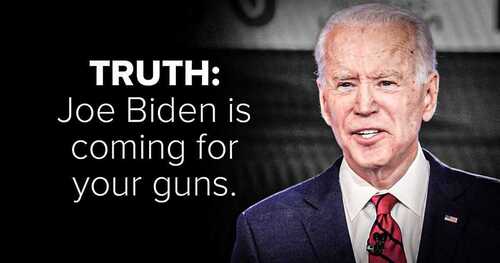 On Monday, April 11th, 2022, America was once again forced to listen to the sound of their Bill of Rights being chipped away and their Inalienable God-given Right to “keep and bear arms” being suppressed by Joe Biden and his high-handed, tyrannical regime, as he unveiled his new plan to illegally and unconstitutionally ban “ghost guns” and enforce “our common-sense gun laws”, which in reality is just one more step towards a total ban of firearms in America. He’s trampling on the Second Amendment, which has absolutely no qualifiers to suggest that anyone may carry a firearm “if” he does this thing or another or “unless” some other circumstance or criteria is met, regardless of how any firearm is made.

I nearly choked when I heard Biden assert that he actually supported our Second Amendment rights. Truth be known, Biden has sought to end all firearm rights of all Americans for most of his political career as he and others championed the 1994 Federal Assault Weapons Ban; but even long before that, Biden had blamed guns rather than the criminals who used them to commit crimes.

Like so many tyrants before him, he disingenuously blames the firearm in order to garner support for more and greater controls placed upon all firearms, since his and all other Democrats’ primary goal is the eventual total disarmament of the American public. They know this is the only way they can ever be able to force their communist agenda upon the country. And although there has been a hard push from the Communists and their sympathizers since the FDR years, the agenda has been given extra emphasis from at least 2020 to the present.

His agenda and the agenda of the Democratic Party Communists could not be clearer once one hears Biden state: “These guns are weapons of choice for many criminals … [and this regime] is going to do everything we can to deprive them of that choice. … this should just be the start [and the U.S. needs to] repeal the liability” shield of America’s gun manufacturers.

The new Biden Rule also serves as a backdoor method for forcing the registration of all firearms and creating a national data bank of firearm owners, for any purpose the government may find. It requires serial numbers and background checks on anyone purchasing a kit in the same manner as required with commercially produced firearms.

Biden’s logic is void of cogent thought as he calls ghost guns “the weapon of choice for many criminals”. Criminals don’t care if a firearm has serial numbers or not. They never use a firearm that is actually documented as theirs through a “legal” purchase from an authorized gun dealer, and most usually use stolen firearms rather than purchasing a gun kit to assemble a firearm that bears no serial number.

One should also remind Biden that zip guns and homemade firearms have been around for the last two centuries in America. My fine friend, Ronnie Barrett, who lives just up the road from me, actually designed his now world-famous Barrett .50 caliber Rifle at his kitchen table and built the first prototype on his own garage floor, perfectly illustrating that where there’s a will one will find a way.

But the fact remains that a firearm doesn’t require a serial number to be a lawful weapon for self-defense under the Second Amendment. As a matter of fact, any federal or state “law” making it more difficult for anyone to keep and bear arms stands in direct conflict with the Second Amendment’s requirement that such an inalienable right “shall not be infringed”, and they are overt and blatant attempts to abrogate our lawful right to self-defense.

A firearm is simply one item included in “arms”. Anything can be used as a weapon to defend ourselves, from less-than-palm-sized rocks to hammers and knives and ax handles, all of which I’ve had occasion to use myself, at one time or another. Are we to now ban them or require them to have serial numbers too and be registered with some federal agency, the DOJ, FBI, or ATF?