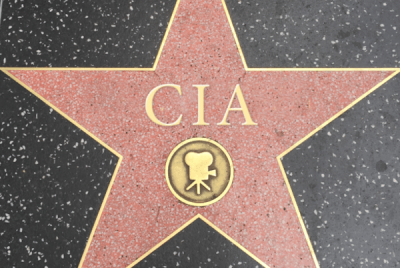 In 2012, Argo won the Academy Award for Best Picture. The film starred Ben Affleck as a CIA agent named Tony Mendez who poses as a Hollywood producer scouting locations in Iran.

With the CIA reviewing the script, Argo “took many liberties with the truth,” according to The Atlantic magazine, “all geared to make Langley more heroic.”

Left out was any hint that the CIA had created the crisis in Iran by backing a coup in 1953 that overthrew Iran’s democracy.

A decade earlier, Affleck had starred in The Sum of All Fears, a film adaptation of a Tom Clancy novel written largely by the CIA’s entertainment liaison, whose main protagonist, Deputy CIA Director Jack Ryan, stops nuclear war from breaking out.

During Argo’s filming, the CIA brought the filmmakers to Langley for a tour and offered Affleck access to Agency analysts. Former CIA Agent John Kiriakou recalled bumping into Affleck in Langley along with other Hollywood stars such as Harrison Ford.

Theaters of War: How the Pentagon and CIA Took Hollywood is a new documentary produced by the Media Education Foundation exposing the link between the CIA, Pentagon and Hollywood.

The film follows the journey of media professor Roger Stahl across America as he interviews people—including industry insiders—who detail how the military and CIA have tried to valorize their activities in hundreds of Hollywood films and television shows, scrubbing scripts of war crimes, corruption, racism, sexual assault, coups, assassinations and torture.

The propaganda is extremely effective because it is carried out under the guise of entertainment. Only very subtly are viewers conditioned.

One of the most poignant scenes of Theaters of War has Stahl bringing Oliver Stone a framed copy of a 1984 rejection letter he received by the Pentagon’s entertainment office for Platoon, a film about the disintegration of the armed forces in Vietnam. In 1987, Platoon won the Academy award.

Donald E. Baruch, the head of the Pentagon’s Office on Entertainment, wrote to Stone in the rejection letter: ”In our opinion, the script basically creates an unbalanced portrayal by stereotyping black soldiers, showing rampant drug abuse, illiteracy and concentrating action on brutality.”

Stone told Stahl that for years he had to shelve Platoon, whose script was written in 1975, along with Born on the Fourth of July, another anti-war film based on the biography of paralyzed veteran Ron Kovic.

According to Stone, the Pentagon’s entertainment office was “set up to provide accuracy to film-making about the military, but instead they do the opposite; they promote inaccuracies and lies.”

“They only want movies that glorify the American soldier, glorify our patriotism, the homeland and nationalism, this nonsense. They fetishize the military,” he said. “Nobody can say a bad word about [the military], which is wrong. You have to point out evil when it happens.”

Stone told Stahl that, while he was having trouble getting Platoon made, he was offered the script for Top Gun, a major hit of 1986 which romanticized the life of Navy pilots and had military recruiting stations set up outside theaters where it was being screened.

The Pentagon had donated F-14s for making Top Gun, which it praised for helping to “completely rehabilitate the military’s image [after it] had been savaged by the Vietnam War.”

In 2018, the Pentagon signed a contract with the producers of a Top Gun remake scheduled for release this year that allowed it to “weave in key talking points, oversee the script and require an official screening before its release.”

Documents Expose How Hollywood Promotes War on Behalf of the Pentagon, CIA and NSA

The original Top Gun was directed by the late Tony Scott and produced by Jerry Bruckheimer, who went on to produce Black Hawk Down (2001), a re-creation of the ambush of U.S. soldiers in Somalia.

After days of negotiation with Bruckheimer, Secretary of Defense William Cohen donated equipment for the film and the script was changed from the original to create heroes of the U.S. soldiers, even though the intervention was widely considered, as Stone put it, “a mess.”

In the 1980s, films that did not get made included a dramatization of the Iran-Contra affair and film about the reduction of Cold War tensions, which was substituted with Red Dawn, in which a group of high school students led by Patrick Swayze and Charlie Sheen organize themselves to fight a Soviet invasion of the U.S. (a 2012 sequel had students organizing against a North Korean invasion).

From 1989 to 2018, the Pentagon’s Office on Entertainment was directed by Phil Strub, who worked closely with favored directors such as Bruckheimer and Michael Bay, producer of Transformers (2007), and helped promote sci-fi films where superheroes saved civilization with military weapons in alliance with the U.S. military.

Strub had a scene removed from The Windtalkers (2002), where U.S. Marines took out the gold teeth of Japanese soldiers they had killed as trophies—something described in E.B. Sledge’s classic memoir, With the Old Breed: At Peleliu and Okinawa (1981).

Strub also made sure that Tuskegee Airmen (1995), about Black fighters in World War II, presented the Army’s top generals as non-racists (the only racists in the film were depicted as bad apples).

The U.S. army subsidized TV series The Long Road Home (2017), meanwhile, depicted Tomas Young, a paralyzed Iraq veteran and peace activist, as a “pussy” and douchebag,” when, according to members of his platoon, he was “well liked,” and considered “cool.”

Young’s portrayal was consistent with the denigration of antiwar veterans and activists in popular culture, which the Pentagon’s Office on Entertainment was in part behind.

No Guts or Glory

Strub and his predecessor Don Baruch cultivated an academic hack, Lawrence Suid, to cover up the truth about what the Pentagon’s entertainment office did.

Suid wrote the book Guts & Glory: The Making of the American Military Image in Film(Lexington, KY: The University Press of Kentucky, 2002) which for years stood as the definitive work on the Pentagon and Hollywood.

When more independent scholars came along to challenge Suid’s interpretations, Suid savagely attacked them in academic journals and tried to ruin their careers.

Chase Brandon, the CIA’s entertainment industry liaison from 1996 to 2007 and first cousin of actor Tommy Lee Jones, was thought to be the prototype for Robert DeNiro’s character, Conrad Breen, in Wag the Dog (1997). Breen was a CIA spin doctor who manufactures a fictional war in Albania to displace attention from a presidential sex scandal.

A forty-year CIA veteran with experience in special operations and psychological warfare, Brandon wrote most of the script for the 2003 film The Recruit, and helped set up a permanent CIA network in Hollywood that Ben Affleck hinted at.

Brandon’s office also altered the script of the 2000 comedy Meet the Parents, which featured Robert DeNiro as a CIA agent whose daughter has decided to marry a goofball played by Ben Stiller.

When Stiller’s character enters DeNiro’s workspace, in the original script, he finds CIA torture manuals. However, the script was changed to show Stiller finding only pictures of DeNiro’s character meeting famous people like Bill Clinton.

Another film that Brandon helped shape was Charlie Wilson’s War (2007) which heroized the CIA for defeating the evil commies in Afghanistan. CIA agent MIlt Beardon served as one of the film’s consultants.