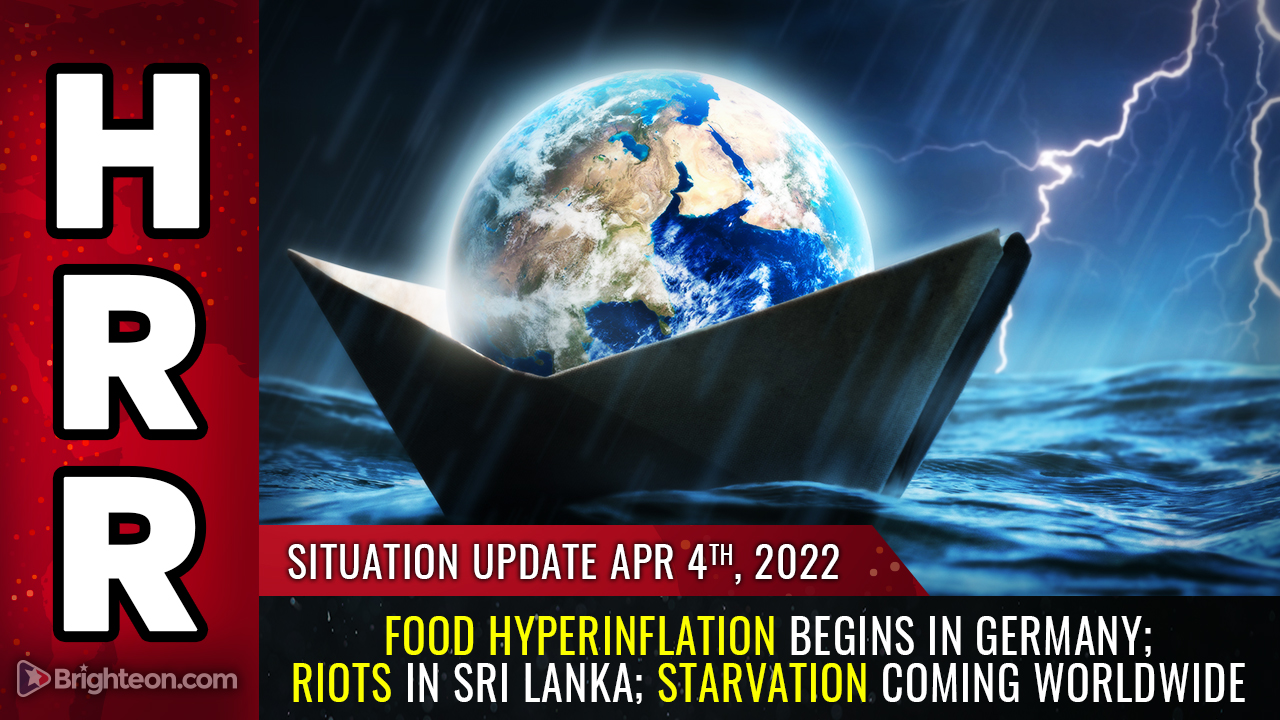 The people of Germany awoke to food hyperinflation today, with retail grocery prices suddenly spiking 20% – 50% in just one day, reports Reuters. The story was covered by Zero Hedge as well, which reported, “Recently, popular retail chains such as Aldi, Edeka and Globus announced that they would be forced to raise their prices. At Aldi, meat and butter will be “significantly more expensive” from Monday due to price hikes from its suppliers.”

In today’s Situation Update podcast (see below), I detail the timeline of what’s happening with food scarcity and food inflation worldwide:

Food scarcity is also colliding with currency inflation due to unrelenting money printing by nearly every central bank around the world. This currency devaluation will make food even more expensive at retail. Making matters worse, political leaders will tend to print more money and hand it out to people to try to prevent food riots, thereby adding yet more inflation to the equation, leading to an out-of-control spiral of hyperinflation, scarcity and starvation.

The problem is that you can’t print food or fuel. You can print “money,” but more paper money floating around doesn’t bring back food on the shelves. If anything, the more money you print, the worse the whole problem becomes.

Developing nations will be hit the hardest, where food prices of just 20% can mean the difference between sustenance vs. starvation. Developed nations can absorb more price increases without suffering social unrest, but there’s a real limit to how much inflation and scarcity those nations can absorb as well. Ultimately, as food scarcity and price inflation worsens, we are looking at global food riots, starvation, social unrest and violent revolutions taking place across the planet over the next several years.

Unintended consequences: How the West destroyed the global food supply chain by trying to punish Russia

This all stems from the economic sanctions placed on Russia by the West. It was those sanctions that set off the cascading effects of “commodities protectionism” which has led to an accelerating collapse in global trade of grains, energy and fertilizer. The collapsing global supply chain has also worsened the ability for farmers to acquire critical parts for running their machinery, and fertilizer prices have led to radical increases in the cost to grow food crops. (Rising fuel prices are also a huge factor that’s making farming even more expensive.)

In Sri Lanka, riots have broken out over rising food and fuel prices. Bloomberg reports that the government is already censoring social media and banning public gatherings in an effort to quell the rising demonstrations there:

Several dozen opposition lawmakers had set off on a march toward Independence Square in Colombo, defying a weekend curfew although they were stopped by armed troops. Restrictions to several social media platforms including Facebook, YouTube, TikTok, Twitter and WhatsApp were lifted after nearly 13 hours, users reported online.

Sri Lanka is just the first sign of events yet to come for most of the world. It’s only a question of the timing for food scarcity and price inflation to ripple through various nations and continents.

And yes, food riots are coming to America later this year. It might be good time to take a refresher self defense course, given that grocery thefts, looting and flash mobs will become commonplace in many American cities.

Joe Biden is trying to blame all the inflation on Putin, but the simple truth is that much of the inflation now being experienced is a direct result of the trillions in money printing that took place during the covid plandemic, both under Trump and Biden.

The more recent effects of scarcity are more the result of Biden and western nations financially de-platforming Russian banks, prohibiting them from trading in dollars or euros, effectively cutting off imports and exports from Russia. This has led to near-instant scarcity of agricultural inputs like fertilizer, as well as scarcity in food crops such as wheat, corn, soy, sunflower oil and more.

Combined with the bizarre fact that the USDA is paying US farming to destroy their crops rather than harvest them, we are witnessing a total weaponization of food scarcity against humanity. Following the depopulation vaccine bioweapons, we now face a starvation carpet bombing of the planet via engineered food scarcity and inflation, all of which will only be worsened by yet more money printing. Biden’s proposed budget for 2023, for example, requests budgets spending of about $1 trillion every two months. That will be augmented, of course, by more “emergency” bailout money, to the point where the United States will soon be burning through a trillion dollars a month.

This is the last chapter of the final blowout of the US empire and its debt-based currency which was decoupled from gold in 1971. With $30 trillion in debt already accrued — and perhaps another $9 – $10 trillion that will be spent in the next government fiscal year, we are very rapidly approaching debt levels of $50 trillion in just the next couple of years. If we even make it that far, the dollar collapse won’t be far behind.

Everybody who has any remaining IQ points at all is right now fleeing the dollar and getting into food, gold, silver, land, used vehicles, ammunition, firearms and the like. Nobody with any brains wants to be left holding dollars when the music stops.

Get the full report in today’s Situation Update podcast

I cover all this in much more detail in today’s Situation Update podcast. Find it here: