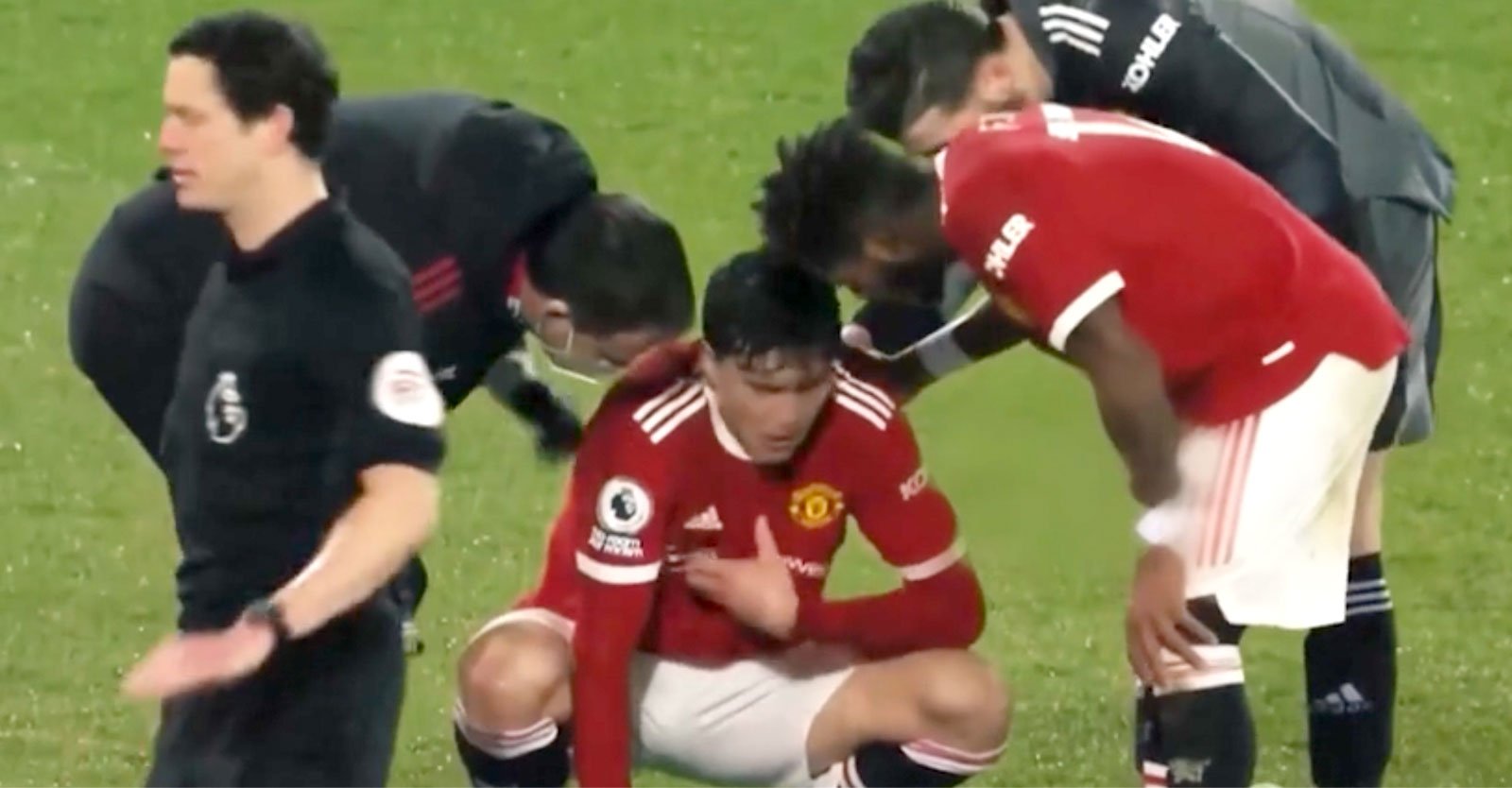 More than 769 athletes have collapsed on the field during a game from March 2021 to March 2022. The shocking statistic was revealed by One America News Network (OAN), which also found the average age of the athletes who suffered cardiac arrest is just 23 years old.

The unprecedented surge in cardiac arrest and other heart issues among elite athletes coincides with the rollout of COVID-19 jabs.

The Miami Open made headlines in early April after 15 players — all of whom had reportedly received COVID-19 injections — dropped out.

Among them were favorites Paula Badosa and Jannik Sinner. Badosa left the court in tears after becoming unwell, and Sinner’s opponent said he saw him “bend over” on the court, noting “it was very strange.”

Even the fans were confused, with one stating, “What is going on?”

As Pearson Sharp of OAN explained, “These are just two of more than 769 athletes who have collapsed during a game, on the field, over the last year.” He continued:

“Coincidence? When the Pfizer vaccine is known to cause heart inflammation? No. In fact, many doctors treating these players list their injuries and deaths as being directly caused by the vaccine … This is not a coincidence.”

VAERS may not show the whole picture

As of April 1, the Vaccine Adverse Event Reporting System (VAERS), which is where adverse events caused by COVID-19 jabs in the U.S. are supposed to be collected, lists 26,693 deaths along with 147,677 hospitalizations in association with the COVID-19 shot.

Myocarditis and pericarditis cause symptoms such as chest pain, shortness of breath and a fluttering or pounding heart.

Cases have occurred most often after mRNA COVID-19 injections (Pfizer-BioNTech or Moderna), particularly in male adolescents and young adults, according to the CDC. Further, myocarditis occurs more often after the second injection, usually within a week.

Past investigations have shown only between 1% and 10% of adverse reactions are ever reported to VAERS, which is a passive, voluntary reporting system, so the actual number could be much higher.

Kyle Warner is one athlete who filed a VAERS report about his own health injuries following the COVID-19 jab. It took him 45 minutes to complete — a length of time that many doctors can’t or won’t devote when it comes to reporting adverse vaccine reactions seen among their patients.

Warner, who is 29 years old, was at the peak of his career as a professional mountain bike racer when, in June 2021, he got his second dose of Pfizer’s COVID-19 shot. He suffered a reaction so severe that, months later, he was still spending days in bed, easily overwhelmed by too much mental or physical exertion.

Despite the rising number of adverse effects being reported in VAERS, top government officials, such as NIAID director Dr. Anthony Fauci and CDC director Dr. Rochelle Walensky, have attempted to discredit it.

Most notably, this occurred during a Senate hearing when both individuals implied that if a person had received the jab and was then killed in a car accident, it’s possible it could be recorded in VAERS as a vaccine injury.

However, while anyone can make a report to VAERS — a component that critics use to claim that VAERS can contain errors and even false claims — due to the lengthy and complicated submittal process, adverse events are notoriously under — not over — reported.

Unfortunately, many doctors are unwilling to acknowledge that the COVID-19 shots might be related to patients’ injury complaints, and many who have been injured find their stories have remained hidden from public view, with YouTube, Instagram, Facebook and other social media platforms censoring their personal stories and videos.

Some, however, have made it through to mainstream media, including:

The symptoms, which included breathing problems and arm pain, started after the first dose, but doctors brushed off his shortness of breath as related to stress and fatigue. About a month after his second dose, shortness of breath and body pain returned. Only after testing at a sports clinic was the pulmonary embolism revealed.

U.K. football legend and sports commentator Matt Le Tissier, featured in the video above, is among those who have been speaking out about the large number of athletes who have collapsed or died on the field — and he lost his job as a commentator because of it.

In an interview with Red Voice Media, Le Tissier is asked about his thoughts on the surge of cardiac events in the sporting world, to which he responded:

“I’ve never seen anything like it. I played for 17 years. I don’t think I saw one person in 17 years have to come off the football pitch with breathing difficulties, clutching their heart, heart problems …

“The last year, it’s just been unbelievable how many people, not just footballers but sports people in general, tennis players, cricketers, basketball players, just how many are just keeling over. And at some point, surely you have to say this isn’t right, this needs to be investigated.”

By December 2021, 300 reports of athletes collapsing, and some dying, had already been collected, including high-profile European Soccer star Adama Traore, who clutched his chest and collapsed on the field.

An updated report by Good Sciencing, a team of investigators, news editors, journalists and “truth seekers,” has detailed 890 cardiac arrests and other serious issues among athletes, including 579 deaths, following COVID-19 shots.

It’s Time to Follow the Science. Join our Campaign!

They’re maintaining a “nonexhaustive and continuously growing list of mainly young athletes who had major medical issues in 2021/2022 after receiving one or more COVID vaccines” and note:

“It is definitely not normal for so many mainly young athletes to suffer from cardiac arrests or to die while playing their sport, but this year it is happening. Many of these heart issues and deaths come shortly after they got a COVID vaccine. While it is possible this can happen to people who did not get a COVID vaccine, the sheer numbers clearly point to the only obvious cause.

“… Initially, many of these were not reported. We know that many people were told not to tell anyone about their adverse reactions and the media was not reporting them. They started happening and ramping up after the first COVID vaccinations.

“The mainstream media still are not reporting most, but sports news cannot ignore the fact that soccer players and other stars collapse in the middle of a game due to a sudden cardiac arrest. Many of those die — more than 50%.

“We also note that many posts in Facebook, Instagram, Twitter, forums and news stories are being removed. So now we are receiving some messages saying there is no proof of the event or of vaccination status. That is partly because this information is being hidden.”

Gary Dempsey, a professional soccer player with a nearly two-decade career, also tweeted just how unusual the recent wave of cardiac events among athletes is:

“Was a professional for nearly 20 years. From 1996. Played nearly 500 games. Club and international level. Never ever was there 1 cardiac arrest. Either in the crowd or a player. It’s actually quite scary.”

Heart issues and Bell’s palsy ‘through the roof’

This is from a main stream sports channel in Australia pic.twitter.com/HJHWAlEpRg

The video above is from a mainstream sports channel in Australia, detailing another professional athlete, Ollie Wines, who is out of the game due to nausea, dizziness and heart palpitations.

With cases like this becoming impossible to ignore, the “Sunday Footy Show” panel speculated that the health issues could be linked to COVID-19 shots, and one of the hosts acknowledged that multiple players have suffered from heart issues and Bell’s palsy following COVID-19 booster shots. “Wards filled with people suffering the same issues,” he said.

Former professional footballer Matthew Lloyd, who was recently diagnosed with Bell’s palsy, stated, “Heart issues and Bell’s palsy have gone through the roof since the boosters and COVID issues.”

During phase 3 clinical trials of mRNA COVID-19 shots, more cases of facial paralysis occurred in the vaccine groups (seven out of 35,654) compared to the placebo group (one out of 35,611), leading the U.S. Food and Drug Administration to recommend monitoring vaccine recipients for facial paralysis.

Lloyd also said that he’s heard of many cases of heart issues similar to Wines’. “We had [sports journalist] Michelangelo Rucci on … and he said that there’s a ward filled with people with similar symptoms to Ollie Wines — nausea, heart issues — so there has to be something more to it.”