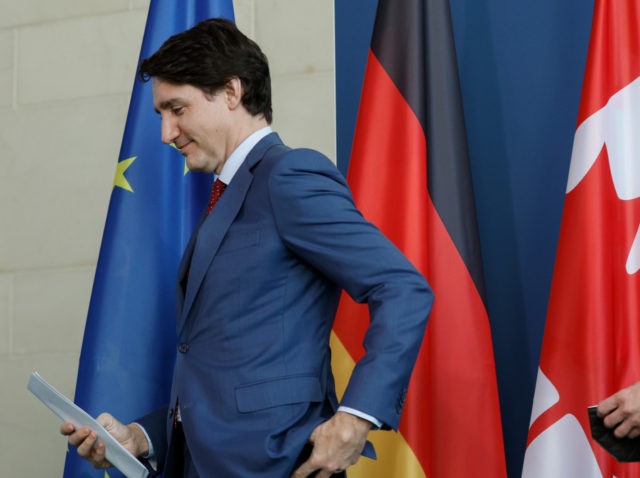 A number of European Parliament members have taken aim at Canada’s Prime Minister Justin Trudeau for his harsh crackdown on the country’s Freedom Convoy truckers.

Justin Trudeau received an extremely hostile welcome to Brussels from a number of Members of the European Parliament (MEPs) on Wednesday, who slammed the Liberal Party leader for his crackdown on the Freedom Convoy protests which took place in his country earlier in the year.

Trudeau made the trip to the European Union assembly in order to call on European leaders to begin “strengthening our democracies” to better face up to Russia’s President Vladimir Putin.

However, Trudeau’s calls have somewhat backfired, with MEPs accusing the leader of hypocrisy considering his crackdown on anti-lockdown protests throughout his country.

🇨🇦🇬🇧|Yesterday, Canada’s Prime Minister @JustinTrudeau visited the #EU Parliament to give a speech. I took the opportunity to give him an appropriate “welcome” there. Short, concise and right hitting the bull’s eye! #ID pic.twitter.com/qpcQyGTixQ

“Justin Trudeau cannot come to lecture Putin on democracy in the European Parliament when he walks with hobnail boots over the fundamental rights of the Canadians,” Cristian Terhes — a Romanian MEP for the European Conservatives and Reformists (ECR) group — told Breitbart London.

“People are made now to choose between the Russian imperialist tyranny, promoted by Putin, and the Neo-Marxist tyranny promoted hypocritical leaders such as Trudeau, in which people are deprived of their rights and freedoms and become objects of the state,” he continued.

“We must reject both such tyrannical options, and fight for the same conservative values that brought peace through prosperity in Europe: national sovereignty, individual freedom, and respect for human rights,” Terhes concluded.

Other MEPs spoke just as harshly against the Canadian leader, with Christine Anderson taking aim at the political leader’s past praise for China’s “basic dictatorship”.

“[I]t would have been more appropriate for Mr Trudeau — Prime Minister of Canada — to address this house according to article 144,” the Alternative for Germany (AfD) politician began. “An article which was specifically designed to debate violations of human rights, democracy, and the rule of law, which is clearly the case with Mr Trudeau.”

“Then again, a Prime Minister who openly admires the Chinese ‘basic dictatorship’, who tramples on fundamental rights by persecuting and criminalising his own citizens as terrorists, just because they dared to stand up to his perverted concept of democracy, should not be allowed to speak in this house at all,” she continued.

“Mr Trudeau, you are a disgrace for any democracy,” Anderson concluded. “Please spare us your presence.”