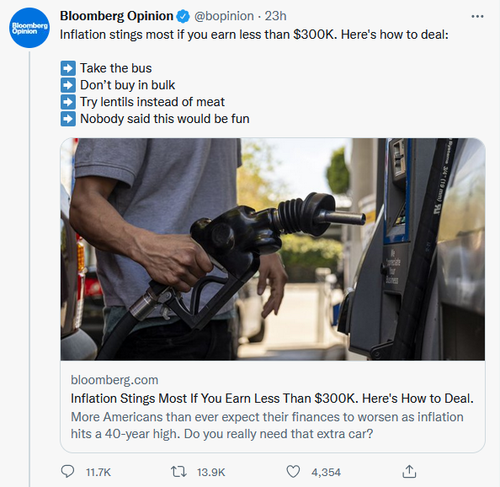 Did you see the ratio Bloomberg just earned for a tweet which recommends getting used to lentils instead of meat, switching to public transportation, and avoiding buying things in bulk?

The piece, written by economist Teresa Ghilarducci, recommends that families earning under $300,000 per year consider switching to public transportation, embracing a veggie diet, and “rethink those costly pet medical needs.”

The intellectual heavyweight oddly retweeted someone slamming her advice.

Which is being parodied throughout social media…

Unsurprisingly, Ghilarducci and the far-left “New School for Social Research” she works for is affiliated with the World Economic Forum (WEF) – which, in addition to bragging about having ‘infiltrated‘ various world governments – infamously suggested that people get used to eating bugs due to inevitable food shortages, and