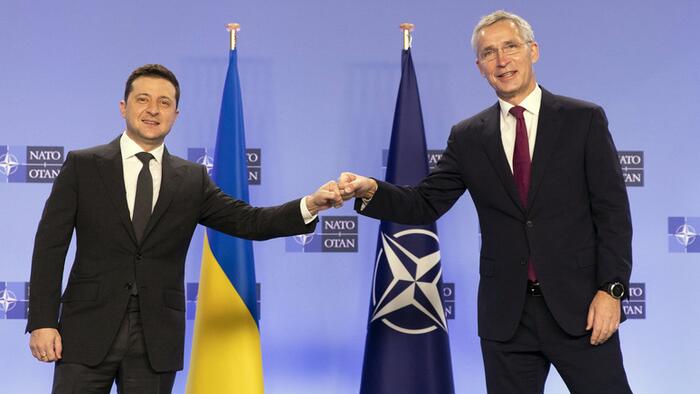 (Update 9:10am ET): In what may be a repeat of yesterday’s “buy the Ukraine ceasefire speculation, sell the lack of follow through“, moments ago futures spiked to session highs when Ukraine president Zelensky’s deputy chief of staff Ihor Zhovkva echoed what the president told ABC in the Monday night interview, saying that Ukraine is ready for a diplomatic solution and will discuss neutrality, but need a security guarantee…

“Surely, we are ready for a diplomatic solution,” Ihor Zhovkva, Zelenskiy’s deputy chief of staff, told Bloomberg Television on Wednesday. Guarantees should come from Ukraine’s neighbors, he said, without specifying further.

But just as quick as the initial euphoria arrived, it fizzled after a Bloomberg headline indicated that Ukraine isn’t willing to go with two of Putin’s three demands, namely relinquishing Crimea and accepting Donetsk and Lugansk as independent republics:

Which also seems like a dead end, because as JPMorgan said last night, “Ukraine is no longer insisting on NATO membership, though EU membership would give similar protections.”

So on net, looks like another non-starter, but at least some negotiating back and forth, now that Ukraine’s core demand for membership in NATO appears to no longer be on the table.

Here is a summary of the relentless firehose of all Ukraine war news to hit in the past few hours, courtesy of Newsquawk.