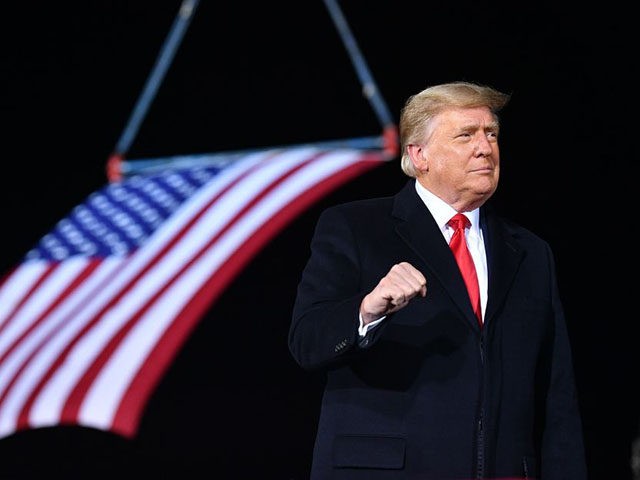 Former President Donald Trump floated the idea of running for president again in 2024 as he spoke to a large crowd at a rally in Commerce, Georgia, on Saturday night.

Trump made the suggestion toward the beginning of his speech, which was livestreamed by Right Side Broadcasting. “The truth is I ran twice, I won twice, and I did much better the second time,” Trump said, referencing his belief that alleged voter fraud lost him the election in 2020.

Trump then added, “And now we just may have to do it again,” a comment that generated some of the loudest applause of the evening.

Trump focused the first portion of the rally mostly on the 2020 election as he heavily promoted his endorsed candidate for Georgia governor, former Sen. David Perdue (R-GA).

“David Perdue will never surrender to Stacey Abrams and the militant radical left, not going to happen with your vote. We’re going to rescue the state of Georgia from the RINOs,” Trump said. Abrams is the Democrat voting rights activist running for governor in the general election after having narrowly lost to now-Gov. Brian Kemp (R) in her first run for governor in 2018.

Trump has continuously blamed Kemp for complacency over the modified voting processes in Georgia’s 2020 election, which occurred both because of coronavirus cases surging in 2020 and because of legal pressure from Democrats. Trump reiterated his gripes with Kemp throughout the beginning of his rally, charging that Kemp “bent to Stacey Abrams.”

Trump shifted the focus of much of the remainder of the rally onto Biden and national issues, saying at one point that Biden, after a little more than a year in office, “has managed to kill, literally kill, the American dream.”

“But do not lose hope, because with the right leadership America will be back greater, stronger, and more powerful than ever,” Trump added.