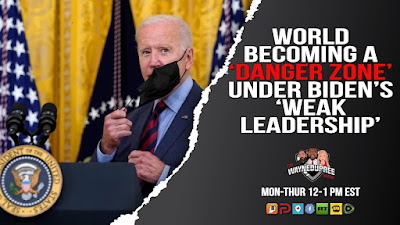 Aside from the Biden regime’s becoming the number one funder of terrorism in his dealing with Iran, as well as his constant ad-libbed statements forcing the White House clean up crew to run around explaining what he “meant” to say, and the world watching the socialist, radical liberal faction of the Democrat party pushing him around, we see a number of world events occurring that clearly shows how disrespected Biden, therefore the U.S. has become by hostile nations since Biden took office.

The reason America has been known as a “world leader”  in the past was because of strength, and the appearance of the willingness to do whatever had to be done to protect American interests.

We made decent strides to earn that reputation back again under President Trump, whether from Trump’s instinct and speaking in terms those hostile to the U.S. understand best, even to the point of talking smack, or simply the belief  by hostile nations that Trump would level their nations if they attacked America or American interests, matters not.

The cause isn’t the point, the effect is.

• Moscow didn’t move against Ukraine under Trump, yet did under Obama and now Biden.

Remember how freaked out the media was when Trump told North Korea that his nuclear button was “bigger & more powerful” than theirs? Obviously he spoke the only language they understood, and it worked.

• China made no overly warlike moves against the U.S. for fear that Trump may have just leveled Beijing. Whether he would have or not, the perception of strength, mixed with a little bit of “berserker,” kept many nation in check from attacking U.S. interests.

• The Taliban was beaten back in Afghanistan until Biden’s disastrous withdrawal, handled in a manner that left Americans and allies stuck in Afghanistan, and resulted in the death of 13 U.S. Service members.

• The U.S. military was being strengthened under Trump. Now readiness and physical standards are being  lowered, making our military weaker, under Biden

Service leaders hoped the newer test — the first such change in more than 40 years — would better replicate tasks needed for combat while reducing the risk of injuries.

But the new fitness curriculum was quickly criticized after it became clear women, older male soldiers and National Guard and Reserve troops had difficulty passing it.

About 44 percent of women failed the test from October 2020 to April 2021, compared to about 7 percent of men, Military.com found at the time.

Those examples and more, show the Trump effect and America first policies, gave hostile nations and our enemies pause when even thinking about pushing Trump’s “buttons.”

In just one year and two months, all that has changed. 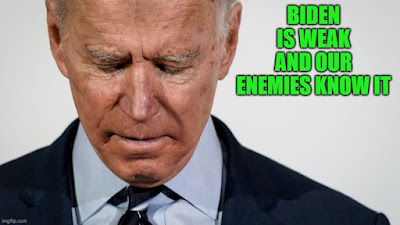 BIDEN IS WEAK AND HOSTILE NATIONS KNOW IT

While America’s MSM does everything in their power to protect Biden from his own words, actions and policies, the international media has noticed, so it has become global news, and our enemies and/or hostile nations…. know it.

• Now, even Ukraine, a nation we have sanctioned Russia for invading, is taunting and humiliating the U.S. under Biden by called the west “afraid” of Moscow.

President Volodymyr Zelenskyy demanded in a video message late Saturday that Western nations provide a fraction of the military hardware in their stockpiles and asked whether they were afraid of Moscow.

“We are waiting for 31 days already. So who is governing the Euro-Atlantic community? Is it really still Moscow through intimidation?” Zelenskyy said. 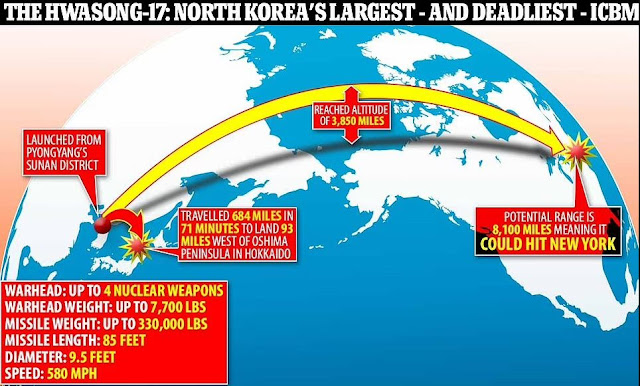 • North Korea ‘is preparing for its first nuclear test in five years’ just days after testing ‘monster’ ballistic missile that can reach anywhere in the US, reports The Daily Mail and others.

The latest information about North Korea’s nuclear test plans comes from South Korea’s military and intelligence authorities, who say they have detected signs the North is restoring an underground testing facility that was shuttered during negotiations in 2018.

Work at the mountainous site in the country’s northwest appears to have taken a turn that suggests the restoration of access to Tunnel 3 is a high priority.

• China has “fully militarized isles in South China Sea ,” according to multiple reports.

China has fully militarized at least three of several islands it built in the disputed South China Sea, arming them with anti-ship and anti-aircraft missile systems, laser and jamming equipment and fighter jets in an increasingly aggressive move that threatens all nations operating nearby, a top U.S. military commander said Sunday.

U.S. Indo-Pacific commander Adm. John C. Aquilino said the hostile actions were in stark contrast to Chinese President Xi Jinping’s past assurances that Beijing would not transform the artificial islands in contested waters into military bases. The efforts were part of China’s flexing its military muscle, he said.

• The Taliban has backtracked on their word and closed Afghan girls’ schools hours after reopening. It is fair bet that everyone knew the Taliban would not honor their word, but Biden’s withdrawal was done in a manner which left everything, including what Forbes described in a headline as “Staggering Costs – U.S. Military Equipment Left Behind In Afghanistan.”

In a letter to Secretary of Defense Lloyd Austin, the lawmakers said they were “horrified” to see photos of Taliban militants taking hold of military equipment, including Black Hawk helicopters.

“It is unconscionable that high-tech military equipment paid for by U.S. taxpayers has fallen into the hands of the Taliban and their terrorist allies,” the lawmakers said in the letter. “Securing U.S. assets should have been among the top priorities for the U.S. Department of Defense prior to announcing the withdrawal from Afghanistan.”