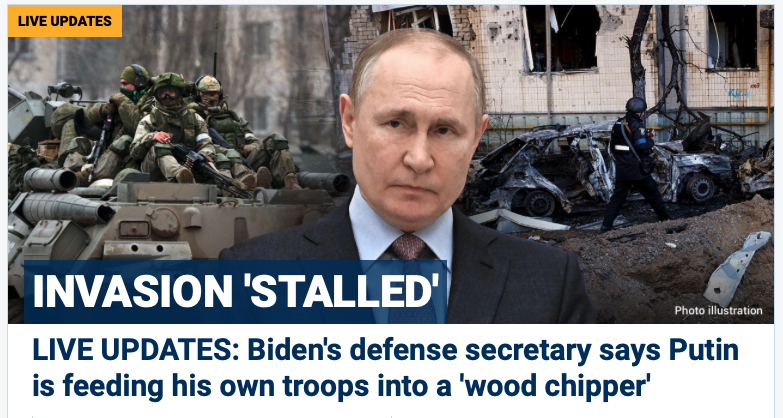 This is much bigger than just a war between two countries. This is a global realignment that is truly a Godsend.

The American media has headlines like these (I even linked them, where possible, for your daily dose of fake news and depression, or at least delusion): 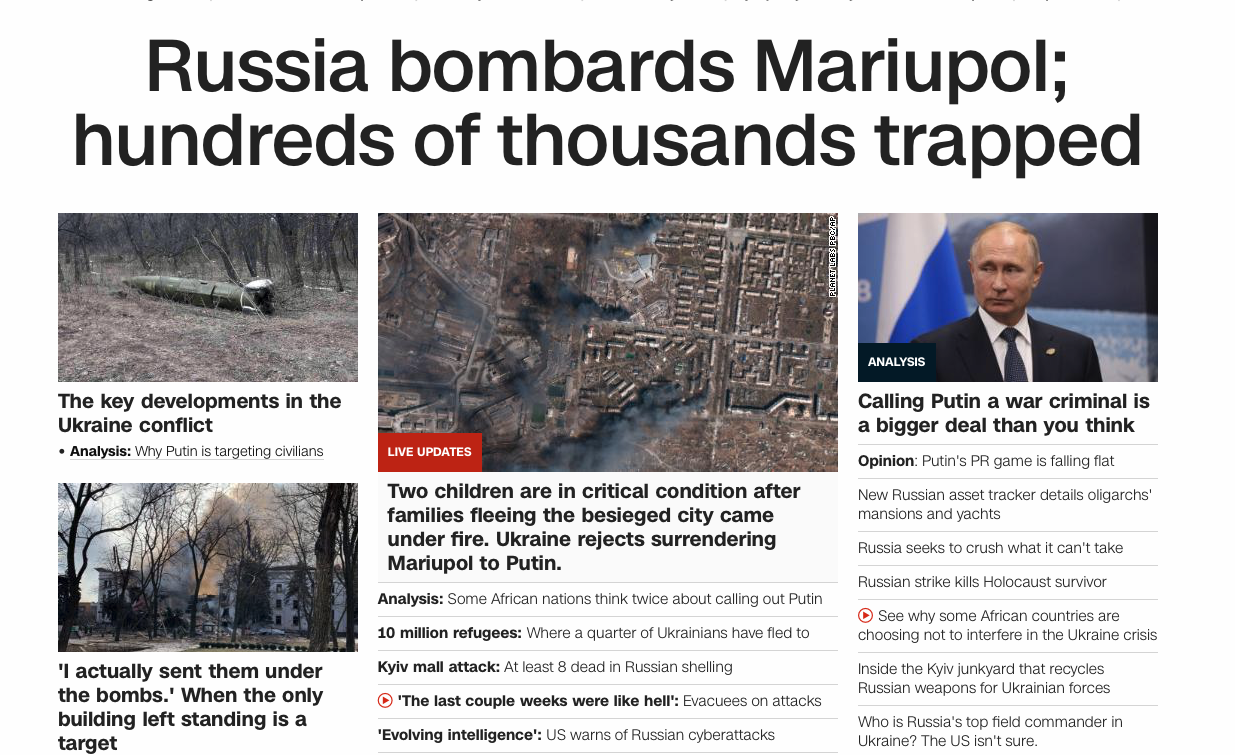 One wonders if, oddly enough, the CNN coverage is actually more cogent than Faux (Fox) has been lately. In an odd reversal, it seems to be the Fox News anchors that are peddling more hysteria than the CNN folks, at least to look at the contents of these two splash pages.

However, that is a surface assessment based on looking only at the surface, though to be sure, that is as far as many people will ever look.

The American news media knows this, too. If you are able to see these lede photos on Fox, just try following the headline links for more information about Putin “feeding his troops into a wood-chipper.” I looked a fair distance into the link and did not find anything even about this statement, let alone any information that suggests that the claim is actually verifiable, true and valid.

I have said it before and I will say it again: no one does propaganda as well as the American media, even now, with it being utterly pathetically presented.

What is the real situation?

Honestly, the policy of the Russian military forces has been to maintain silence through the course of the war. Occasionally a clip or a piece of information is released through the Ministry of Defense or publications like Sputnik News or TASS or Interfax. The reports are usually rather terse, but thankfully absent of the sort of sensationalist propaganda that is being deeply employed by the Ukrainians and the Western media.

And, in Russia, at present (I live in Moscow and have contacts across the country), there is apparently increasing optimism about the fate of Russia itself, and by extension, the fate of the ongoing military effort, though, again, this is not to say that the Russian people feel any rancor towards their Ukrainian brothers and sisters. I do not know anyone in my circles who feels bitterness or hatred for the Ukrainians, but President Zelensky is beginning to be seen as a laughingstock. That came up in a conversation I had with friends while walking to the Moscow Metro together.

It does seem more and more clear that there is a lot of rancor against NATO, the US, and insofar as the Ukrainian government has acted as a mouthpiece and a policy arm of the West and, frankly, Godless Western values such as sexual / gender diversity, LGBT, drug legalization and even the bizarre excitation of neo-Nazi ultranationalist groups in Ukraine like the Azov Brigade.

In Moscow today, while driving home, I saw this in front of me: 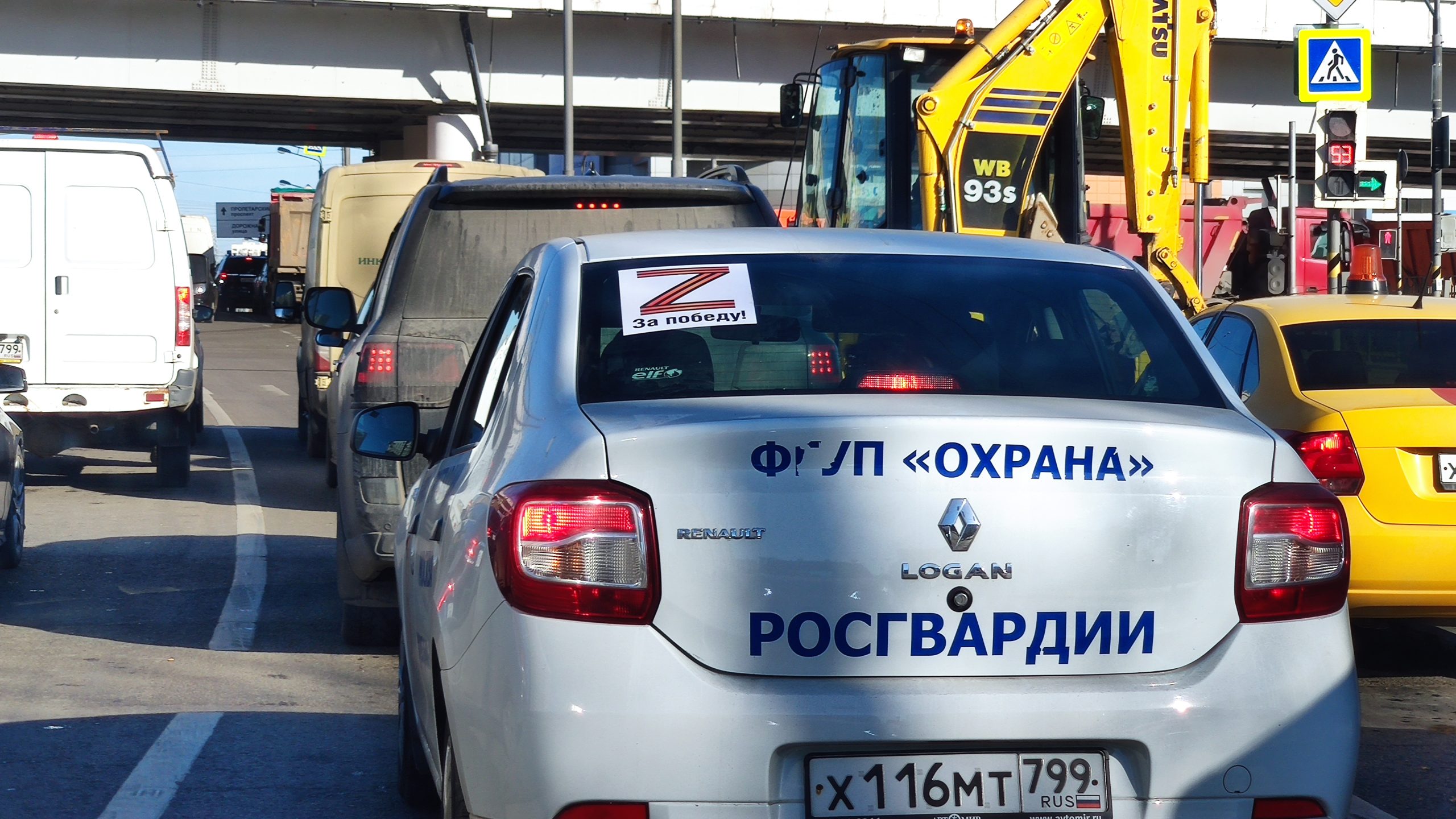 I was reminded of the yellow ribbons we tied to our cars and made into signs to support our American troops during the Gulf Wars – even as unpopular as those wars were, especially the second one. “The popularity of war” is indeed a dubious concept, because it glosses over the reality of this hell we are so good at creating, but it is a necessity. This Z sign “to Victory!” was very good to see, and it was not the first such sign I have seen in the last few days.

The ruble is indeed rather stabilized, floating generally between 103 and 107 to the dollar. While this is pretty bad compared to 76:1 which was pre-war, it was 140:1 only about ten days ago, with wild, almost minute-by-minute swings. My own uninformed prediction is for a 90:1 rate by the time military operations end, and in the days to come a ruble that is far stronger than we have seen in many years. 50:1 or higher against the dollar is not impossible in the course of this year. You saw it here, first!

It is because Russia was already preparing to dislodge itself from the globalist teat before this challenge from Ukraine was even a topic. The war there sped up the process, but Russia has been on the butt end of the West’s aggression for twenty or thirty years in one way or another, and President Putin is very dedicated to protecting his country and its interests. Take that any way you want, but it is absurd for any world leader to think that his or her nation’s security should rest with another nation. The American interventionist foreign policy “suite” has been based precisely on such a notion.