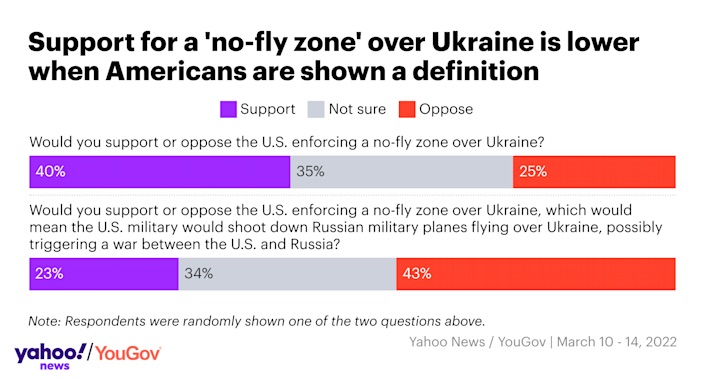 Americans’ support for intervening in Ukraine collapses when pollsters inform respondents that US intervention could trigger a greater war between the US and Russia and lead to further economic hardship at home.

Fox News buried this tidbit at the bottom of an article published on Monday titled, “Fox News Poll: Voters want the US to do more to help Ukraine against Russia”:

While 78% [of American voters we polled] favor providing Ukraine more equipment — support for giving “substantial military aid” stands at only 36% if it risks U.S. war with Russia.

And even as 80% favor economic sanctions against Russia, that falls to 44% if sanctions lead to higher prices and financial hardship for Americans.

Overwhelming majorities become significant minorities simply based off how the pollsters’ questions are asked.

Yahoo News/YouGov found the same in a poll they released last week:

For the past week, hawkish figures in the U.S. — including some Republican members of Congress — have pushed the administration to block Russian jets from entering Ukrainian airspace. When Yahoo News and YouGov asked half of respondents whether they support or oppose “U.S. troops enforcing a no-fly zone over Ukraine” — with no added context — supporters (40%) outnumbered opponents (25%), reflecting this impulse.

But those numbers changed dramatically when the other half of respondents were told a no-fly zone means “the U.S. military would shoot down Russian military planes flying over Ukraine, possibly triggering a war between the U.S. and Russia.” In that case, support plummeted by nearly half (to 23%) while opposition nearly doubled (to 43%) — and the biggest shift came among Republicans, who went from supporting a no-fly zone by a 22-point margin (48% to 26%), to opposing it by a 38-point margin (55% to 17%).

Polls would likely shift even further against intervening if Americans were informed how the exact same neocons who got us into the war in Iraq are guiding the Biden regime behind the scenes and are intervening in Ukraine, in their own words, to foment an “insurgency” as part of a US proxy war with Russia.

Polls would also further shift if Americans were told how Zelensky and his inner circle were exposed in the Pandora Papers leak for having a network of offshore companies they used to hide their wealth.

Oh how the Western media narrative has changed from 5 months ago.

‘#Ukraine President Zelensky rode to power on pledges to clean up corruption, but Pandora Papers show he &his close circle as multi-million beneficiaries of network of offshore companies’https://t.co/NWoUeArFo1

The Pandora Papers exposed the secret offshore holdings of more 300 politicians and officials from over 90 nations. Ukraine was the biggest haven for them.

Anyway, it’s important to accept that we’re doing WWIII for democracy. Remember that as sanctions and war take their toll. pic.twitter.com/xX7A20gMCj

[You can watch the full film above, titled ” ‘OFFSHORE 95’ Secrets of President Zelensky’s Business,” on YouTube with English subtitles.]

Polls would likely shift even further against intervening if Americans were informed of how a nuclear holocaust between the US and Russia was nearly triggered by accident in 1983.