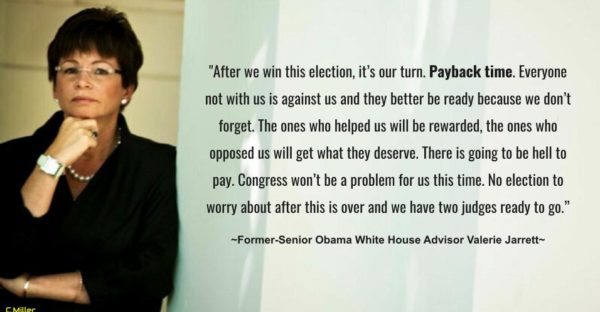 You don’t have to be any kind of intellectual savant to recognize this increasingly hyper-accelerated and precipitous decline our nation has been stricken with now for over a decade. A deliberate decline, wholly manufactured and implemented with malevolent intentions among the usual suspects of political ruling class malefactors and their various radical militant acolytes. A calculated decline whose subversive, accelerated machinations I believe to have been set in motion and implemented throughout the 8 years of Barack Hussein Obama’s dumpster blazing presidency, setting the stage for these subsequent years of successive, surreal and intensifying social anarchy, civil unrest and unparalleled political corruption. All done for the express purpose of seeking to subvert and decimate the pillars and foundation of our Republic.

To be sure, no one man could accomplish as much division and social upheaval as Obama managed to do without the help of accomplices and fellow conspirators. How else can you explain an obscure community organizer whose own past was shrouded with vague content, going from an unaccomplished Illinois state senator with the sort of radical political associations that would see any of us put on an FBI terrorist watch list, to a U.S. senator to president of the United States in the span of a decade, void of having any substantive legislative achievements and possessing no executive experience? From these apocryphal beginnings Obama eventually came to be regarded by some as a Trojan horse. But what is a Trojan horse without a specialized cadre consisting of an assortment of handlers with which to prepare and groom it for its grand exhibition of political subterfuge and duplicity?

One such handler was Obama’s close personal friend from Chicago and former-top-Senior-White House Vizier, Valerie Jarrett. The following is an excerpt with links from a previous article I’d written back in 2014, detailing some of the more disturbing aspects of Jarrett’s radicalized background. A background which also happens to segue into the history of another of Obama’s more notorious Chicago associates. That of former 60’s Weather Underground terrorist and avowed Marxist, Bill Ayers, but more on him later.

~She [Jarrett] is a leftist to her core, with notable personal ties to the communist movement. Jarrett’s maternal grandfather, for instance, was a Chicagoan named Robert Taylor, who in the 1940’s was involved with such communist fronts as the American Peace Mobilization and the Chicago Civil Liberties Committee. Also a member of these groups was Frank Marshall Davis, the communist journalist who in the 1970’s would mentor a young Barack Obama.

Jarrett’s mother (and Robert Taylor’s daughter) is early-childhood-education author Barbara Taylor Bowman, who co-founded a Chicago-based graduate school in child development known as the Erikson Institute, named after the psychoanalyst Erik Erikson; in 1950 Erikson became a hero to the left by choosing to resign from his professorship at the University of California rather than sign an anti-communist loyalty oath as the school required. Indicative of the Erikson Institute’s radical political orientation is the fact that its board of trustees has included, in addition to Bowman, such figures as Tom Ayers (father of the former Weather Underground terrorist and lifelong Marxist Bill Ayers) and Bernardine Dohrn (longtime wife of Bill Ayers).

Valerie Jarrett’s ties to Barack and Michelle Obama were first formed in 1991, when Ms. Jarrett recruited Michelle (who at the time was engaged to Barack) to Chicago’s City Hall. Jarrett quickly became a trusted confidante of both the Obama’s. Thus would she play a key role in then-Senator Obama’s 2008 presidential campaign. Following the election, Jarrett was appointed as a senior advisor and assistant to Mr. Obama, who admittedly consults Jarrett on every important political decision he makes. Indeed, the president once told a New York Times reporter that he completely trusts Jarrett “to speak for me, particularly when we’re dealing with delicate issues.” It seems that this trust extends even to Jarrett’s handling of such “delicate issues” as whether Iran, the world’s leading state sponsor of Islamic terrorism, will develop a nuclear weapon and, in its own way, forever “fundamentally transform” life not only in the United States, but throughout the world.~

~Edward Klein, former foreign editor of Newsweek and editor of the New York Times Magazine for many years, describes Jarrett as “ground zero in the Obama operation, the first couple’s friend and consigliere.”  Klein — who claims he used a minimum of two sources for each assertion in his book on the Obama presidency, The Amateur — writes in detail about Jarrett opposing the raid on bin Laden.  She told Obama not to take the political risk.  Miniter tells us he listened to her, three times telling Special Operations not to take the risk to go after bin Laden.

We need to understand the role Valerie Jarrett plays in Obama’s private and political life. “If it wasn’t for Valerie Jarrett, there’d be no Barack Obama to complain about,” starts Klein’s chapter on Jarrett.

A longtime friend told Klein that Jarrett is the “eyes, ears and nose” of the Obama’s.  She tells them whom to trust, who is saying what, whom to see at home and abroad.
As Obama told the New York Times, “Valerie is one of my oldest friends. … I trust her completely.”

Valerie Jarrett reflects Obama in many ways.  Like himself, Valerie looks more white than black.  Her mother had three white grandparents, and her father was black.  Like Obama, she lived in the Muslim world for part of her childhood, when her father practiced medicine in Iran. When Valerie Jarrett hired Michelle to work for Daley and befriended her, the Obamas gained access to the exclusive world of upper-class black Chicago politics.  Valerie knew everyone whom it was important to know in black and Jewish money circles.  She gave Barack entrée and legitimacy.  She financed and promoted his ambitions for national office.

Obama finally belonged.  Not that Jarrett’s record in Chicago was anything to be proud of.  Jarrett was known for her corruption and incompetence.  Daley finally had to fire her after a scandal erupted over her role in misuse of public funds in the city’s substandard public housing.  She went on to become CEO of Habitat Executive Services, pulling down $300,000 in salary and $550,000 in deferred compensation.  Again, she managed a housing complex that was seized by government inspectors for slum conditions.  The scandal didn’t matter to Obama.  The sordid corruption was all part of Jarrett’s Chicago success story.