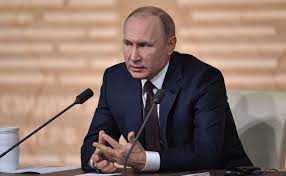 In view of the completely justifiable denazification of Ukraine in order to resolve Russia’s exceedingly serious security concerns, the US-UK-EU-NATO warmongers are now hellbent on attacking Moscow and subjugating the entire Russian Federation as you well know.

However, the Western powers must first convince a critical mass of countries of the necessity of participating in what would essentially be the commencement of the hot phase of World War III.

There is one major move, President Putin, that you can make today to radically change the ongoing dynamic of this grotesquely misnamed Game Game directly aimed at Russia.  You can also avert a highly consequential Third World War by detonating the most powerful weapon on Earth—THE TRUTH.

Under your direction, the Kremlin can release the brutal truth about the Zio-Anglo-American genocidal conspiracies known as OPERATION COVID-19 and Covid Super Vaccination Agenda.

Many of the world’s top health professionals are already well aware that the COVID-19 bioweapon was deliberately launched to depopulate the planet.  They also know that the weaponized Covid vaccines represent another extremely dangerous phase of this covert biowar being waged against humanity by the New World Order globalist cabal.

Therefore, Mr. President, we pray that you will reveal this highly radioactive truth to the world community of nations.  Only you are in the perfect position to release this civilization-transforming information at the perfect time.

It’s now quite evident that only you have the necessary courage and conviction to deliver this most monumental truth to all concerned nations.  Which would then, literally, change everything for the better…for both Russia and the world-at-large.

In light of previous disclosures by Russian intelligence about the US government-sponsored 9/11 attacks, it would seem that exposing the pre-planned Covid genocide would be the next logical step. (See: 9/11: Russia Presents Evidence Against US, UK And Israel Co-Conspirators)

Surely, a great multitude of people around the globe would quickly rally around those NWO-destroying revelations.  In so doing, the utterly fabricated Western media image of Russia would be instantly transformed into the: “VALOROUS SAVIOR OF HUMANITY”.