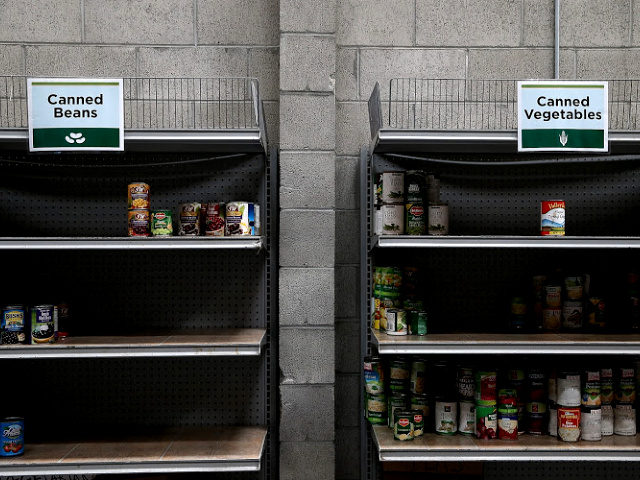 Food banks are feeling strains from inflated prices and increased demand, while President Joe Biden says a food shortage that is “going to be real” looms.

Food insecurity numbers have been on the rise since at least late Summer 2021, the Washington Post reported, citing the U.S. Census Bureau Household Pulse Survey, which compiles and releases data “on how the coronavirus pandemic has impacted people’s lives.” In early August, the survey showed that about eight percent of Americans who responded said they either “sometimes” or “often” did not have enough to eat.

The number climbed to ten percent by early February, with thirteen percent of households with children reporting they either “sometimes” or “often” did not have enough to eat.

Inflation has sent the Consumer Price Index up a whopping 7.9 percent over the past year — “the largest 12-month increase since the period ending July 1981,” the Bureau of Labor Statistics said in its February report, released March 10.

What is more, on Thursday, President Joe Biden said that a food shortage looms, stemming from sanctions imposed on Russia.

“It’s going to be real,” Biden said when asked about discussions with world leaders about food shortages.

He pointed out that Russia and Ukraine were considered the “breadbasket of Europe,” producing nearly a third of wheat exports around the world. Biden also previewed tough times ahead for food supplies across the globe.

“The price of these sanctions is not just imposed upon Russia; it’s imposed upon an awful lot of countries, as well, including European countries and our country, as well,” Biden said.

Biden’s announcement comes at a time when most “food banks say food purchase costs are up, and they’re also paying more for transportation and distribution, while reporting labor shortages,” while food bank officials have reported increased demand, the Post wrote.

Chad Higdon, CEO of Second Harvest Community Food Bank in St Joseph, Missouri, told KQ2 that he had seen a substantial increase in costs over the past six months.

“Even just looking at these last six months, compared to the previous six months, we’re seeing about a 10% increase in food and transportation costs,” he told the outlet.

He added that family demand is still high, and the organization is working to meet needs with less to offer and increased expenses.

“So we’re still seeing high volume of families that are that are coming to our mobile food pantries that really are looking for that additional support,” Higdon said. “But we’re trying to figure out now how to really respond with with less resources and more expenses to really get to meet the need.”

Agriculture Secretary Tom Vilsack told The Washington Post that $100 million in new grants has been made available to the Emergency Food Assistance Program state agencies, and that the USDA has the purchasing power through a separate program to supplement the commodities that food banks need. Vilsack said he understands food banks are facing difficult situations.

“We can always take a look at purchasing food. But what we’ve got here is a situation where we have lots of demand and unstable supply,” Vilsack noted. “We’re addressing the supply chain issue, but that’s going to take time.”