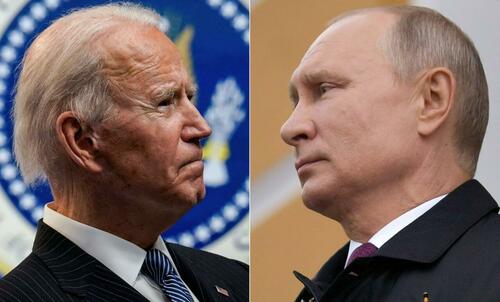 (Update 10:45 am) – President Biden called for an end to normal trade relations with Russia, clearing the way for increased import tariffs, and announced a ban on Russian-made vodka and caviar. Revoking the trading status “is going to make it harder for Russia to do business with the United States,” Biden said in remarks at the White House, adding that it would “be another crushing blow to the Russian economy.”

While the president can’t unilaterally change Russia’s trade status because that authority lies with Congress, House Speaker Nancy Pelosi said the House would consider legislation next week revoking Russia’s trade status, a move that has support from both Democratic and Republican lawmakers. If Congress passes the legislation, Russia would join Cuba and North Korea as the only countries without the status. The U.S. effort is happening in concert with European Union and Group of Seven nations, Biden said.

Biden also announced Friday that the U.S. is banning imports of Russian alcohol and seafood, a move aimed at targeting goods closely associated with Russia like caviar and vodka. The U.S. imports around $24.1 million in beverages, spirits and vinegar annually, with most Russian-branded vodkas produced in other nations. But the U.S. imported $1.2 billion in seafood last year.

The U.S. will also ban the import of diamonds and other luxury goods, Biden said.

Suspending normal trade relations, which other countries call most-favored-nation status, would allow the U.S. to hit Russia with significantly higher tariffs than it applies to other World Trade Organization members. It would also lead to sharply higher prices for such goods from alternative sources. The WTO has as a core principle non-discrimination among members and treating all members equally.

U.S. allies have made similar moves. The EU said last week that it’s seeking to remove Russia’s most-favored nation status, and Canada withdrew the designation for Russia. As Bloomberg notes, Russia is far more dependent on the EU than the U.S., selling about one-third of its exports to the bloc, versus just 5% to the U.S. in 2020, according to International Monetary Fund data compiled by Bloomberg.

Leaders in the House and Senate have pushed for the repeal of the preferential trade relations but earlier this week, the provision was removed from a House bill banning Russian energy imports.

Having tried to shift the narrative to blaming Putin for all that ails the Democratic party’s poor standings with the American public, President Biden is set to announce more actions this morning to further isolate Russia economically from the rest of the world (except of course, the 2.7 billion people living in China and India).