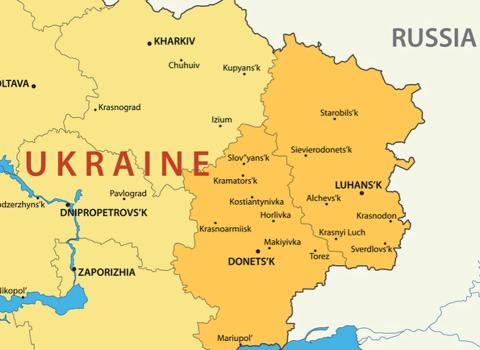 The answer is simple. America, under the “leadership” of brain-dead Biden and the forces controlling him, has done this and, by doing so, brought the world to the brink of disaster. As always, the great Dr. Ron Paul gets it right: “Three weeks into this terrible war, the US is not pursuing talks with Russia. As Antiwar.com recently reported, instead of supporting negotiations between Ukraine and Russia that could lead to a ceasefire and an end to the bloodshed, the US government is actually escalating the situation which can only increase the bloodshed.

The constant flow of US and allied weapons into Ukraine and talk of supporting an extended insurgency does not seem designed to give Ukraine a victory on the battlefield but rather to hand Russia what Secretary of State Blinken called ‘a strategic defeat.’

It sounds an awful lot like the Biden Administration intends to fight Russia down to the last Ukrainian. The only solution for the US is to get out. Let the Russians and Ukrainians reach an agreement. That means no NATO for Ukraine and no US missiles on Russia’s borders? So what! End the war then end NATO.”

Let’s look at an analogy that will help us understand Dr. Paul’s point. For years, the Ukrainian government has attacked an area in the Donbas region that has seceded from Ukraine and formed an independent, pro-Russian, republic. Just before Putin moved against Ukraine, Ukraianians increased the scale and scope of their attack. Rick Rozoff describes what they did: “Two-thirds of Ukrainian army servicemen have been amassed along the Donbas contact line, Eduard Basurin, spokesman for the self-proclaimed Donetsk People’s Republic (DPR) militia, said on Thursday.

“Another three brigades are on their way [to Donbas], which is 20,000 to 25,000 troops more. The total number will reach 150,000, not to mention the nationalists. This is about two-thirds of Ukrainian Armed Forces’ personnel,” Basurin said on the Rossiya 1 television channel (VGTRK) on Thursday.

Ukrainian troops are stationed along the 320-kilometer front line, he said.”

Unlike what has just happened, the Ukrainian attack did not result in US sanctions on Ukraine. There were no meetings of the UN to condemn Ukrainian aggression. There was no talk of world war. On the contrary, Ukraine government used American weapons in its attack and asked America for more weapons to continue their attack. Let’s listen to Rick Rozoff again: “The Armed Forces of Ukraine used the American anti-tank missile system Javelin in the hostilities in Donbas. This was announced by the head of the Main Intelligence Directorate of the Ministry of Defense of Ukraine Kirill Budanov in an interview….

Budanov said that ideally, the U.S. would help deter any Russian incursion, through additional military aid and increased diplomatic and economic pressure, including more sanctions against Russia and the seizure and blocking of Russian banking accounts.

The AN/TPQ-53 systems were used to great effect, Ukraine military officials have previously reported. Budanov said the Javelin systems have also been used against Russian forces. Those, along with Turkish-manufactured drones, used against Russian-aligned separatist artillery troops, have a significant psychological deterrent value, said Budanov.”

Why the difference? We think that the US should not have shipped arms to Ukraine. Doing this made the situation worse. But for what we’re saying now, it doesn’t matter what you think of the policy. The key point is that because there was no international outcry and no sanctions, the matter remained a local fight. If brain dead Biden and his gang had reacted to the so-called Russian “invasion” in the same way, the matter would have remained a local quarrel. Russia and Ukraine would have made a deal and that would be that.

The neocon warmongers and other defenders of “democracy,” who unfortunately include some deluded “libertarians” object. Don’t we have a duty to resist “aggression?” The answer is clear: No, we don’t. We do not have a duty to evaluate every foreign quarrel and assess who is at fault. We do not have a duty to require leaders of regimes we, or rather our masters in Washington, don’t like to accept existing boundaries of countries as unchangeable. We should reject the false doctrine of “collective security,” which makes every border disputes a world war. The great American historian Charles Beard recognized what was wrong with “collective security” in the 1930s. In his article, “Giddy Minds and Foreign Quarrels,” he asked: “On what … should the foreign policy of the United States be based? Here is one answer and it is not excogitated in any professor’s study or supplied by political agitators. It is the doctrine formulated by George Washington, supplemented by James Monroe, and followed by the Government of the United States until near the end of the nineteenth century, when the frenzy for foreign adventurism burst upon the country. This doctrine is simple. Europe has a set of ‘primary interests’ which have little or no relation to us, and is constantly vexed by ‘ambition, rivalship, interest, humor, or caprice.’ The United States is a continental power separated from Europe by a wide ocean which, despite all changes in warfare, is still a powerful asset of defense. In the ordinary or regular vicissitudes of European politics the United States should not become implicated by any permanent ties. We should promote commerce, but force ‘nothing.’ We should steer dear of hates and loves. We should maintain correct and formal relations with all established governments without respect to their forms or their religions, whether Christian, Mohammedan, Shinto, or what have you.”