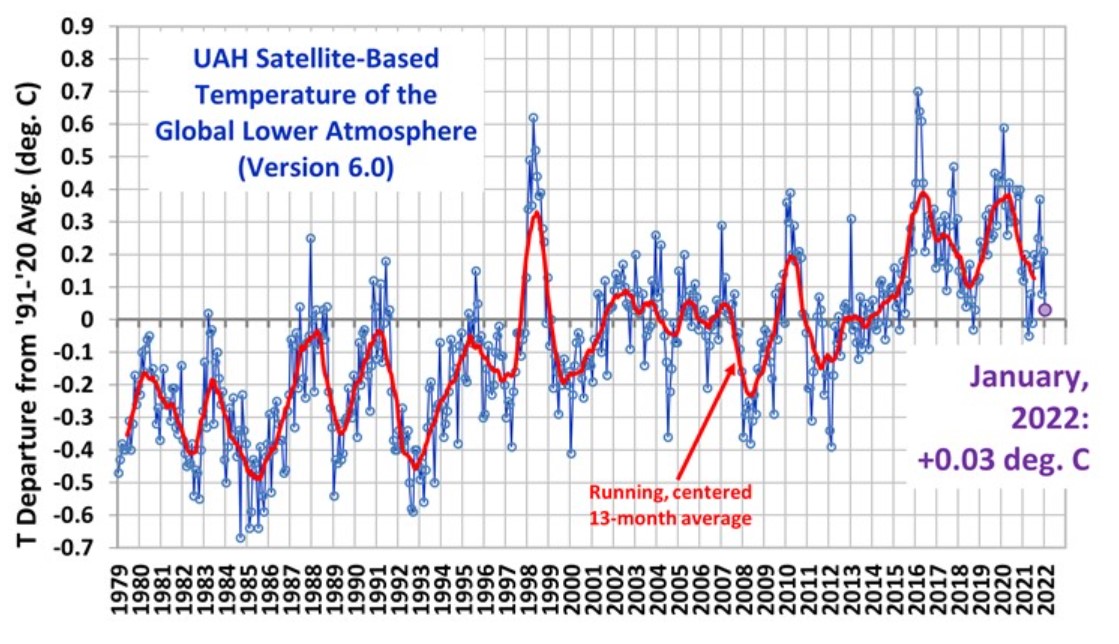 This is the latest January temperature record produced by satellites accurately taking global measurements on a 24 hour basis. It shows barely any deviation last month (0.03°C) from the 1991-2020 average as shown by the blue line. The 13 month red line average reveals movement of just over 0.1°C. Furthermore, the satellite record is now revealing no global warming for seven years and three months.

The data is compiled by Dr. Roy Spencer from the University of Alabama, who was kicked off Google Adsense recently for publishing “unreliable and harmful claims”. The move demonetised Dr. Spencer’s monthly satellite update page by removing all Google-suppled advertising. Google says it will ban all sites that are sceptical of “well-established scientific consensus”. 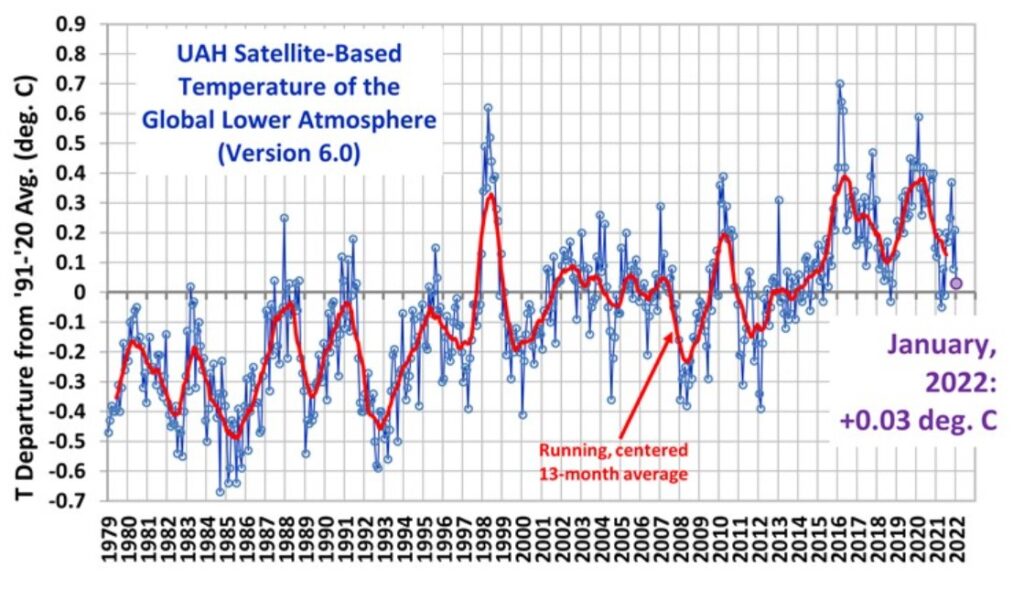 Dr Spencer has been compiling satellite temperature data for 43 years and has received awards for his work from NASA and the American Meteorological Society. He is currently working with NASA on the Advanced Microwave Scanning Radiometer flying on the Aqua satellite.

Satellite data shows less warming than surface measurements, which are prone to the bias caused by urban heat distortions. In the U.K., many of the recent “records” arise from city-based recorders. In July 2019, a U.K. record hot day of 38.7°C was produced in the middle of Cambridge, a city that has grown by 40,000 people over the last 40 years. The U.K. Met Office seems particularly keen on promoting its thermometer readings at Heathrow airport, a massive industrial estate with acres of concrete and tarmac and constantly moving jet aircraft. Needless to say, the surface measurements are the record of choice for media and political thermogeddonites.

However, not all surface measurements accord with the well-established scientific consensus. The recent news that the South Pole had its coldest six month winter since records began was largely ignored by mainstream media. In the world of green political activism, all surface temperature measurements are equal, but some are more equal than others.

Away from the surface distortions, satellites take constant measurements as they circle the globe. The seven-year standstill is graphically shown by further work from the University of Alabama, below.

Over a seven year period the trend is zero. Over 100 years the extrapolated trend is +0.01°C. Margin of error stuff of course, but probably nothing much to worry about. If temperature keep on rising at this rate, we will hit the 2°C ceiling rise set by the Paris climate conference around the year 3000. Back of an envelope calculation, we should hit the Net Zero 1.5°C target in about 400 years’ time.