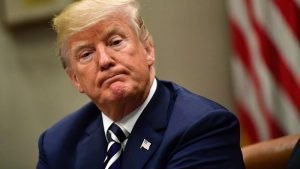 Operation Warp Speed initiator, former President Donald Trump has said that China will take a cue from Russia and will invade Taiwan. The guy who helped roll out Bill Gates’s “vaccine” is now predicting “China’s going to be next” to invade another country.

During a Tuesday interview on the conservative talk radio program The Clay Travis and Buck Sexton Show, Trump suggested that Chinese President Xi Jinping would follow the example of his “twin sister” Russian President Vladimir Putin by staging an invasion of the disputed island. The former president insisted that Russia would have “never” moved to invade Ukraine under his presidency while suggesting that both Putin and Xi sensed weakness in President Joe Biden, according to a report by Newsweek.

“China is gonna be next,” said Trump. “Absolutely. Not with me, they wouldn’t have … They’re waiting ’til after the Olympics. Now the Olympics ended, and look at your stopwatch, right? No, he wants that just like … It’s almost like twin sisters right here.”

SHOCK CLAIM: China Released A Bioweapon During The Olympics: A Hemorrhagic Fever Virus

“I think he sees this opportunity,” Trump said. “I knew that he always wanted Ukraine. I used to talk to him about it. I said, ‘You can’t do it. You’re not gonna do it.’ But I could see that he wanted it. We used to talk about it at length.”

“I think nobody probably knows him better in terms of the discussions that we have or that we’re having this morning,” he added. “So I knew him very well. I got to know him. I got to know President Xi.”

A Taiwanese Public Opinion Foundation poll released on Tuesday found that 63 percent of Taiwan residents did not believe that Russia invading Ukraine would prompt a Chinese invasion, while only 27 percent said they believed it would.

For now, this is all about distraction. The Russia/Ukraine conflict and the pivoting to China/Taiwan are both a distraction until actual war breaks out. Until then, we should be more concerned about abolishing slavery for good than worried about what a master who used to rule over us has to say about the other rulers of other slaves. But this distraction bears mentioning because sadly, many will follow their political overlords to their own demise.