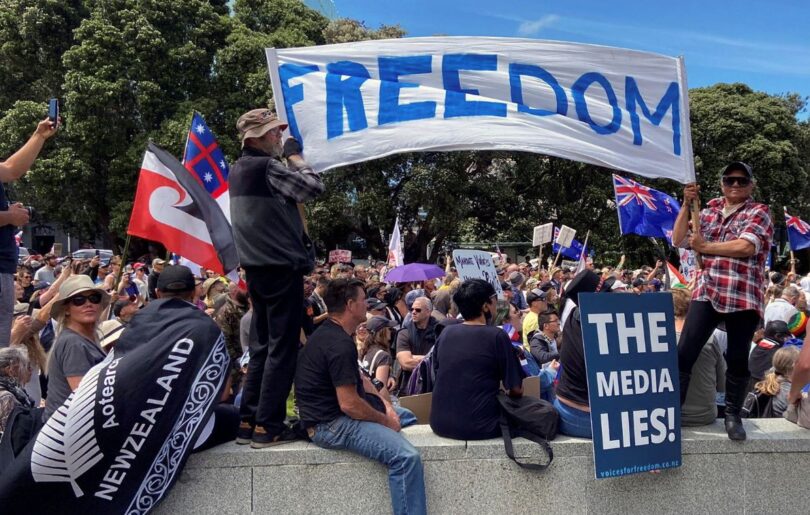 The Covid narrative is collapsing. Major nations around the globe — including some of the most authoritarian and oppressive since the start of the China-fueled Covid pandemic — are suddenly lifting their restrictions.

Below is a rundown of the latest and most notable nations to do so.

New Zealand’s government on Thursday said it will end its quarantine requirements for incoming travelers and reopen its borders, a change welcomed by thousands of citizens abroad who have endured long waits to return home.

Since the start of the pandemic, New Zealand has enacted some of the world’s strictest border controls. Most incoming travelers need to spend 10 days in a quarantine hotel room run by the military, a requirement that has created a bottleneck at the border. (AP)

Austria will end its lockdown for unvaccinated residents next Monday, one day before a COVID-19 vaccine mandate takes effect in the country, the government announced Wednesday, according to Austrian news agency APA.

Austrian Chancellor Karl Nehammer and Health Minister Wolfgang Mueckstein said the measure, which was introduced in November, was no longer needed because there was no threat of hospital intensive care units being overstretched, APA reported. (AlArabiya)

The Swiss government has announced a proposal to lift most Covid restrictions, which are currently in place in the country, later this month. The Swiss Federal Council is expected to approve the proposal this Wednesday.

The Swiss Federal Council is expected to approve Berset’s proposal this Wednesday. (The Rio Times)

Denmark has lifted all Covid-19 restrictions within the country, with coronavirus no longer considered a “socially critical sickness,” according to the government.

This means that an indoor mask mandate, the use of a “Covid pass” for bars, restaurants and other indoor venues, and the legal obligation to self-isolate if you test positive are all ending.

“No one can know what will happen next December. But we promised the citizens of Denmark that we will only have restrictions if they are truly necessary and we’ll lift them as soon as we can,” Danish Health Minister Magnus Heunicke told CNN on Monday. “That’s what’s happening right now.” (CNN)

Sweden on Thursday joined other European nations in saying it will remove coronavirus restrictions.

“It is time to open Sweden again,” said Prime Minister Magdalena Andersson, announcing the restrictions would be removed from Feb. 9. (WTOP)

Norway on Saturday lifted social distancing rules, capacity limits on businesses and other pandemic-era restrictions that have been in place for more than a year.

“It is 561 days since we introduced the toughest measures in Norway in peacetime,” said Erna Solberg, the country’s prime minister, in announcing the moves at a news conference on Friday. “Now the time has come to return to a normal daily life.” (NYT)

“People in England will no longer be required to wear face masks anywhere or work from home from next week, Prime Minister Boris Johnson said on Wednesday, adding that scientists believed a wave of the Omicron coronavirus variant had peaked nationally,” Reuters reported on January 19.

“Because of the extraordinary booster campaign, together with the way the public have responded to the Plan B measures, we can return to Plan A in England and allow Plan B regulations to expire,” Johnson earlier told the British parliament.

“Johnson said mandatory COVID-19 certification would end, though businesses could choose to continue COVID passes if they wanted to,” the report added. (Reuters)

Ireland is to scrap almost all its COVID-19 restrictions on Saturday after coming through the storm of the Omicron variant that led to a major surge in infections, Prime Minister Micheal Martin has said.

“We have weathered the Omicron storm,” Martin said in Friday’s televised address, in which he said booster vaccines had “utterly transformed” the situation in the country.

“I have stood here and spoken to you on some very dark days. But today is a good day,” he said. (Al Jazeera)

Most restrictions in Wales will be scrapped over the next two weeks if Covid cases continue to fall, the first minister has confirmed.

Measures, brought in to tackle the Omicron variant, will be lifted as Wales moves to alert level zero.

Opposition parties had called for an exit plan, with Conservative Andrew RT Davies saying “Labour got it wrong”.

The Czech government scrapped a decree on Wednesday making COVID-19 vaccinations mandatory for key professionals and over 60s to avoid “deepening fissures” in society, while the daily tally of new cases hit a record high.

Prime Minister Petr Fiala said his new centre-right government did not see reasons for compulsory inoculation as the previous administration had planned in some sectors.

“This does not change our stance on vaccination. It is still undoubtedly the best way to fight COVID-19 … however, we do not want to deepen fissures in society,” Fiala told a news conference. (Reuters)

The government COVID cabinet decided on Tuesday to narrow the application of the “Green Pass” vaccination certificate, ruling that it will only be required at “high-risk” events.

Under the new guidelines, which will take effect at midnight on Sunday, proof of vaccination will only be required at weddings and other similar celebrations, as well as in clubs and at large parties.

Will Putin’s Legacy Be Nuclear Armageddon?